Previously I described the city of Metropolis here but here is some more detail on the world of my deco super city. I coined deco punk as i find diesel punk too crude and wanted to feature deco-modernist futuristic design.

I hope to run this as a con game soon and will do some encounter tables. Promising to be a good pulp SF setting or alternate universe. Robots and space travel are just a step away and characters could be involved in some of these wonders first uses.

2026 and the city of metropolis dominated the world economy and houses 52 million persons. Spanning central Europe including Germany, Italy, Austria, Switzerland and France those old nations have come to be dominated by the great city.

But what of the rest of the world?

The novel 1984 I use for Britain during a phase in the 20th century during the great war from 1940-1970. Plague collapsed that regime and turned the former great island nation into a wasteland of warlords and despots bareley able to support aircraft and desperate for fuel and parts to battle each other. Plague victims were shot on sight. This ended 1970 when engineers and mechanics from the Wings over the World organization came to restore civilization to the blighted places on earth from Basra.

While society by 2026 is fairly free and open occasional demagogues take advantage of the mass media used and occasional form dangerous hysterical mobs that the cabal responds poorly too. A faction deny progress and reason and want time to stand still instead of adapting to change. This situation has kept Metropolis the superior power. The Cabal is a kind of anarchist state where oligarchs are selected from best and brightest by aid of computers. These leaders may come short against popular rabble and mobs that sometimes arise and end with destruction of some state project. The state lack the power and will to control the mob and possible foreign agitators take advantage of this. English fashion is very different with capes, new materials and shoulder pads. Black clad military wear suits offering some protection versus bullets.

This is based on HG Wells film Things to come. Has some awesome deco tanks and other tech.

America was less affected by the war and plagues but retreated into itself. WOW had a influence over rebuilding and America was well recovered by 1980. Vast cities of 250 story buildings connected by suspension bridges, with air transport extremely common for personal use. Eugenics and social engineering have taken control during the great war, now all are ruled by the Tribunal in the name of impersonal science. Names are replaced by numbers. The population take pills for food and recreation and are governed by petty red tape and regulation and at times heartless engineers. Babies are produced by state incubators from machines for married couples. The Tribunal dictate who marries who giving preference to high achievers.

Despite this control and supposed objective social strata, the super rich thrive and compete with the Metropolis bank and prey on the underdeveloped world. Outside the great sprawls of the east and west coast and a few other mega cities is largely wilderness with automated factory farms and those who reject modern life living like hill billies still subject to the great plagues left from the great war.

As a hat tip to the King in Yellow suicide booths are in public parks.

The film Just Imagine I am using for America. Has awesome Hugh Ferris inspired design.

W.O.W. in Russia worked with the remains of the Soviet Union to produce a great worker paradise, free from rich elites. While great cities do exist they are crowded, with often collapsing infrastructure, shortages and highly polluted. Areas are still plague ridden and underdeveloped with huge refugee camps and resettlement programs and backward technology. Still trying to influence the underdeveloped world and at odds with America and European agents of Metropolis. Get on better with England, a major trading partner. Vie for control with Metropolis over crumbling eastern Europe which never recovered from the war fully. They still speak of world revolution and have a strong patriotic streak despite their poorer living standards compared to the powers of the English Cabal, European Metropolis and the American Tribunal. 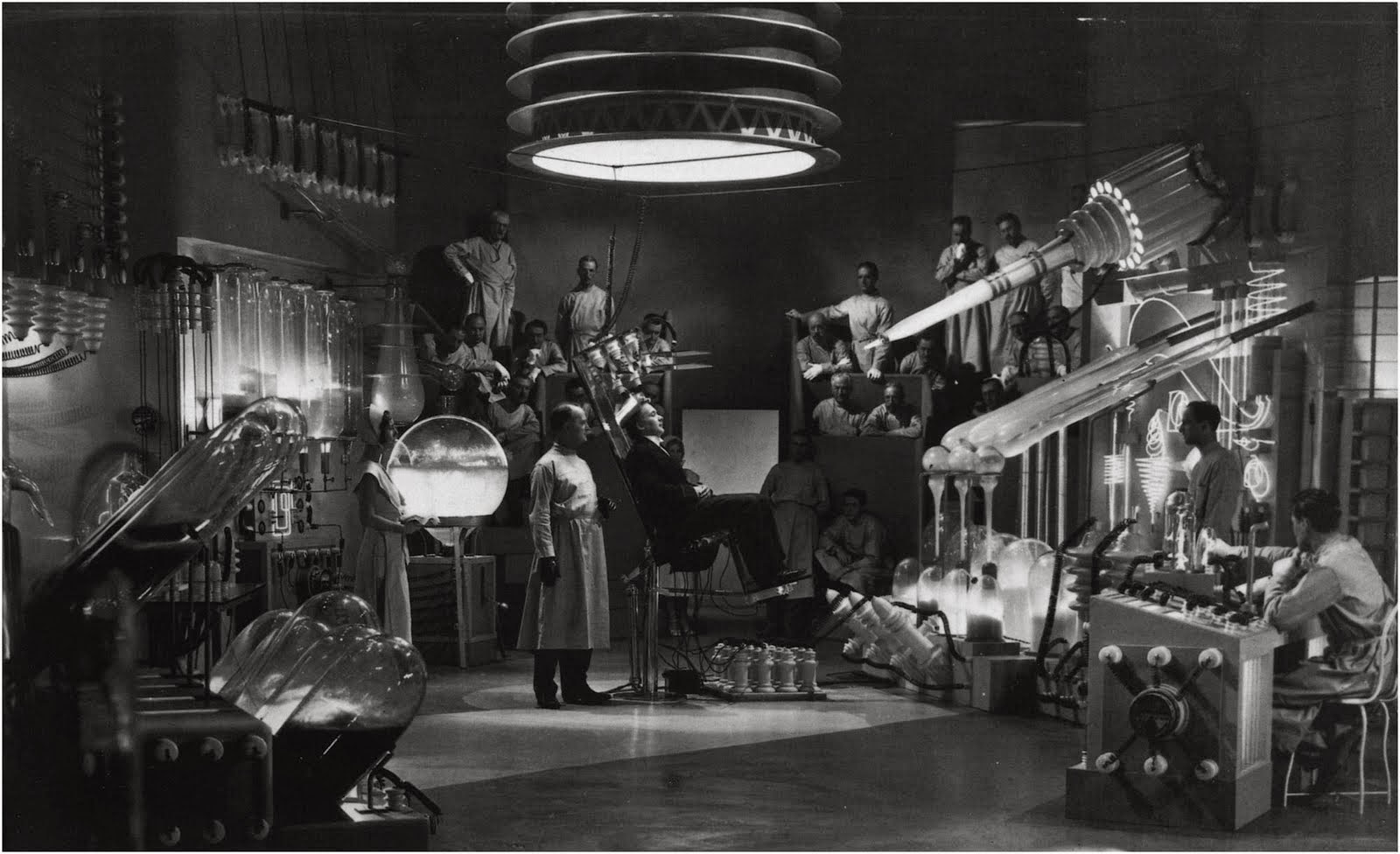 The space race is also on with Briton developing a space gun, Metropolis a moon mission, Russia and America aiming at Mars. The moon is a barren place occupied by insectoid selenites who dwell in great underground fungus forests and crystal cities. Mars has advanced decaying cities ruled by decaying science priests and royalty who watch earth with great fear and suspicion through telescopes. Aelita the Queen of mars watches with fascination but the science priests fear contamination from earth and its more egalitarian ways. Outside more primitive peoples live in strange jungles including a race born twins who dwell in separate tribes from birth that wage war against each other pointlessly. Primitive orangutang like ape men are employed as slaves and entertainers by these savage twin people. Radio from mars is occasionally picked up spurring men to visit.

Mars and Russia in part based on film Aelita and Just Imagine. 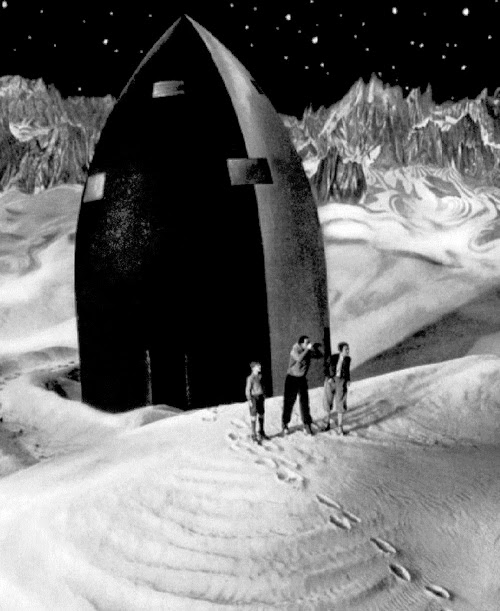 Old popular mechanics are good tech inspiration for "new" technology. Cars have not advance too much nor planes but autogyros capable of short landings on rooftops are common. Airships are the most successful long distance travel but airliners and bombers can fly world wide. Guns are rare in the developed world and have also not developed much. The American have a .22 automatic pistol with a large magazine capacity of 30 shots with a box like appearance.

Androids and Robots are just starting to appear. Russom's Universal Robotics have made progress with metal men but men derived purely from chemicals, more lifelike with synthetic flesh have been developed and are helping to re-develop Czechoslovakia. The downside is the androids are increasingly human and elites are replacing workers and have come to prefer them as lovers. In the rest of the world robots and androids are still exotic but after the events in Metropolis will become more common. 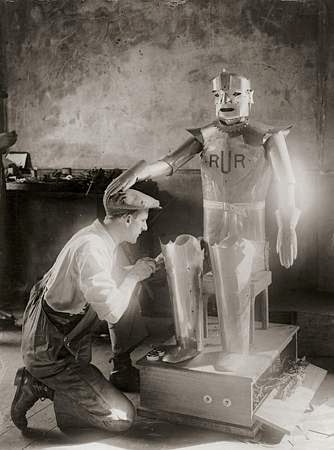 Africa, Asia, Latin America and Australia are messes with some modern cities heavily supported by the great powers or W.O.W.

Warlord controlled regions and backward wastelands are still dominant. In Africa a species of semi intelligent giant newts 4-5 foot high have been trained to perform menial tasks and are edible and have been used in some areas in Africa. A few have claimed these creatures might have souls and feelings. Some have even been trained in underwater welding and construction.

Some Japanese city states have adopted Robots also in a push to join the great Powers, even invading China and competing with the great powers. Finland is a pocket of advanced technology that struggles against the Soviet Union.

Sydney is a great Deco city of the south and famous for its huge 3 way bridge with huge tower built on a harbour island.

Some explorers in depopulated plague zones have discovered isolated communities, underground bunkers, mutants and other strange things. Many mysteries await.

Karol Capek wrote RUR and War with the Newts two very awesome works I recommend. He invented the word robot.
.
Film Aelita on utube famous for constructivist sets of Mars
Just imagine on utube a musical comedey with amazing Hugh Ferris cityscape
Things to come on utube HG Wells hated Metropolis so he made this

City on Mars and its people

Posted by Konsumterra at Friday, February 21, 2014