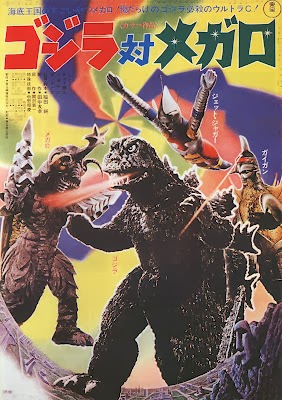 Kaiju good for planet Psychon or  super heroes or whatever. I'm a bit inspired by Marvel Monster era comics.

A Kaiju isn't just a friggin huge thing to kill, they should be able to cope with deadliest gammaworld weapons. They could also be a dungeon waiting to happen. Rescue the crown from the kaiju tummy and sake the rightful rulers? Ear canal of kaiju? Perhaps their mouth is a hellgate like in medieval art? Best avoid being eaten in all cases.

In a Kaiju story evidence of beast is often found, with increasing clues till a sighting. Usually an attack on a settlement follows with beast heading to greater urban centers and fighting a military force. Sometimes the monster carries parasite monsters, might battle or team up with other monsters or have scientists devise a super weapon. Aliens may meddle in kaiju affairs too, seeking to control, kidnap, eliminate or trap them out of the way. Kaiju mostly are dumb but can sort of communicate.

I ran a kaiju game of MARVEL with 100 foot tall monsters where players mostly played the human contacts till fight time when every player would pull out their monster. Set in world over run by monsters setting was very fun.