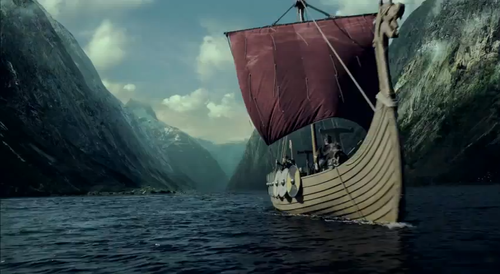 The Stonedale Clan:
Breidr the Dauntless, a handsome farmer lad.
Thorhaddr the lame, a clumsy unlucky boy training to be a poet.
Alrek the Unruly a strong, handsome and outspoken hunter.
Hrafn his quieter brother (player away but in the shadows)
Throa Wartooth toughest girl for miles
and Thora the Red her sister been learning the secrets of Freya

Early in the morning Breidr and the farmers are already up when a boy runs from the hill blocking view to the river crying out in panic. Then fell. Eagle eye Breidr saw a arrow in his back. A horn sounded. Throa was first ready and ran for boy dragging his to healers and saving him. She saw over a hundred viking raiders and 3 ships on the river.

The Jarl and his houskarls formed a defencive line and yelled to the Stonedale youths to let the cattle loose into the forest. Women and children fled with as many animals as possible. They ran for the barn to see a  four vikings already nearby. Three were slightly better armed than the party and the leader was wearing ringmail all over. Thora began shooting arrows while the rest charged, Breidr and the enemy leader hurling axes. Having learned the best battles are unfair, all struck the same poor warrior and knocked him back with several bad cuts. Thorhaddr was hit in the head and fell, Thora went to heal him. Lines clasheshed and as Stonedale vikings faster managed to wound several who fled. Throa who has made her own mace knocked a viking down. The leader who was cut a few times fled after his men as reinforcements came to the Stonedales. Thes saw the youths win and told them to flee. Throa smashed the spine of the viking she downed while others saved the cows. Thora shot at those fleeing and Breidr chased them until he could see enemy vikings coming.  The youths fled and Throa took a spear.

In the hills The Jarl planned retaliation while vikings licked their woulds. Stonedale's offered to attack the vikings boats as only ten guarded while other seventy were feasting in the Jarl's house. The Stonedale's surprised the raiders while eating and Throa heroicly threw a spear into a man's eye socket, shocking his peers. Stonedale's hit hard and fast injuring more unready vikings then fleeing when they rallied and formed a line. 40 vikings from the house came running to their boats then the Jarl and twenty of his men hit and killed many left in his hall. Numbers against them the Jarl's side retreated but killed over a dozen raiders who fled in the morning. Pleased the Jarl let Stonedales keep armour and weapons and invited them back to his stead to try out for crew of a ship next spring.

So seasons passed and Stonedales now in full armour with proper swords came to Jarl's hall in the Red Fjiord. Each youth passed tests and all went to feast the night before the feast. All went well till a disgrultled man not selected said boats name was bad and vain and cursed them all. Hrodar a beserk lept over the table and went at man. Some stondale's lept up seeling to impress the beserk. Briedr tried to punch him, Alrek tried to trip him and Throa tried blocking him. They failed but Hrodar caught the man, began throttling him and dashed his brains out.

Soured the feast and people headed home. The Stonedale's who helped in killing told legal repercussions would await them next Thing. Protested innocence but clearly they were involved. Morning they set sale with 40 crew and discovered rowing all day is not much fun.

Headed for coast of Britain and saw a Frank trader. The ship lapp wizard called for calm air, so vikings could catch them. Enemy outnumbered to captain put Stonedales up front with Hrodr a a test. Alric and Breidr lept to ship and attacked. Hroder hit middle of their shield wall killing a man swingining his axe over the barrier. Thorhaddr and Throa were not so luck and were pushed back. A beserk ran over her while she was down and the Franks fell quickly. They had silver and trade goods and survivors were enslaved and dead tossed in sea.

Weeks went by with cautious captain getting criticism. Small villages attacked but dissent grew with days. Stonedale's were loyal to oath and some tried to be nuetral. Then a black viking ship of captains rival seen. All moody as oathbreaking outlaws were superior in armour and experience but all prepared for the fight. Ships clashed and walls of men hit, this time well armoured men battled and struggled. Heroes managed to help even the odds but most of ships weaker youth died. Storm began to brew and Alrek was struck in leg. He crawled back while Briedr defended him. He then pushed to core of fight but was hit in sword arm and also pulled back. Gale winds snapped both masts and ships parted. Vikings jumped back to boats, both captains fought and fell overboard wrestling to their dooms. Storm tossed the crew depleted boat and men fumbled in the dark administering first air and controlling the ship. Briedr took the rudder and Hrodr nodded to him acknowledging him.

Over next days ship passed boggy coastline of Pictland looking for trees for a new mast. Saw a fortified village with a log palisade wall indicating trees inland. Old captain was too cautious but new one up for risk.  Alrek still limping and wary of coming fight.

Next - raid on the village

Thanks to RQ3 Vikings box set
Party learning RQ basics like running and outnumbering foes if possible.
Will have own ship and a touch of Horror soon....
Happy with my PC sheet, will use for my version of BRP games
a mashup of RQ3, Mythic Iceland and Ringworld 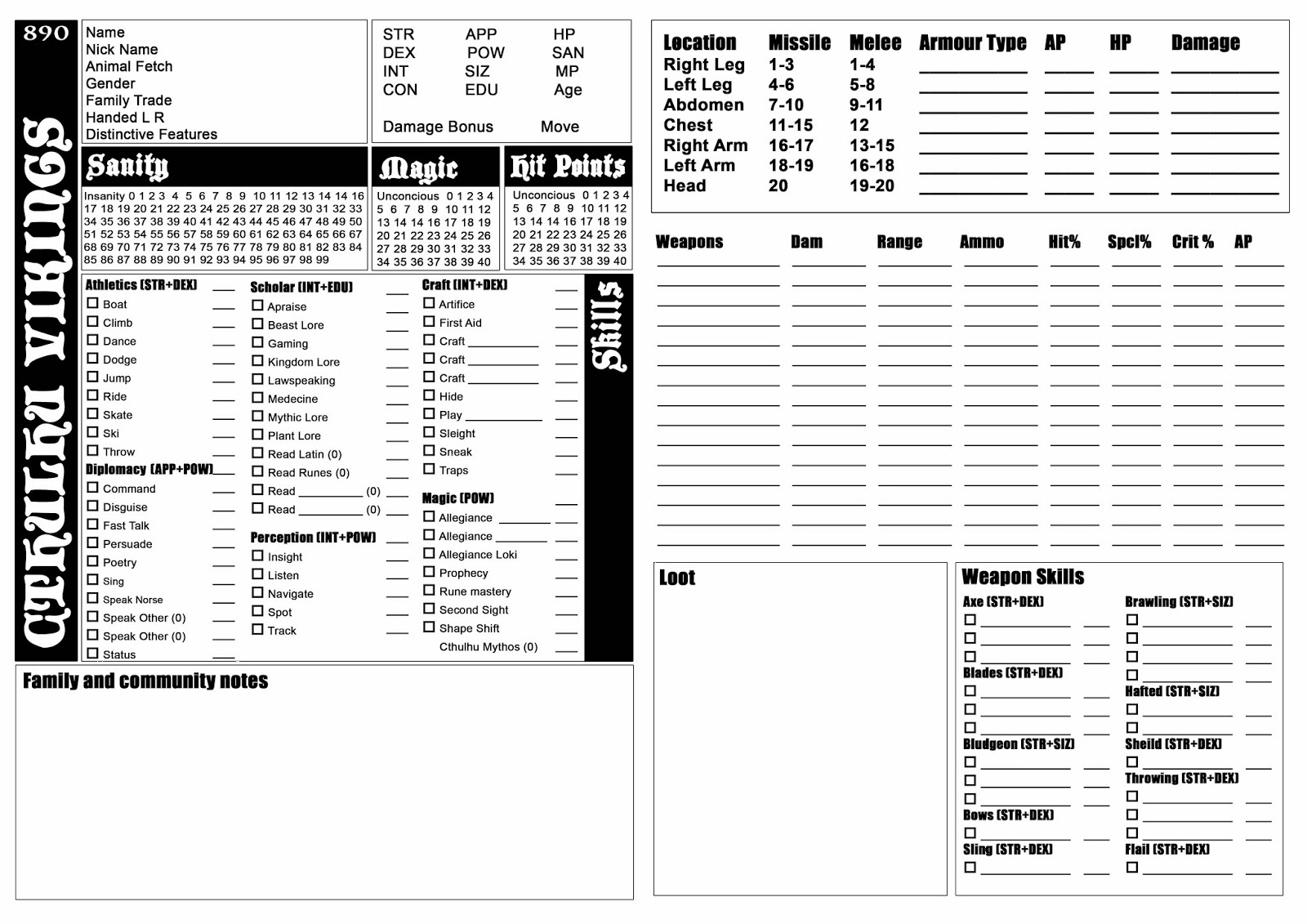 Posted by Konsumterra at Sunday, February 23, 2014