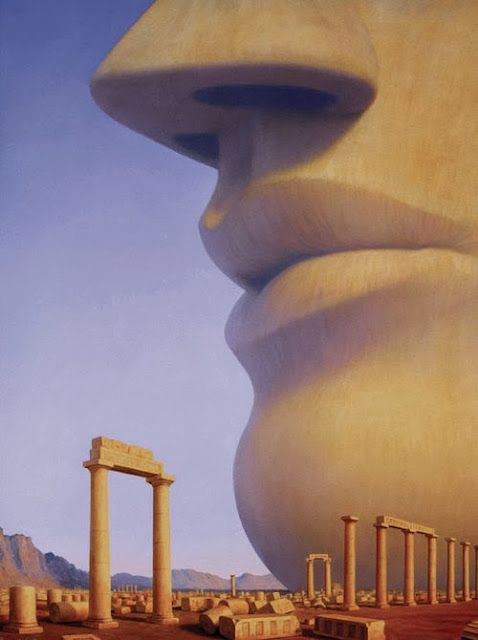 Halloween on way home and I was tempted to go out but went to doctors who said i was doing good and could give blood again. Came home and tidied up club for late session. Gamers arrived.

Last time the god Colossus had sent party to Karthang, a dark, cold yellow jungle being over taken by macrobes. The green men of the citadel were aloof but accepted the party green skin druid as close to their kin. He was also a spell user which are the only ones who voted.

Asked about the land and heard of evil indigo cat- men, the blue wizard and the warrior school. Also realized the men of Karthang were only skirmishers who believed insults and a near miss missile attack was a battle. Apparently cat men ruins and several ancient ship graveyards were in the hex also. Lotsa stuff to check out so the gang set off to ask local experts. Met a cat man and the druid with his rainbow robes persuaded the cat man to talk. The morlock offered him delicious goblin fingers. His people revered the druids of Psychon and he and his people would welcome him and his followers (being the other party members). He told them of the ruin and the great river and gave his tips to cross it. Look out for man eating fish. While the river carries macrobe spores elsewhere, the fish eat most of the big ones.

So onto the brotherhood of Xall, a school of warriors and monks. They welcomed the party and Xall spoke to the druid while the morlock and hawkman talked to the warriors. The Morlock paid to have 3 goblins battle him in a pit fight (1gp each) and spectacularly killed them and earned warriors respect. Discovered local goblins had delicious fruity pudding flavour. Whole party now like to taste everything they kill and now discuss what creatures should be best combo meals. Damn my random flavour tables turning party into cannibals. Druid damned those ancients and gods for making people yummy.  Hawkman and Morlock discovered the great warrior secret was to charge enemy, get into melee and kill them. A strange tactic the citadel men were unaware of. Learned of the drug addled sorcerer and of the ruins and ship graveyards. Also more about yellow goblins and blue ogres with single horns . Even though green men hated cat men they believed killing them was murder and goblins and ogres were fare game though.

Moved onto the wizard tower, a tall blue spire on a bluff that gave a good view of adjacent areas. Apprentices let druid in but insisted the others stay outside. An apprentice tried to talk the warriors into learning wizardry but snubbed the hawk-man who was illiterate. Inside the druid met a fabulous illusion of the blue wizard and requested they meet in flesh. As druid suspected the wizard shared the theory that the people here must unite against the invading macrobe ecology. Studied books overnight warning of local dangers.

Set off in morning to borderlands of macrobes and 3 blue ogres attacked. Naked bloated gibbering insane creatures with giant ivory horns. Managed to badly injure them all and they tried to flee and party chased them down. Morlock discovered they had delicious sweet honey like fat and he collected lots of fingers and blubber. Goblins with javelins attacked later on edge of macrobe jungle, All killed and hawkman was growing fonder of scarlet goblin pet who dished out lots of damage.  Macrobes grew in spheres stacked on top swaying as if in breeze. Most only fist sized but bigger ones size of beach balls visible. mounds of bubbling slimy growths and patches of irory flagellum squirmed under the stars. Saw some sailor zombies from ship wrecks and ran away.

Into depths of macrobe zone they saw huge scaled balls. Druid noted they were following plant colour of hex but a bit darker. Cast some divination spells to read land to find it was screaming from alien macrobes. Later a number of spheres detached from chains of spheres and attacked. Druid got one clinging to him with ivory roots. Morlock, hawkman, the druids wolf and hawkmans scarlet goblin killed. All injured and spore covered. Druid killed his and scraped off the roots growing into him. Druid spied a growing eye on a slimy growth that was attacking party unsuccessfully with hold person attacks by mental force and directing macrobes in the battle. Morlock splattered it when druid pointed it out. On death they burst sporing all nearby.

Druid cured morlock who had swallowed some spores. Remove disease spells made morlock vomit up poison. Came across sailor zombies and killed them all. Mildly glowing green, radioactive and curse magic radiated from corpses. In ship graveyard ignored civilian boats went for military.
Hawkman climbed on deck and battled 4 zombies. Druid adopted his 30ft giant form and morlock used druid as a ladder and jumped off to help the hawkman. Hawk had killed all four by time rest arrived. Decided to check out bridge and found zombies and a wight captain. Zombies went down before realized the captain was wight. He killed and turned crimson goblin to into a lesser wight. Morlock and Hawkman lost a level (one asked do i get a save? LOL). Of course weapons didnt work on beast. Hawkman had spear blessed by druid and morlock used his magic dagger. Druid threw burning pine cones. Unimpressed at being 5th level and goblin death.  Spoke to a demon cursed wight over radio on another ship. At war with living and life and was gonna skullfuck party and make them his eternal slaves.

Went below to find loot. Killed undead seagull swarm and met wight bard with a magic bone guitar. Talked briefly then killed him. Party fled back to green citadel. Guitar stops lich cold and fear powers working in 2 radius or if played by lich spread his power to area effect from touch powers.

After session I was cleaning up and heard doorbell (now 2am) while cooking a sausage. One of my female flatmates had been chased around suburb by arseholes in a pickup ruck and was in hysterics. Ive had this happen to me over a dozen times in my old city. Occasionally i get followed when i have a walking stick. Aparently someone helped her but after guys found her later and chased her again. Lets make Halloween suck for everyone jerks. I bet they thought halloween was a great night to be such scumbags. Hope nobody has to suffer this shit. My sausage was half burned too.
Posted by Konsumterra at Thursday, October 31, 2013