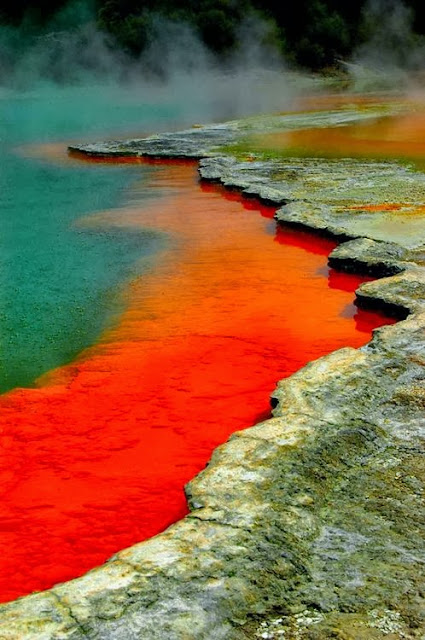 So the Druid, the Hawkman and the Morlock spoke to witches in the goblin market who recommended they speak to Colossus the god of Law. Hawkman sold his comatose goblin side kick to depraved merchant and bought a new one. Druid bought baby goblins for his wolf. Morlock boaght some Eloi drugs to keep his pet from awakening and casting spells.

They planned a trip though the woods a the druid would make this easy. While travelling a safe furrow through the woods the Druid saw a land feature was looking at them and licking its lips. A giant lizard like one of those 70s Irwin Allen movies covered in trees and bushes was looking at them. They bolted through the tightest woods they could and the lizard chased them. Woods slowed the purple lizard but Morlock could barley keep up (at least he didn't have to run bent over). So the Druid cast speak to beast and tried to parley by creating a mountain of food. The big fella chilled out and while eating told them of horned man who shoots fire at thee lizard and bad men making mutants in the woods. So they rode the lizard into a clearing where a minotaur with a flamer and gas mask lay down a wall of flame with his WW2 style flamer.

Druid cast resist flame on lizard and it charged through fire with party who all opened fire on minotaur. Morlock flintlock pistol, Hawkman and druid spears and lizard bites finished the brute before he got a second chance. found a hazmat fire station under a bunker where contaminated corpses of fire men and soldiers animated as zombies attacked. Looted the place, sealed pollutants and cured the goblin hit by zombie spores. Found a disposable laser, crowbars, a advanced +1 dagger and a advanced hazmat suit.

Saw cultist carry mutant in cage to hillside bunker which was serviced by the hazmat fire station and moved on to temple. Handed over weapons and talked to priests about Typhon cult. Priests healed them and ave them printouts of Colossus's suggested dayplan including exercise, diet and toilet breaks. All agreed to stop Typhon cult and hoped to investigate the possible contamination risk if Colossus lasered it from orbit. Gave party a flintlock, stun gun and shrinking pills.

Party came back with three acolytes and pounced on guards. Got inside and ambushed sleeping guards. Threatened one and Morlock discovered these scarlet men tasted like caramel candy. Down elevator found huge military warehouse contaminated as fuck. Tried to sneak around walkway and were noisy on metal steps. Musket wielding cultists released a mutant and fired a volley. Druid leaped of and transformed into orange-green-purple furred giant quadraped ape and smushed one. Hawk slid down punk kong while morlock got the mutant. Party headed to office who prepared to defend.

Threw molitovs forcing cultists away from windows but Hawkman dropped one on his feet and swore off using foerver. Morlock burst in and got hold person cast on him. Hawkman blocked by burning oil and paralyzed morlock and threw javelins through window. Priest healed himself and cast fear on hawk who fled. Punk Kong threw giant rat inside who got bayoneted. Morlock took some hits while frozen. Kong moved morlock to safety and mushed some guards and priest trying to escape. Hawk saw more men fleeing to only elevator exit. Party chased them down till all dead. Went upstairs, ruined elevator mechanism and threw molotovs down shaft starting a grease fire.