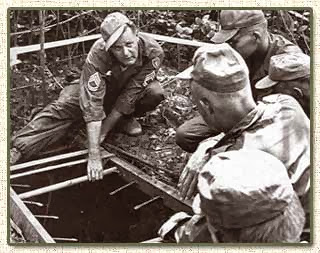 When I was writing my redbrick dungeon zone book - I did some traps for this kobold filled hellpit but recently i found this article on VC traps and thought re investigating. I played in a game or Palladium's Recon once and was killed by my peers when I destroyed a village with rockets because I saw one tunnel - doh! One rpg death I deserved.

Anyway for a fantasy or post apocalypse game here are some traps:

If kobolds in your area local villagers probably will be more competent at trap lore - to counter kobolds and trap them. A specialized expert kobold hunter might be possible.

Animals like food for bait, treasure or body of ally work well for human.

Messy dungeons or outdoors are easier to hide traps in so better get rid of those gelatinous cubes. Water flooded area great way to hide a trip line also. Anything with spikes could have poison or infectious substances so a CON save in order.

Trap users often have secret marks which a counter trap specialist might learn but these could be faked or change from group to group of trappers. Part of trap lore is spotting and identifying trap markers.

Side closing foot trap - some of these have been found across europe from ancient times. Can be built to target victims of a certain size so a kobold could build to trap humans but would release a kobold or wouldnt work on huge creature. When stepped on foot falls through and side grab and lock target. For extra mayhem try poison spikes. An intelligent victim could get out with some effort so spikes a good option vs humans. While spikes only about a d4 or d6 , being locked while under attack not very nice.

Spiked see saw - when foot steps on panel it drops and a other side of spiked board hidden, pops up and stabs you in the face with spikes. 1d6 plus possibly poison or infection.

Side closing pit trap - when you fall in concealed pit spiked sides close in and trap you get stabbed from both sides while dangling in pit with possibly more spikes in bottom or snakes or something horrible. 1d8 or 2d6 damage.

Mace trap - large heavy piked log or drum wings down on whole party if trip wire set off. 1d8 or 2d6 or worse depending on object. Everyone in line needs to save or be hit. Does need room to work.

Deadfall trap - trip wire activated spiked board or simply rubble. Can be built various sizes and can even collapse whole tunnel on party. Typicaly 1d8 or 2d6 but 4d6 or worse possible.

Whip trap - when line tripped a bendy branch or bamboo pole flexed and tied is released striking the victim with spikes on end 1d6 or 1d8.

Barbed pit trap - can be small for a foot of big enough to fall into. Spiked metal hooked barble overlap all the way down injuring victim and making removal dificult without sustaining more damage. Several helpers could release victim given time. 1d6 for a small one, 3d4 for a large one. A panicked victim must save to escape and takes more damage every attempt. Takes at least 10 minutes per attempt for helpers to remove victim.

Animal traps - often hidden or with bait need a STR roll to open trap mechanism which most animals cant do. Often tied or chained up. Given STR save is for person in the trap, easier for person out side or if using a lever to open than for victim. Fox or rabbit trap 1d4 STR save to open. Wolf trap 1d6 STR save -4 to open. Bear trap 1d8 STR save -8 to open. If trapped and remain still trap damages 1pt per hour. If victim panics and moves or fails to escape with STR save get 1pt damage

Posted by Konsumterra at Tuesday, October 22, 2013