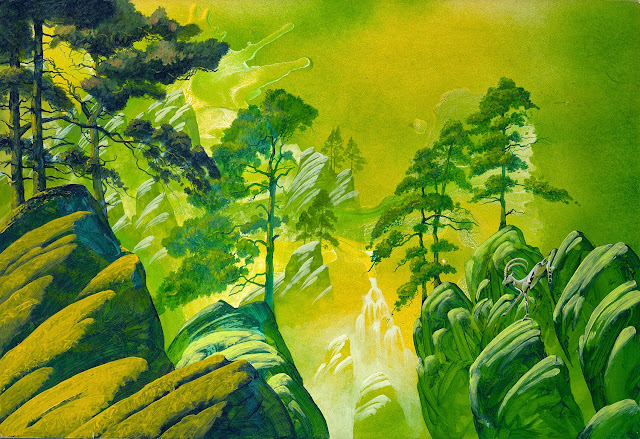 So have had several short sessions of Planet Psychon and some interesting characters created.

Conan generated Moritasgus a emarald skinned punk haired druid wearing living plant mail coat and expert with the spear. Moth antenna, 4 didgits in limbs and was raised by serpent men who grew him in a lab before escaping. Skilled in druidy things, making fetishes and blocking arrows. Has a pet wolf 9 foot long, crimson hair, webbed toes and a unicorn horn. Has nuetralize disease gum too.

Steve playing a Rigg, a Morlock with tangerine skin, no hair, 4 didgits and horns. Was raised in underground hell of Wallmar, an ancient warehouse bargain mart. Was driven out when discovered the managers were a corrupt priesthood. Has firearms skills and a flintlock pistol and is conversant in energy weapon theory, machines and traps. Has a pet Eldren food beast and likes to eat raw uncooked kills. Ha a disposable laser, some gems and wears a hero harness and greaves. Has water breathing pills.

Andz Playing Filgree, a falcon beast man with steel grey feathers and a stinging insect tail. Spear master with additional critical chances. Also javelin user and able to enter a battle frenzy. An able survivor, tracker and very alert. Raised on a flying citadel that raided various hexes but he was abandoned on a raid and is now lost. Has a scarlet tween goblin valet. Has a water breathing pill.

Rod playing Swiliar a Eldren with sorcerous majik, with cyan skin, long lime green hair only 4'6. Forked toungue, cat eyes and spectacular genitalia. Has many animal languages and is ver alert. His family terraformed while he was absent an\d dont know who is so he has left looking for a new home. Has a smartphone and some magic strength boosting weed and a pipe.

Polli ha a rogue with green and yellow spotted skin, seven digits, two smaller arms and a long toungue. A classic thieving cowardly bastard with two weapon fighting. Raised by mutants in the wasteland before joining a citadel gang.


Matt has Targer a Eldren sorcerer raisd by high altitude air nomad clan who follow AI named ASLAN. All Eldren of his clan have orange skin, leonine mane, a tail and pointy teeth. Has no combat skills as their god edited out all the violence from their monitor scans of the surface world. . Has holy water, a jewel that enhances saves and plays the Harp.

Ive been running them in the nicest hex i generated: Goldfang Gulch. Scarlet goblins enslave green kobolds and keep cyan trolls in stocks as food. The scarlet citadel houses a goblin market. Goblin warrior knights and witches rule and the are pretty happy bunch. They do worship the old ones but only so they dont get eaten. Treasure of the old ones and ancient empires are found laying about here attracting adventurers. What they dont tell you is mimics and shoggoths abound. Giant green cyclopses, cyan trolls, mi-go, gnop-keh and lions are found also. Goblin hunters are friendly but goblin knights keep demanding one on one combat. Witches are healers but also looking for sacrifices and offering food and treasure to young men to draw them near.

Party met in goblin mart and a witch for cash told them a god sent them here to prepare them for destiny. Party cross crystal desert under a yellow sky till reached lapis megalith plain. Attacked by a magenta shoggoth and cooked and ate some of it. Characters also at this point rolled blood colour and what they taste like. Swiliar the Eldren tasted like old sweat so the Morlock lost interest in eating him.  Captured a troll too. In shoggoth lair was 3 crystal lids over wells, one open.  Inside was a green stone with green cthonic text about fish men. Two shoggoths attacked and party killed them then used stone to summon a fish man. Druid spoke fish to creature who was obligated through treaty to serve one day a month. Two more summoning stone found. Found another vault and killed 3 more shoggoths and got some more stuff. Mostly gems and fish man gold but Swilar found a arm band (a tentacle ring for big creature). Tried concentrating on Filgre the hawkmans sidekick who fell into a coma. Swilar could her goblins thoughts inside his mind.

"Hello I cant see, where are my legs. hello?"

"when does it wear off?"

Good to be using my months of bonkers sandbox prep at last.