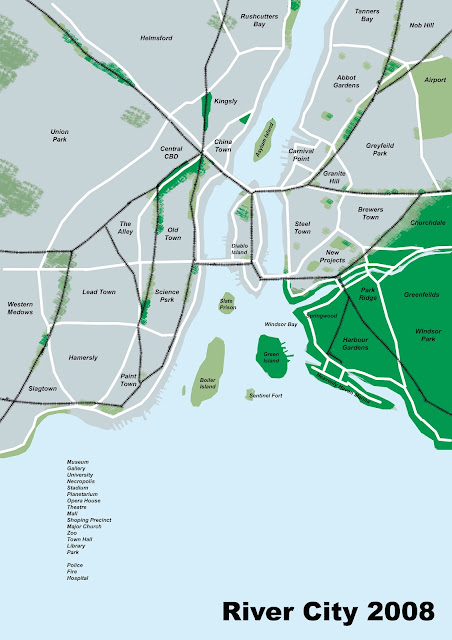 After my Adelaide based Marvel game which lasted 20 years i started using river city - between Adelaide and Melbourne. I assumed all the swamps were never drained and a horrible city of industrial hell and poverty on the sight was built in the 1870s. The greener the richer areas while the grey are poor and mostly paved over. Diablo Island was out of control zone most people only drove or trained through. Evil companies dumped waste freely and mutant gangs emerged. I have some lists of evil companies and gangs ill drop here and some more detailed maps and some characters.

The islands were fun - meeting grounds for gangs, buried military bunkers, mental hospitals, prisons and other places for trouble. Also in this setting I allowed magic and other origins when previously all meta-humans were one of several strains bred by aliens.

I might arrange a game for xmas when i go to the old country to hang with my old gamer pals. The area is a territory not a state like Canberra. Its in the area of South Australia only a hop from th mysterious former volcanic blue lake and Maralinga - the sight of a dozen or so Nuclear tests and a rocket range.

Some heroes from this era:

Terra - a four armed super strong burrowing gangster who had his own street gang and did his best to never leave it.

Hairy Bird - A spoiled rich girl who could sprout super hair all over and attended local hero high scool. She also rode a bicycle about.

Mercury - A Greek chemical engineer who believed he was the son of Zeus - chrome skin and telekinesis. Foolishly trusted people in his secret base.

Occulon - a scarified cyborg eye surgeon who could fly, shoot lasers and more. He was actually blind without his powers so he stole a villains eyes when the state asked him to remove the alien eyes from the villain. Little did he know he was broadcasting his adventures to an alien civilization. As a human he would spend an hour putting on his makeup - as a hero he was hideous under his mask.

Sprout - Could turn into a tree man and grow 50T of wood every combat round. Spread mariuana around the city and accidentally tortured  a villain to death and stole villains loot. Didn't really get the Karma system of MARVEL FASECRIP (I added Charisma stat and used as base for popularity score).

Some of my other characters were Illustrated by Michal and i will post them sometime. The older game was probably grittier.

While I like RQ and superworld, Marvel like DnD has very little paperwork for a GM except NPCs which take only a few minutes and can be re-used for years.

I have notes on a Cthulhu superpower game too i will dig out soon too.

Posted by Konsumterra at Wednesday, October 03, 2012