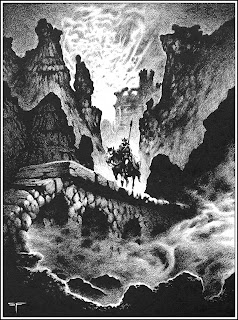 Heroes met as adventurous youths. They spent years looting ruins and monster slaying. They were employed by the Takarsian Duke to  hunt chaos. They explored Elderwood, voyaged to Into the Underworld and killed the Vampires of Castle Skyford. Stole Dragons eggs and ate them rather than loose them in a  river accident with a serpent. Gained power, settled down and married. Explored the Rowanac Pyramid of the  Elderswamp. Forty years later returned to world. Salimar left to hunt the Hell Fleet. Others reclaimed the lost lands and traveled to the mysterious otherworlds. St Clubfoot and Gnashtgraal killed the demon of Iron mountain. Many left towns and kin behind. Many others were finally lost in the Otherworld.

The heroes meet down and out and luckily gain employ from the king of Takarsia under Hunderbrecht the kings man, as messengers. On the way they were attacked by assassins and healed by villagers. They asked but a favor; kill the Great Worm within one year and a day. They traveled widely through the land and even met the Great Dakarian Horse Khan and his horde. Met Earth-Dragons Clan who as alway attracted trouble and opportunities. Back home the Master died. Knighted by King Mantifex to call the Council of Kingdoms. Battle the Worm and satisfied their dept. Meet Queen Hypolat who tells of pasts and destiny. Spent months training. Competed in the Games of Igendar. Then explored Hellwood Forrest and found the lost ruins of Skyfrost Keep still partly cursed.  Sir Darion killed the Demon of Skyfrost Keep, returning it to the rightful heir.

Elsewhere after wintering with a housecarl, other traveling youths who had been stranded by snow, hunted a “Trollbeast” who killed clansfolk. They followed its trail to the City of Stone, which had thawed from a glacier. They set an evil spirit free to ruin the world there. An old Dwarf Lord tells them of their responsibility. Explored the holy caves of the Earth Age, the well of souls before returning to the city. The spirit now embodied recovers evil artifacts from the past. He makes allies with monsters and sends them against the heroes. Driven to a city they consulted the Moon Oracle. They returned the next year and slew him in his lair. They were rewarded with magical fungi from the dark elves. With these they seized power from the other side.

Then they joined kings men to being knighted and bequeathed land. They helped negotiate peace with Nomad hordes and agreed to settle them. Food supplies were sabotaged and stolen, sending the nomads on the warpath. Many bitter nomads survived and remembered the treachery and vowed revenge. Alas those which survived the journey would take many years to recover. The Entaranian Empire, believing the Barrier lands weakened, attacked. The Heroes were quested to stop their Lamnutainian allies support, so they went through the lost mountain pass. They met a minor demon, giants, formarians, fatchans, volcano cults, and blocked the pass forever. Bison walker earned the hate of Bangarigor the god of corruption. Having blocked the pass they were stranded. After finding a city they rested. They battled a Lamnutain expedition and Gunuvar struck Sunheart Goldbrow dead with a lightning bolt he called from the god Ferris. They fled to a stronger but independent city (with heavy tax), and stayed for a time.

After traveling their separate ways they returned with many victories and new secrets. Sir Darion went to Kanos, slew a Minotaur, met the king and returned with distant kin. Wolf-Who Rides-Horses became a shaman and accumulated a tribe of wolf-folk primitives and nomads. Sir Garreth studied spells then flew home, the guest of satyrs, Oreads and other dwarves. Bisonwalker robbed and killed a great She troll and her guard, giving him a fortune in gold. All studied, married and rested.

Then they went north to aid Bisonwalker and Wolf-Who-Rides-Horses find their ancestral ground among the kingdoms of chaos. Bisonwalker was even challenged by a powerful giant formarian champion of Bangarigor. Both found their ancestors, Sir Darion was obligated by a Duncow who saved his ancestor to help them free the herds of the underworld. Gunuvar converted hundreds to Ferris worship then traveled home in the form of a lightning bolt with news of a chaos crusade and new converts. Gunuvar gained fame as the finder of the trade route through the red wastes.

On the return home to raise a crusade they battled evil ogres hidden as good farming folk. They penetrated their cavern sanctuary. In killing the clan ogre father and releasing undead into the fungi forest, they drove the cult of Karima the severed goddess into the wasteland. They easily slew the ogres son and made truce with their ogre ally to battle a mighty demonic fiend. The fiend near killed Earthdragon after one of it’s head was blasted to cinder by Gunavar. Finally they slew it. The ogre women and aged fled with treasure and called a pitfiend upon them. Then they traveled to Eldara, finding many treasures and possible friends among young adventurers from exotic lands.

They spent a year raising the crusade. Garreth Low returned to Ironforge and brought openhanded dwarven crafters, an alchemist, a wizard and a even a cannon. With these friends, they killed a dragon and many river serpents. Earth Dragon fort was under siege by The King of Marrus and a chaos horde of Bangarigor. Gunivar spread her faith around the lake, working towards being a Champion and saint hood. Gondo Holst, Grandpa, Mother and Jezra the Harlot led many ogres to kidnap, ransom and slay the heroes kin. The beast nomads used their terrible heroquest gained powers to spread their kind far. They called down the elder beasts to win their wars. Wolf-Who-Rides-Horses whelped a litter of a huge prehistoric breed of wolf long gone in this world. She rules the Hellwood forest and hunted the evil of Hellwood to Morvia.

Finaly prepared they led the crusade north, burning Morvia and the lands of chaos to ash. They re-established the ancient capitol of Eldros for Stormbisons empire.

Endnote
Well sounds like the end was happy - sounds alot more epic than my current potholing murder hobos. I also remembered we would all bring cats to our sessions. Lots of burmese were fun.

If I could just find those maps. Ill post the world here some time. I have lots of cities too which were big fun. Have lots of notes on gods too.

I ran 2 groups in my Ancient Babylon game for few years after this.

Gods
Most worshipers didn't formally acknowledge the elemental nnitarian system of classifying gods but they did detail the most important ones. Other minor gods existed but were considered unimportant bu the element scheme. Some of these gods were character in a previous games from 84-94 (earlier cycle of reality). A little reward for for being awesome players.

The EARTH Gods The gods of Earth, Growth and Nature
Preserve the Life Force!

The SOLAR Gods The gods of Fire, Light and Truth
Bring Order to the World!

The STORM Gods The Gods of Sky, Death and War
Destroy Your Enamies!

The LUNAR Gods The gods of Water, Magic and Mystery
Study The Mysteries!

I have more detail on this later