Monotheists in my RQ world 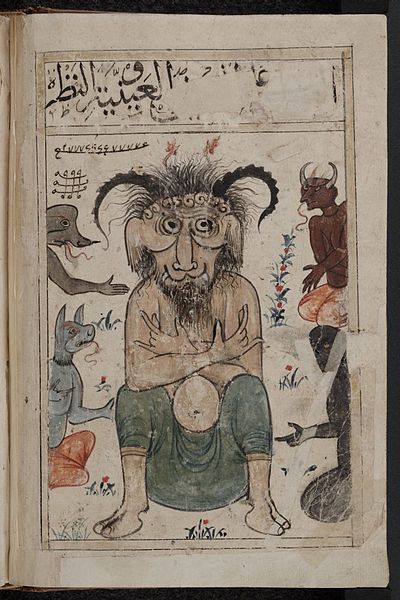 This was a 2000 year later version of my old rq games religions from my last post on the subject. Basically was an alternate dark age earth with a similar map but with obvious differences.

The Book of The Law
Books of the old Prophets (About 500 years before the supreme ones True Prophet) A legalistic text with lineage from the dawn of creation, the means of avoiding spiritual contamination, various histories concerning the old prophets, and their struggles in the shadow of ancient pagan empires.

The Nikeans claim true decent from these prophets and have their additional text of mystical doctrines The Alechem Magna. This includes numerology, alchemy, cosmology and methods of communicating with angels and the supreme one. Nikeans believe study of the scriptures and their hidden secrets offer the keys of the universe to the worthy and pure. Today Nikeans a mercantile and persecuted minority for their old ways.

The Book of the Nameless Prophet (year 0 After the Prophet). A book of new laws and moral codes combining the religion of the old prophets and ancient Agonian philosophy (natural philosophy, stoic ethics, Platonic theology). In his lifetime the Prophet spent fifty years traveling the world. In this period he battled demons, performed miracles, converted kings and spread his missionary zeal versus evil as influenced by Tarmaj dualists. There is an appendices in the gospels of the prophets followers which offer a variety of reinterpretations of the prophets words. Two major schools exist of this faith, Eastern and Western, with numerous heresies and minor schools. Both once belonged to the mighty Lamnutainian Empire which split into two empires in a civil war.

Western Church
The Western Empire collapsed after conversion from paganism but the church survived anyhow. The Hierophant rules from the holy city of Teshlun but his control has fluctuated. As the Reformers threaten the church, the Hierophant grows more brutal and extreme in response. The Western church has a major cult of thousands of saints incorporated and has become more extreme in the pursuit of heretics and evil.

Eastern Church
The Eastern Empire and church have remained one, the Emperor is the Earth’s representative of the Supreme Ones law. The holy city Tertizan is said to be the worlds greatest city. The Eastern church has a major cult of angel worship and prefers the use of scholarly debate and the benefits the eastern empires civilization to convert the heathen and heretics before turning to the sword.

Heretics
The current surviving sect of heretics most are struggling to survive mainstream oppression or have thrived in isolation.

The Reformers in the west believe in a  more individualistic interpretation of the Book of Law, except have an extremist streak of moral purity, and disapprove of the use of saints and angels. Each reformer sects is named after a founder who claims to have a new more pure insight to the Book of Law. Their wars in the west with the mainstream church have left Dutainia a war and plague torn hell hole. They have so threatened the Western church that it’s policy has been to react with more violence and established inquisitions and crusades against all heretics.

Thelkonism in the east teaches that all major creeds are just aspects of the one true faith. They study the holy books of all major faiths as well as the mysterious religions of the extreme far east. Their teachings include reincarnation and how to commune with your personal angel who may intercede on your behalf directly to the Supreme One. They are hated by all other faiths for their tolerance and rejection of any one dogma, but their mercantile ability has spread them far and wide, especially along trade routes to the far east.

The Lost churches come from isolated regions where they became separated from the main church shortly after the first missionaries arrived. Paganism and the true faith became intermingled so ancient art forms are still practiced but now in service to their new faith. Many pagan rituals and teachings still survive and their mystery teachings seek to unify the old and new faiths.

The Hetori are a school of mystical rebels mostly crushed in the west. Preaching love and tolerance, hundreds of sects offering their own unique means to becoming closer to the Supreme Being. Oddly enough all these sects place men and women as equal before the Supreme One. These sects have produced original works of art in many fields to hide their doctrines from the Western Church. Many aristocrats and city folk practice these sects in secret.

The Klaresti who believe in carnal sex and nudity express true love for God best. The Mosgani who preach true love for other humans is the truest form of worship. The Pertori who preach love between man and wife is the purest form of divine love. Kelsorgi who mortify themselves with self mutilation and revel in filth to show their detachment to flesh and the worlds base nature. Pelegosi who revel with the beasts and tried to restore themselves to the pre-corrupted form of man by abandoning civilization and returning to the woods. Malatori who practice sinning so as to release their evil urges from within. Bagarani who live below the earths surface so as to be closer to the primal clay from which man was made by sitting in holes or living in caves.

Rival Religions
The Maxalad is the chief holy text of the Infidel faith of Kalanism, who claim a more recent book and prophet of the supreme one. Sindar the warlord of Heaven united the southern tribes against the Western and Eastern Empire in a brilliant campaign said to have been inspired by the supreme one to liberate his chosen. Sindar had a new, martial philosophy as well as disdain for representations of animals, man or God. Sindar teaches that foreign subjects may live in their own fashion, but Kalanites must live a life of dicapline. Several major sects exist including the Assassins of Klarteroth, a school of scholars the Melphithon who study natural philosophy (as a means of understanding the creator),  and the mystical mad dancers of Al Akun.

The Aduna texts are the holy scriptures of the Tarmaj dualists who are the most ancient by far and preserve many ancient and far reaching art styles. Tarmaj the holy prophet predates all other prophets by at least a five hundred years. The Supreme one also has an evil opposite who seeks to destroy the universe with foul chaos. There extreme dualism and the struggle against evil has influenced all the other schools of monotheism, most recent being the Western church. The Aduna asks the student to make the supreme moral choice and dedicate ones existence the destruction of the cosmic lie of chaos. The text also teaches the importance of not defiling sacred earth or holy flame (such as cremation), and how to avoid spiritual contamination by avoiding certain actions.

Major sects include the conservative Tarmaj purists who deny the worship of the old devas, the more populist state church which tolerates and even elevates some devas to the status of aspects of  the Supreme One. The populist sect believe most moral evils are spiritual while the conservative believe physical and spiritual evil require constant vigilance. The heretical Markanism sect teaches that Law and Chaos are parts of a greater unity, which if comprehended can help the practitioners recognize and confront the more extreme causes of evil rather than it’s peripheral side effects.

Year of the Prophet 1116
Twenty wears ago the founders of Drachenford fled the Dutainian town of Morthuleheim to flee the war with the Western Church. The Church elders afraid of death at the hands of the Hierophants Butchers, sent our elders to convert pagans to preserve our enlightened  path. They found a village of pagans, defeated the chief, burned their wooden idols and chased away their wicked demon worshiping priests.

The war has grown worse and now the plague has ended most of our trade. Now Vikings are coming down the river, pagans are uprising, to town elders hope to recruit and convert more mercenaries.