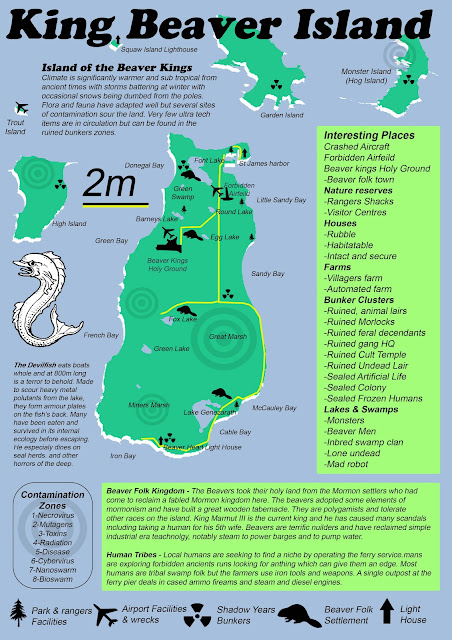 This is my new campaign local for next months Gamma world game. Ill start the party from one of the smaller island bunker enclaves. This way the characters can step into a new world and get used to crazy character types. So ill start them all as weak pre-GM era types which may need replacement during play. Heck the whole island could be on the starship warden yet. The party will exit a broken down bunker on the brink of madness looking for parts for a water purifier. They have been vat grown as expendables for one mission. Around them are other bunkers to start looting and a minimal amount of mutants to meet. Some morlocks, undead and a few giant frogs, and a few lake pirates and perhaps a beaver pirate or raider chieftain looking for relics to get them used to being under a beavers paw.

In the shadow years many built bunkers in isolated places and beaver island was developed by several factions. Each Bunker zone has 1d6 + 2 small bunkers and 1d3 large bunkers.  Cryonic vaults and DNA ark libraries also abound. Bunker areas are today roaming with animals, looters, undead and worse. Some bunkers are intact but many are mad and degenerate. Some have been replaced by animal or robot workers. Other have opened their doors and devolved into a gang or cult. Many feel intense rivalry for other bunkers.

After the Apocalypse a band of Mormons came to the island in a miraculous stroke of luck and reclaimed their lost kingdom. Three generations later beaver folk - a race of marine soldier sapper engineers came and rapidly took over. While beavers rule the main Island they are tolerant of humanity and its attempts to better themselves. Beaver warriors trade across the great lakes and act as pirates and vikings. They produce musk which keeps the great lake monster at bay. Beavers adopted many elements of Mormon life including polygamy. Beavers on land carry crossbows and muskets with royal elite guard using case ammo and water proof firearms.  They use rare delicious wood-chips as currency. Beaver lands are covered in pit traps, flooding dam traps, steak traps, log jams, falling tree and other traps.

Starting point is High island, where a desperate bunker populace need stuff from outside. The party are awoken in a shabby machine room turned into barracks. Through a window a Doctor explains they are a reclamation team contaminated and inflicted with memory loss. They are to reclaim goods while the bunker work on a cure. In reality they are decantered clones with damaged learning tape based education. Education includes basic bunker equipment familiarity, bunker patriotism and warm fuzzy memories of living as a creche child and being in love. An armored bio-hazzard suit wearing guard is the only direct contact they have. They will find other explorer remains pretty fast.

The group also have a map of the Heavenly Haven Bunker Estate showing 4 small bunkers and one large - where the explorers come from. If they succeed in finding the parts, the bunker will be surprised, feed them and shelter them then send them on more errands. The bunker have no intention of letting them back in. The party might attempt a forced entry.

Local tribes will adopt them, they'll also meet other explorers and see many tribes folk in bunker jumpsuit remains. Eventually the party will go to King Beaver Island then a mainland city. I'm tempted to put bits of first few gamma world modules on their starting island also.

Posted by Konsumterra at Thursday, October 11, 2012