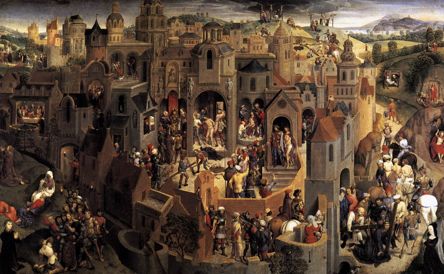 The city is always a highlight of many fantasy games. The urban megadungeon slum sprawl is always fun. The old thieves world pack from chaosium (and pavis and rubble paks), Lankmar and Waterdeep from TSR were always fun and had great maps. I always liked drawing cities and maps as a kid. Im looking in my study for a 6 inch stack of 80s gaming stuff with many city maps and world maps i hope to put here and revise. The best gamer city of all was Fighting Fantasy Pt Blacksand which has some kind of kickstarter happening with new maps now. An episode of adventure time set in a city of thieves was inspirational too.

My players have heeded the invisible sighs around the city that say "Ye below 4th level turn back now!" So Im expecting the next level up they will visit.

Skullport is the most horrible and unique city in the world. Pirates, whalers and slavers settles inhuman ruins from the elder age about 2000 years ago. In the Elder age it was a multiracial inhuman city of black magic and horror. It was also home to a Necromancer lord for hundreds of years after the Elder age. Sealed houses, mysterious sewers and towers without doors still fill the city.

The Baron who rules now has a sweet deal with the empire and all the pirates only attack the empires friends and allies and enemies. Exiles who come to escape the empire are actually monitored by the secret police of the Barron

Humans are about 70% the population with goblinoids, kobolds and orcs making another 25%. Final 5% is elves, dwarves, ogres and other minor races. Degenerate elder races (serpentmen, lizardmen, spiderwomen, batsfolk, mindflayers, frog men) are rumored in the sewers. The elder races hate humans and remember when man was a slave race.

The City walls are reasonably well maintained but most towers are sealed up. Much of the city is inhabited ruins. Disturbing seals is a crime and a license must be obtained to do so. Squatters can still find a room easily. Slums are pretty common despite the room as mutual defense. Occasionally interslum riots breaks out as gang led agitators lead mobs against each other. Occasionaly a tower seal is boken by some fool and adventurers are rounded up sent in.

Non humans are the rank and file of the army and town guard. Orc pirates are often temporary watch members. Secret police spy on and assassinate trouble makers.  Exotic shops and wizard wares can be found with forbidden goods elsewhere being displayed openly. Drug abuse is rife with the state monopolizing black opium (for the poor) and blue lotus (for the rich). Criminals are worked in mines, sewers, wall building, gladiator events, sold as slaves or sold to evil cults as sacrifices and meat. Prison is full of monster humanoids too. Dead and living criminals are hung in gibbets by gateways, put in stocks and their heads put on poles. Some get made into zombies for dirtiest jobs like galley rowers and salt mining or sewer work. Occasional a zombie sewer worker is found wearing clothes in fashion in prehuman times. Jobs in the sewer industry are always needing adventurers so the state sentence trouble makers to sewer cleaning.

Gladiators, pit fighters and backlane brawls are common but the most popular sport is the Barrons Games. Exotic adventurers are sent into the dungeon under the Barrons Palace to retrieve goods. The are watched by wizard eye and displayed to the masses by illusion spells in amphitheaters for the rich. The commoners see puppet show and performances after the fact. Gambling, corruption and thievery are out of control. The basic alignment is Lawful evil but other evil and neutrals are still common.

The districts are separated by walls with gates that are locked at night without a pass. The larger ruined district is least patrolled and least populated (at night things come from he ruins and sewers and cults and gangs use as cover to do their secret work. The six main slumbs, mariners, merchant guilds, rich and ruined are the main districts which may be sub divided as well. Outside the city the farmlands have far more decent and normal folk. The Barron has a death sentence for interfering in food production or harming a farmer or their livestock. Many are yeomen ex soldiers and quite tough. They are used to killing city scum who get in their way.

Piracy and slaves make up the economy - the whalers and sealers were moved to the other side of the island because of the odour. It was also a place the most violent rejects could be sent out of the city. Humans come from all the worlds lands here as traders, pirates or slaves. Temples to the known gods and even some unknown shrines to ancient demons and devils can be found. Some priests are charlatans earning a living by begging and even make fake healing potions). Magics forbidden in hundreds of lands is available here. The university has every school of magic and necromancers and demonic summoners are quite respectable. Grubby magic shops can be found under bridges, in back alleys and the ruins.

I'll do some encounter tales next and maybe find those maps.

Posted by Konsumterra at Thursday, October 25, 2012