One of my old RQ game worlds i found... 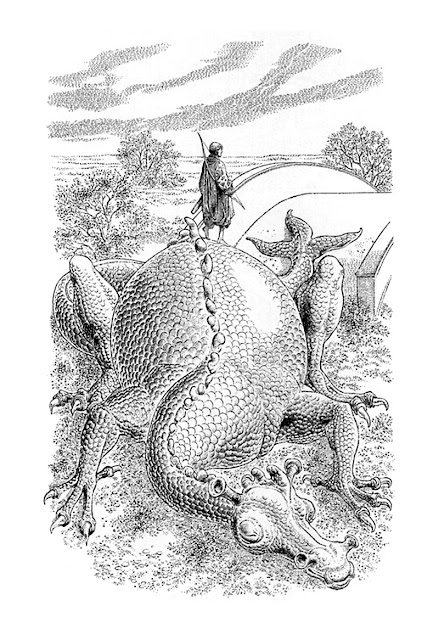 I was thinking of having a post apocalypse science fantasy DnD next so I may rework this. The funny things you find - i have a box of maps, character sheets and dot matrix docs from the 80s i did on my commodore computer so i may unearth some here

Part 1. The Dawn Age (0-1879 1st Age.)
One hundred Human tribes were brought to the war blasted surface of the world to repopulate it and to serve the gods. Many tribes wandered to the wildest places and lived on equal terms with nature and the wild spirits.  Some with their beast kin wandered the great plains, the haunted oceans and the mountain rift valleys never to settle down. Others built towns and even cities. Humans were pious and strong, thus they were the chosen servants of the gods.

The city builders arose on  the holy rivers of the far north. After many dynasties came and went, the most bloodthirsty kings of the cursed lands devised terrible means to enslave the world. They were the first Empire and all hated them for their plundering and blood thirsty ways. Then the Eldren came, a semi divine race in league with dragons who slew the monster empire god Ashari and cursed them forever more. But the Eldren and Dragons would not leave. They came not to liberate humanity but to Enslave it. Eventualy the Eldren and Dragons allies parted ways and the dragons retreated. Eldren who remained on this world fell to demon worship and sorcery, becoming the Rowanac. When the Rowanac began to Tax souls a rebellion exploded, ruining the Rowanac attempt to conjoin the six worlds and causing their magical island to sink beneath the waves forever.

Part 2. The Bright Age (1879 2nd Age.)
Among the civilized people remaining (including many Rowanac slave Races) heresy flourished and competed. Many saints and prophets arose and led their people to the wilderness to create new colonies or to be massacred by savages. One Prophet, Mexlor founded the Elemental Unitarian Church and invited other races to take part. During the great council of Takarsis meeting of 1879 the unity of Mexlors creed was torn and initiated a terrible war driving the splitters into ruin. Then Mexlor attempted to spread the worship of the dread gods to slay their enemies. Another faction objected and were also slaughtered in a great war. When Mexlor had decimated most of the west the Elder races returned and destroyed him and his capitol. Mexlor was denounced by the sorceror saints of the west as an agent of Khaos and so crusaders came to exterminate any survivors.

Barbarians were the main threat to civilization and most trade was by coastal peoples such as the Sea Kings. As the lords of light and Dragon Hordes of the east kept civilization on it’s toes, The machine people arose in the West to rival the sons of sorcererdom. Their mechanistic and atomic philosophy gave them an organizational edge over the fuedalists and earned them the hatred of all. Finally the gods flooded their lands and all nature rebelled against them. The second crusade burned all remaining strongholds. The Beastlords claimed the machine peoples crown and destroyed their strange alien science. Machine people were destroyed when there emperor was finally killed, and the beastlord worshiping nomads of the great frigid plains destroyed what remained.

Lamnutainia was the last empire of any note. It united by land and sea of the known world.It has shrunk but left its mark on many lands.

Part 3. Since The Sundering (3122 3rd Age.)
After a terrible series of earthquakes, monsters, god battles, volcanoes and floods, the survivors crept from their strongholds into a new wilderness. The elder races have returned en-mass to renew their ancient battles. The heroes of old have shrines, cults and communities to their name. From the walled lands of Earthdragon Hill, new heroes set about to explore their shattered world meeting the elder races, monsters, lost humans, demigods and more.

Sinister new forces are preparing to overwhelm all Kanos, but like all peoples they must first make new maps. Since the Sundering, the great  continents of old are gone, as are the maps which accompany them. New sailing ships have restored contact between the sundered lands.

Nations separated for millennium are now growing hostile. Each land has adopted a philosophy to survive the aeons alone. Now their neighbors follow incompatible creeds, and so war has become the means of correcting their blasphemous ways.

The ancient veils which separate worlds have been weakened by the calamity. There are five worlds in all frequently visited by mortals at present. Heretics travel them seeking allies, weapons and new magic.

1. Sauria Dominated by dragons, reptilians and other species except mammals
2. Cryptia Dominated by undead, ruins, magical constructs and ancient demonic entities
3. Feylund Dominated by Elder races such as elves, dwarves, trolls and many others
4. Beastlund Dominated by beastfolk tribes, animals and rugged wilderness
5. Primordia Dominated by men, giants, gods and remnants of inhuman civilizations

Basically its a world of genocide, bitter history and fragments of ancient civilization still to be found. A fine place to find ruins and enemies.
Posted by Konsumterra at Tuesday, October 16, 2012