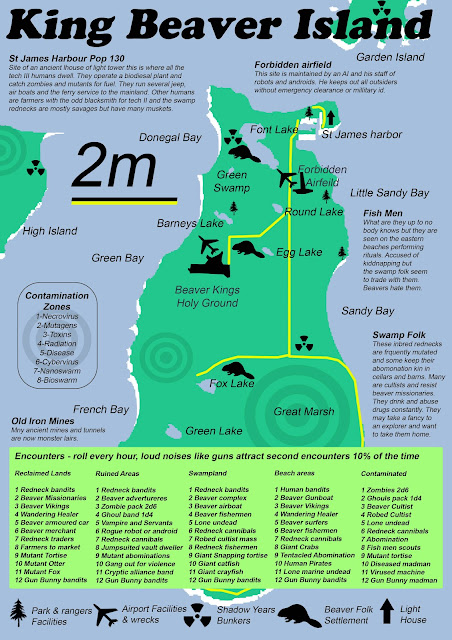 Bunker2 - dank and cold - breath fogs, stripped bare to metal, no sign of life or habitation, dim flickering lights. Mostly stocked with necrovirus contaminated undead, with a zombie lair, a ghoul lair and a vampire lair. They have been living off frozen humans for decades. The vampire has a medical android to revive victims and several ghoul hounds. Since the necrovore alien command on mars was killed they have been on standby for 200 years. Any captives might get frozen for later or infected to replace undead troops - vampires are utterly alien and hostile. Most of the bunker is stripped bare but power and medibay fine.
1 - 2d12 zombie giant rats
2 - 1d4 ghoul hounds
3 - 1d3 ghoul giant rat
4 - 2d6 zombies
5 - 1d4 ghouls
6 - medical android will treat wounds
7 - vampire lover - as ghoul
8 - vampire and 1d4 ghoul hounds
9 - ghouls with just de-thawed prisoner
10 - as above but infected with ghoul necrovirus
11 - black ooze - will infect with necrovirus - victim turns to ghoul on death
12 - cultists bringing meat for dead as sacrifice, hope to become undead

Bunker4 - Hellrazor Gang Fort, strewn with garbage, bones, graffiti and blood spatters, emergency lighting only (red). Gang has set up shop and is trying to revive frozen to sell as slaves, the failures are made into biodiesal or food. Also make molotovs and explosives and candles and drugs. Classic punk mutant cannibals with mutant members and a few heretic beavers.
1 - Cultist cell in robes with daggers sacrificing mutant puppy, high on drugs
2 - Bikers - with dirtbikes, chains, shotguns and bad attitudes looking fer kicks
3 - Mutant gangers with primitive weapons looking to get better weapons and slaves
4 - Mutant with abomination on leash hungry for food and sex
5 - Chimera absorbing another mutant, other mutants watching are turned on
6 - Gang Torturing and eating prisoners, too busy to care about party
7 - Slaves and captives too scared to leave - need force
8 - Mutant harlots offer a good time, pet abomination gimp, cheap
9 - Mutants having violent cannibalistic sex with chimera
10 - Gang cook with clever and chef hat chasing a swampie child and his pup stealing food
11 - Gang dogs led by feral gang child swarm party
12 - Gang beaver and mutant pal bet who can kill the most party members

The Big Bunker
Population 130 with 4000 frozen berths, all run down and decayed but functional. Population fearful, in decline and using clones to explore outside for parts. Have a few robots also. Several lost levals they might send party into.

High Island Tribe
Remnant non mormons mostly fishers and farmers. They retreat behind wall at night to avoid mutants, undead and morlocks. Population 90. Many are former bunker occupants who escaped or were sent on retrieval missions. They have been renewing the village pop for a hundred years or more. They trade with King Beaver and are considered under his protection. Any mormon may request king beavers aid. All the roads are his domain.

Local Morlocks
They are hungry to expand. They keep a small dome for their 30 eloi herd which is visible to outsiders. This lures in new breeding stock. Trouble makers get lobotomies or eaten. They have repaired some crude automatons and steam machines - all have steel weapons and clockwork rifles (take 3 rounds to crank).