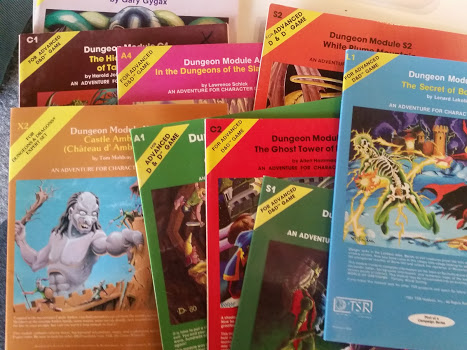 So i has been shopping lots

So for Quick look at the Oldschool modules
I had all these then swapped for comics around 1990 stupidly.
Actually I should have sold most of my comics early 90s.
Reprints now are so much better. Nice to see original artwork again

A1 Slave Pits of the Under City (POD) 24 Pages
Has lots of scan marks which could easily could be removed. Gloss is better than I thought vs original matte paper. Super railroad adventure but some nice rooms and traps. Liked the Aspis and Sundew monsters. 2.5 out of 5


A4 In the Dungeon of the Slave Lords 28 Pages
Having been killed in the previous railroad has various wierd cave encounters, followed by escape from a volcanic disaster and a chance to kill the slave lords who killed you. I wonder if anyone developed sunderhm as a setting? 2.5 out of 5

S1 Tomb of Horrors 12 Pages +20 Page Illustration Book
The classic meat grinder. Illustration book was great feature. My players lost all their treasure collected their career then accidentally wished it back using anti wish which ended badly. They one and lived but made a loss including items they had created over a years work. I played more recent version and got stuck alone with my poor kenku who escaped with a second party later. 3 out of 5

S2 White Plume Mountain 16 Pages
An interesting gonzo dungeon with a great map and some good art. The magic items are some of the best ever. The inside out ziggurat is pretty special and the stream flowing through air. I had old monochrome ed. The kelpie being a blant was terrible idea and i had my own faerie version that was more horsey. 3 out of 5

X2 Castle Amber (POD) 28 Pages
One of my favorites. Partly for it's links to Clark Ashton Smith (my first exposure), it's density of interesting content, great new monsters, some good art. Superior to box set version and big influence on the Glantri Gazeteer one of my favorite DnD books ever. I reacon blue Medusa would fit in well as a painting here. Inspired my own Ambergris Manour Dungeon Zone setting of mad magic manours. 4 out of 5

C1 Hidden Shrine of Tamoachan 32 Pages + 8 Page Illustration Book
One of my favourites ever. Bizzaro Aztec themes, the poison deathclock factor, some of the best art. First use of gibbering mouther, the poor mans shoggoth. Good mix of traps, exploration and monsters. I hope i get to run this again one day. 4 out of 5

C2 Ghost Tower of Inverness 20 Pages + 12 Page Booklet
Only one of these I never played before and dont feel much sentiment for. I like the hidden tower in the ruins and lots of the illustrations but it has lots of wasted space also. I guess it's a example of mad wizard gonzo building. Firebats appear in a full page write up which seems generous. I don't have any special sentiment to this but hope to run it one day. 3 out of 5

L1 The Secret of Bone Hill (POD) 28 Pages + Maps
A fairly dense, low level adventure with wilderness, a town and a ruined castle, the Barron's Castle which is quite detailed for somewhere you probably shouldn't be. Perhaps come up with a reason for using or this would be a case where awful murder hobo rampage might use more of this content. Could be a starting setting. The author was once outraged I was discussing toilets in dungeons on FB. I have run it but don't have any memories. 3 out of 5

WG4 The Forgotten Temple of Tharizdun 32 Pages + Extra screen of maps
I never really appreciated this or ran it before but recent blog posts have me curious to do so. The art was a bit of a turn off and I didn't appreciate some features of the module and would like to us with the lost Caverns of Tsojcanth campaign area in the future (my no1 oldschool adventure). Id like to run it now. Has lots of deception and I like a big battle with round by round reinforcements. I look forward to rereading in detail with the recent discussions on OSR blogs. 3 out of 5 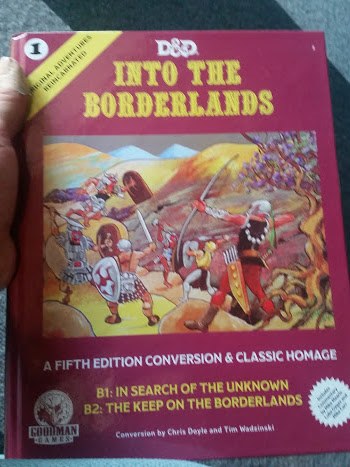 Into the Borderlands Book 384 Pages
Physically big impressive book. Thick paper which i don't mind with thin varnished paper colour pages in back. Some blue pages of old cyan maps. Caves of chaos map in front fol in the middle a bit awkward but this map appears several times. The Luke Gygax page is very close to the edge of the binding but they are biggest flaws i can see. This would have been $150 AUS dollars if I got from Goodman games. $86 from Games paradise in Sydney. I wanted it saw it. Backed off then got it anyway on my more recent visit to Sydney. I like the pic of the Gygax family in cult robes. The interviews are of minor interest to me but i will read once.

The reprinted stuff is solid though im not pouring over versions to compare petty differences. I swear the maps in B1 were designed to put you off mapping forever. Even copying it in front of me was painful when i played a bit with kids. B1-2 are both good weaner dungeons. I have fond memories of the caves of Chaos. Especially when a bugbear player went through a secret door to discover his long lost mum and dad! Had to kill dad but was big fun. I recommend lots of bookmarks if running from this book. Some discussion of differences might have been good to justify the printing of both.

New Content
Advice for DM not so handy as this is not a entry level book for noobs. Some aids and stuff on running factions would have been better. The soft grey new illustrations don't do much for me while generally DCC stuff is on point for OSR art. The dungeons and monsters seem clean, id like more filth. The font size is bigger and has serifs. Some of this stuff really is for newschool players. The revised Quasqueton map with numbers is good.

Additional encounters stuff is good and rounds out the the campaign area. The caves of chaos has added new wilderness encounters and newschooled some encounters. 136 pages on the 5th ed revisions and extra locations.

Overall it has readable new content and the good classic content. As a bridge between eras succeeds but Im not sure who wants that. Ive never had a problem changing stats on the fly. Id would like to run them. It doesn't feel like the final word on this stuff though which I think you might reasonably expect. Considering the fan content on some of the old modules available for free Id like to see future books do better.

Seeing the Isle of dread book announced gives me mixed feelings. I hope the expansions are better as there is only 2 versions of one book to reprint. I want to see it before I consider getting it.Hoping future volumes deal with multiple volumes. Id love to see a Saltmarsh book for example. The fan made expansions to the Lost City are amazing and Id like to see more stuff like this. 3 out of 5 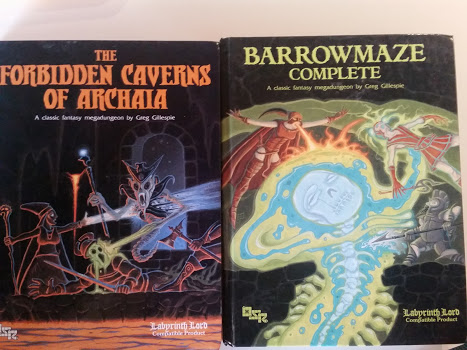 Greg Gillespie Stuff
While everything so far has entertainment and nerd collecting value the next 2 books are superior products in most respects in art, design, utility, brevity (lack of verbal diarrhea), ideas and value. Id rate them as some of the best OSR DnD things Ive got. Id keep these and my cyclopedia and ditch everything else if I had to. I give the 5 out of 5. Each has a year of play.

It is all well curated with art, design and layout.
There is no wasted space

Barrowmaze Complete 259 Pages
So the bulk of this book is the barrow area hexmap where the 66 smaller barrows and the barrowmaze are located. There is a central menace behind the barrows awakening the dead for a campaign climax. The mega dungeon is great but the little barrows could be recycled anywhere if your players don't use them.

The Forbidden Caverns of Archaia 293 Pages
This book features a canyon full of Petra like ruins with many dungeons and a climactic huge dungeon. The history of the area is interesting but easy to change. It has a good guide to monster gangs and hierarchies. There is a good encounter matrix which includes monster motivations. There is a over arching plot with a plot to release a evil god in the volcano climax. I found it easy to run the first dungeon with minimal prep on the village and the first dungeon. Descriptions are brief and easy to digest not the over blown boxes of old 1982 TSR. The book over 30 dungeons you could relocate in your own games before the final complex. There is a great time tracker good for any game too.
Posted by Konsumterra at Sunday, August 19, 2018