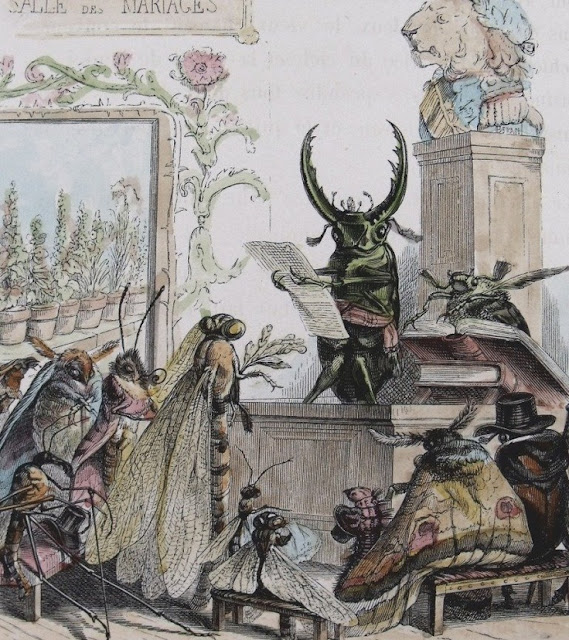 Partly inspired by French artist Grandville and Dr Bey's Bedside bug book and some other retro novelty art. Insect folk often gather or form small shanty towns on the fringes of human lands to trade. Sometimes they are on the borders with faerieland. Bug town is a interesting place to visit or recruit interesting henchmen or trade. Play a track of crickets or cicadas while in town.

d12 Bug Buildings
01 Tavern, where bugs meet to drink 2d6 inhabitants plus barkeeper
02 Inn, where travellers and merchants stay 2d6 inhabitants plus innkeeper family
03 Shop, where a insect family sell various supplies and trade
04 Nest, where eggs and grubs and larvae and nymphs are kept safe
05 House, where a family of bus live
06 Burrow, underground bug tunnel complex
07 Garden, where bugs grow plants and fungus for food
08 Stables, where slave bugs are kept as beast of burden and food
09 Storehouse, large hive structure where food is stored
10 Armoury, where bug sherriff runs the militia from and stores weapons
11 Wall, a defensive barrier of bug secretions, corpses and feces pelletts
12 Bandstand, where bug bands and entertainers perform


03 Phylis Snodgrass a posh lady lacewing, likes tea and being a snob