The Last Vikings: The Sacking of R'lyeh 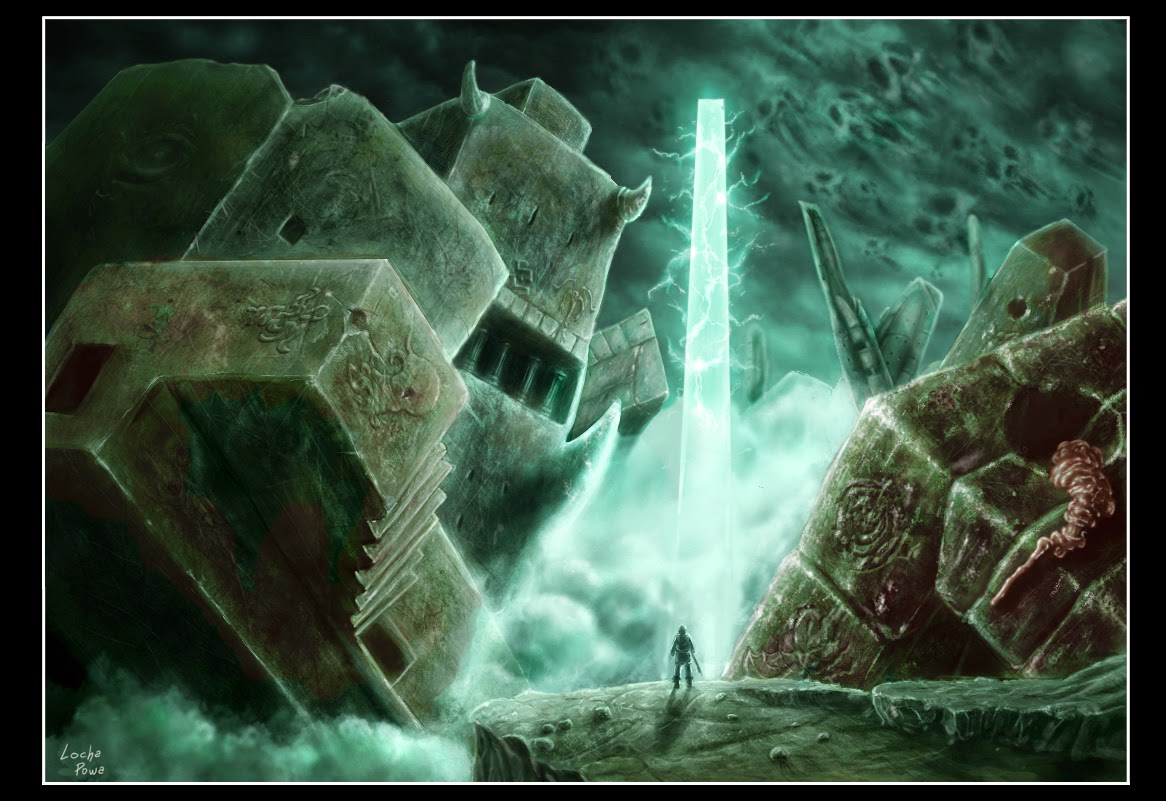 So vikings has bee lots of fun for 6 months. Started as dirt poor farmer teens ended up international dread runelord warlords throwing themselves at the shores of Rlyeh and utter madness. All had written wills.

Hrafn a werewolf runelord champion of Odin doomed to die soon
Alrec despaired at difficulty of pleasing gods has become a dread sorcerer
Briedr a farmer and champion of Thor
Thorhadr a former weak youth raised by rival clan now a famous Scald and Sorceror of Tsathogua
Thora a priestess of Freya, mother and merchant princes wife preparing to leave Midgard
Throa her sister a runemaster, blacksmith and mother famous fer her iron mace
Yvette widow of Johan now a champion of Njordr the sea god with her sealion servants

So after killing all European in north America and Greenland (a hundred years before they return) they sailed in their warship with three others, each ship with a fifty men and women. Sunk cultist ships converging on Cthulhu's dread city R'lyeh. Also known as the hall of the Jörmungandr serpent or castle of the leviathan depending on your gods.

Found a rock Island near Greenland with cult ships. Evil monks from Ireland, savage Pict's, evil Briton druids, Orkney fish cultists and many other depraved drooling cultists had gathered here to perform rites to keep Cthulhu awake despite the stars not being quite right. Band marched up hill as their men slaughtered the cultists guarding the ships and burned them.

The heroes battles cultists including evil vikings and killed them all with relish. Into the depths they went down a spiral staircase till they found green robed cultists at a great green monolith led by a cowled being in tattered robes. Slaughtered the cult but those who approached the leader saw it was in fact a crawling mass of worms in a mans shape that had somehow learnt to walk where it ought to crawl.

It hurled a sticky black glob from a tin bucket with a spatula which Thorhadr blocked with his shield, but Briedr was struck by one which ate some of his intellect before they destroyed it. Smashed the worms as best they could and one of the younger Stonedale's they brought along began to eat worms laughing.

The planted elder signs and destroyed everything they could and collapsed cave mouth. Found cultists with a great gold disc with alien sigils they cut into three parts. Saw R'lyeh rise in distance. Alien angles troubled them but they approached. Sure they had ruined great cult ritual they were determined to inflict as much suffering as possible on the old ones.

Saw a blue monolith atop the second tallest peak and marched for it while soldiers hunted and killed deep ones and cultists on the Island howling with glee to be with the lord of madness. While climbing the high hill one man slipped into an odd angle never to be sen again. Entered the blue monolith and battled a horrendous tentacled frog demon which their magic weapons harmed. Killed it but several increasingly shaken. Hrafn was looking for death and did not care.

The place elder signs in the altar and climbed the stairs. Knowing they had hurt the cult scheme they now saw Cthulhu's crypt open and the vikings began to snap. The awful visage sent some over the edge. Thorhadr drained of magic went inside and carved a gate in the wall and jumped in to Saturn as Eibon had thousands of years go. Breidr went mad and was a feral beast. His tatooed skin made him greater than many beasts they had killed and it took four others to kill him. Alrec summoned a Byakee which didn't help the band's sanity. Young Stonedale who had eaten worms was bashed and knocked off the building to break all his limbs and laugh in a broken heap below. Others went inside a the living mountain came at them. They placed the sacred star stones at the entrance on ground and on top of tower. Thora entered a trance and left to Elfland. She begged her sister Throa to join her but she would not abandon all her children. Cthulhu lumbered over them and Hrafn climbed to the top of the Tower. Throa's old husband, keen for a heroic death charged and struck cthulhu with a pole axe and the alien titan stomped at him. The brave old warrior who now had a son longed only for death managed to deflect the blow but his shield arm was torn off. He got up and swung again and Cthulhu crushed the man into a smear on the eldritch staircase. Others struck at cthulhu and even harmed the horror using the warded tower to retreat into if needed. Hrafn preyed to Odin, his head that of a wolf and all his Odin inspired fury he mustered and jumped at the god, cutting his shoulder. Cthulhu snatched him in his tentacles before he hit the ground. Hrafn threw an elder sign down the gods throat before him. As he fell into the horrendous god maw, he heard sound of raven wings and the spear of Odin burst through his chest. Odin whispered into his ear from behind.

"You were doomed to die but not in the belly of the serpent, you were always mine to take to my halls"

Hrafn's spirit was carried to Valhalla. The warrior smiled as his spirit hung limply, his blurred vision of the horror god below choking, writhing and vomiting up the star stone. Throa and Yvette the only vikings left ran and with star stones to ward off evil fled to the boats and where there men were killing cultists. Many men had grabbed gold but the Alrec on his Byakee star demon came and warned them to leave Cthulhu's treasure. Those who disobeyed were either killed by deep ones or turned into disgusting ruined messes of outre fungus.

The ship pulled back as the Island began to sink and the sleepy god, having spewed up the elder sign staggered back to his eternal slumber for another thousand years or so.

Ragnorak was averted for at least a while.

Throa did see her sister again who tried to take her to Elfland. The sisters embraced and cried but Throa wanted to see her many daughters and part dark elf son live. Even the one the loki cultist claimed was really his via the use of his supernatural disguise prowess granted him by his god.

Yvette and her new husband and her children to Johan and pet sealions went to the bright Islands of Njordr to live forever.

Alrec was distraught without his brother. They had quarreled and fought together and he felt incomplete. He returned to Thor worship and spent time carving a runic version of the Necronomicon as a warning to future he named the Jörmungandrsaga dedicated to his brother. He tried many foul means to find his brother and eventually flew away into the stars on his Byakee one night never to be seen since.

Next time I run vikings will be 910 AD and children of these heroes will be players. Only Throa will remain to advise them.

Planet Psychon for rest of month them Cthulhu Babylon begins for bronze age shennanigans
Posted by Konsumterra at Monday, July 07, 2014