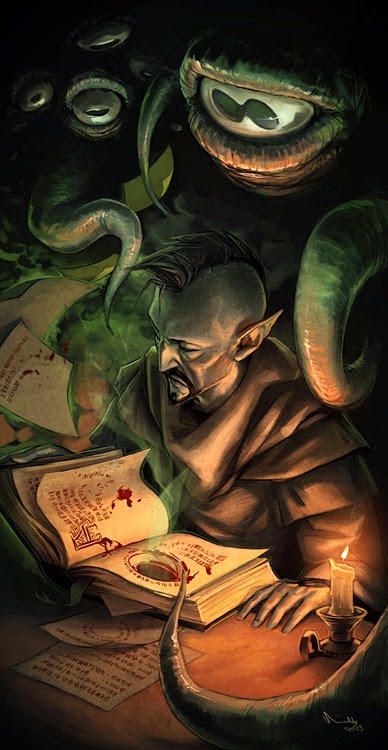 So a dm was away so ran extra DnD session. Ive been plying my 6 gun gorilla again in wild west game trying to get ppl to like me even though i end up killing everyone i touch....sniff.

Having just killed 13 kobolds all very exited and went to dungeon armoury that ow mostly empty. Went off side passage and into room with plinth and jade idol on it. Found awas n seam in floor so lassoed the idol with a pole lasso and floor fell away around plnith leaving it a pit into a muddy corpse filled pit crawling with thread worm parasites. Too gross to look for loot. Was a door on other side of pit but party move to the triangle chamber on grandpas map. Had a nice low grade jade idol.

Before that chamber as a side passage. was a side coridoor they looked in. From square room with passage each direction could see three garbage strewn rooms. One with two double dungeon door sets. One with a door at end and another with a donkey ladened with adventurer loot glad to see light and humans. While they looked at supplies they themselves had forgotten to get beserkers sleeping under trash tried to ambush them. The attack did stop the deadly archer getting free shots at them so helped them a bit. Beserks proved a menace as they would not die to bled out. Gory maniacs hurt most of party. Found a wallet of 500 ep which means someone is paying beserkers to hang around in dungeon very well as last gang had same loot. Party well equipt with healing magic and skills now so all back on feet.

Went into side room and looked about thoroughly before secret door opened and 11 kobolds charged out giving party a few bumps and scratches and were slaughtered. In their secret cupboard was a spyhole at human height so kobolds must have been standing on each others heads. Also found silver in tax collectors satchel. Angel stated it was best to return to officials and paid half from her own pocket when archer complained.

Went back and opened one of dungeon doors with some bashing. Angel crept forward to use her extended low light vision and saw dungeon with all the trimmings of  torture and cells. Two bugbears lept out and one fell to arrows. Survivor bashed a few before he went down. Four cells with one looking empty but bed possible so went in calling for anyone. Giant rat under bed lept out and got three arrows. Just a pile of monster laundry under covers.

Next room had a child "Russetto Capo"in red stockings and a hooded cape crying for grandma. Angel took her to her side. Another girl was a gypsy whose dad was working for Chanduru the mad sorcerer and had her locked up. She had been pressured to marry the sorcerer. Archer gave her a knife as she was keen to stab dungeon monsters and new a bit about layout. Told them of another large round hub a maze and where wizard lived. Last cell had a tame young bear with burned feet licking his paws. Angel healed him and fed him and set him free, Bear gratefully followed her.

Found room of garbage off side and bugbear beds. Archer went to pee on them and angel warned him. He got a few fleas hop on him. Found a small shrine to dungeon goddess of underworld and clerics warned she only was trouble if insulted though she was evil. Seeing the coin slot Archer smashed open the concealed locked panel and stole a hundred or so copper coins. Nobody else would touch them. Found a larger incomplete shrine with goddess more realistic with bird feet owls and chains. Left it alone. Found kobold scribe office where dungeon records kept. Took lots of paper as valuable and recyclable. Nobody could read it. More kobolds attacked and were killed, the bear killed lots in revenge for dancing lessons kobolds had given it on a stove top.

Saw entry to mist shrouded maze gypsy warned them about. Was a test for apprentices in olden times.

From triangle room went to doors of Chanduru's section. Big gates of the old wizard on them. Chanduru telling monsters he is reincarnation of old wizard. Knocked on door and gypsy girl replied we are here for delivery. Monsters replied wait a moment and they did but they hung back and shut the lanterns as chamber had torches. From another passage four bugbears and a ogre came. Party defending from corridor managed to keep back ogre. Bugbears went down fast and injured some party mooks and ogre didn't fair much better. Bear did well again.

Double doors opened and a 8 foot column of fire with a evil face came forth.

"You killed my bodyguards! Face my wrath!"

Party fled from dungeon and went to pub. Bear went into woods looking back on party fondly. Healed up best they could and Angel and Archer went to city to sell goods. Left child with Mother One Tooth's boarding house and stayed night. Returned a pouch of silver in tax collector sack to secret police. After they interrogated her with a inquisitor priest they were so amazed hey gave her a reward and a bounty poster for Chanduru for tax theft. Back to pub near dungeon Archer managed to bed the gypsy girl and let her keep the dagger. He tried again next day but she wanted some armour. Angel said they should get married or they will attract demons by unlawful shagging.

Returned to dungeon day after with gypsy girl who wants revenge on kobolds and her father to receive justice. Fed up the donkey who happily followed them too.In the entry this time 8 orcs were camping eating a kobold on a spit. Lured them out then shot them and chased them inside and killed them all. Gypsy took their daggers.

Then back inside for more murder and plunder....

Meanwhile Chanduru has recovered his phantasmal force and ventriloquism spells and has been spending his loot on more bodyguards and elites. Dungeon has been half trashed.
Posted by Konsumterra at Friday, July 18, 2014