Psychonlog: Inside the Dead God 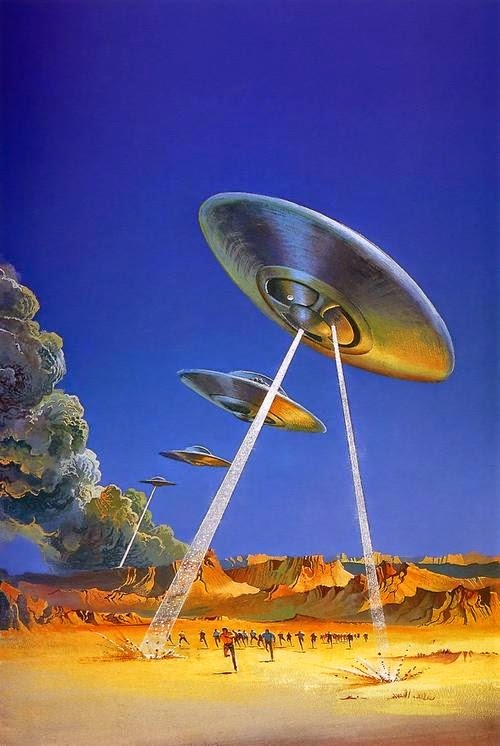 Dedicated to John Pertwee and the City of Death.

So the party split up. The 5 foot tongue thief and the unicorn changeling woman met a octopus cthulhu worshipper and managed to find a security pass to  approach the kilometer long god corpse covered in mud in the swamp. The all had a menagerie of pets, mounts and followers.

Approached the death field and the Tako pulled off his genital tentacle and gave it the pass then used his psionic regeneration to grow a new one.

The tentacle passed the zone so they entered the armpit doorway.

Inside was a white room with a desicated corpse. As they went to examine the door behind them vanished.

The corpse was a dead theif with some coins and potions. When the walls were touched geometric circuit like frieze of patterns appeared. Was  logic puzzle the party managed to solve and a new door appeared in wall. Began to realize inside the god was pocket dimension. Down a corridor they found several more puzzle/trap rooms with coloured floor tiles and others that experienced adventurers can methodically solve and yawn at.

Inside the head was a great crystal chamber with a throne. A huge crystal stalactite above it terminated in a helmet. Mysterious fluid inside the structure swelled about. The unicorn woman tried it on and writhed about screaming as her brain was sucked out to swim freely in the fluid. She became aware of the dead god and received a list of the materials to repair it. Then her brain crawled back and her skull was repaired and she fell off the throne gasping with a scar.

The thief decided to do it to (?) and only just escaped. The Tako octopus decided this was not so good having his brains a bit more spread out. Also suspicious the space god was an enemy of Cthulhu. The realized repairing the god, despite many resourced in the hex would require a life time of conquest and rebuilding all the ruined factories in the swamp. Then who knew what would happen.

As they debated what to do next eight greys with pocket lasers came from a unexplored passage and began firing. The heroes easily dispatched them and the octopus greedily grabbed the ray guns. They decided to explore from the direction the gray aliens had come from and found a saucer parked in a huge hanger. They sneaked up and two grey drones came outside and the thief ran one through from behind and others clubbed the other to pulp. A 8 foot humanoid silver robot came out and party scattered and hid. The octoppus picked up a grey corpse and hold it like a marionette from behind clumsily walked up to the saucer ramp. The robot was concerned for it's master and approached then the thief ran it through. Unicorn and octopus joined in destroying it swiftly.

They took the saucer and lived in it for a month. Several learned to peak grey and managed to manipulate the masterless AI. Recharged the ten ray guns and decided to fly. AI asked the space god to open the hanger doors and they were flung into the sky.

From the edge of space they saw the hexegon covered planet. The one of the satelie gods shot them down. All scrambled into graph couches except the octopus who squeezed into a locker and shut the door.

Saucer crashed and was being flooded with yellow water with a salty unpleasant taste. The octopus dragged the others to the surface to a new sky. Tangerine sky over yellow lakes, magenta soil and cyan grasslands. Crawled ashore and found some fishermen. They explained to local factions who were in a tense alliance against invading bug men. Party stayed with them and heard about the local tribes and decided to head for the pleasure dome of a sorcerer to the north.

So they set off and encoundered some hostile hobgoblins they had a stand off with. Meanwhile the theif was murdering them from behind and dragging corpses into the bushes. When fight broke out hobgoblins realized hey were already depleted and panicked. The leader died and they were broken. They fled and were all killed from behind.

As the turned around a awkward bit of lake in path they saw Morlocks on riding slugs with hunting clubs. They could have fed but were feeling cocky.

The theif on his riding flightless bat took a hidden position. The octopus was mounted on his land squid with his human girl servant. The unicorn girl transformed from quadruped to human woman and adjusted her coconut bra. The morlocks demanded the party women which the party scoffed at. Meanwhile the theif stabbed a few slug riders but the slugs saw him with there eye stalks and became unsettled. The fight was on.

Morlocks dismounted and charged. Octopus paralyzed several with his mind and lept into fray with his hand axes. His land squid grabbed the leader and pulled him underground. The unicorn girl was wary and hung back. Morlocks began to fall but theif fled as hungry giant flesh eating slugs slowly chased him. Was encircled but he managed to acrobaticly run over hem and sprint away after feelin wounds. Alas the riding bat was caught in a hail of acid slug spit. Then several slugs stopped to tear the trusty bat into chunks of flesh.

Enraged the thief pulled out his pump action shotgun and walked into the slugs blasting them into slimy pieces of meat. The others culled the morlocks who started to flee.

Satisfied the party marched on to see the dome of the sorcerer....
Posted by Konsumterra at Friday, July 11, 2014