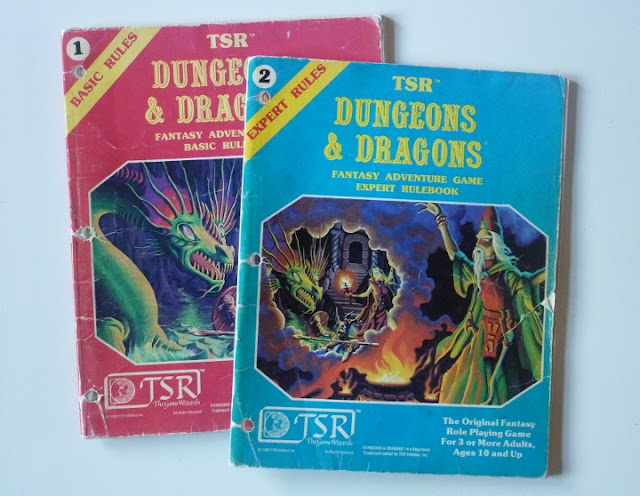 Sorry not much here of late - working and arthritis increased so Ive been sleeping as much as possible. Net a bit wonky too which doesn't help. Started my d100 towers but has gotten very detailed and sloooooow so i will put on hold and write bit by bit. Brain not up to table haiku or thinking much at moment.

Recently i traded Coc blood brothers 1 and players companion for 1981 editions of Dungeons and dragons. I have been using Cyclopedia version.

Some stuff i will go back to:

Encumbrance and movement rules - the cn measuement seems odd - 10 coins in a pound? I think gurps used 500 coins a pound or kilo which seems better. But i do like basic idea that armour is the big killer for encumbrance even if not realistic. Well made full plate so much better for mobility than chain with some plates added. But basic idea and having vaguer ENC system i liked as a basis. I will find my own weights and costs of stuff though. Interestingly str doesn't effect how much you can carry.

I like keeping class=race. Keeps other races as special, makes them rarer outsiders of their own race and humans. I like fairly traditional races but as i said earlier i have had no halflings played since 80s in any of my games. Dont really care for race limits.

I am impressed by brevity - 27 pages covers most of everything in basic book.

Intelligence affects your literacy which is nice and could have been meaner. Languages matter in my games plenty - players always keen to learn more.

I still cant believe how much we got out of 4 pages in expert book on adventures and castles in 80s.

Reaction bonus from charisma is gross - having monsters join you in "enthusiastic friendship" sounds really handy.

Ive never been able to read the name of land: Specularum without sniggering

I had forgotten how good oil and holy water are in these editions - its like i never read rules properly ever.

Rereading magic sword tables - what if whole party played magic weapons with peons to carry them?

Gnomes here so similar to dwarves why bother

DnD Next...
Did look at a new dnd testpack i was shown. Actually looks simple. Wizards seem least changed with no special abilities beyond spells. Monks now shoot fire. Druids shape shifting interesting and gross spells. Clerics interesting but lots space needed for religions which could have been briefer. Also having multiple holy powers interesting but i think one power and some spells is fine. Id rather more cult specific spells. I think i prefer simple character classes on 2 pages tops with many of the special abilities here could be for varied classes and available to others. Paladin too close to cleric i wouldn't bother. Barbarian and ranger didn't excite me much. Backgrounds are too in depth. Skill system, yet another one and then countless feats and class abilities on top. I got some ideas i liked and it looks playable and ill probably look at final product and perhaps play but i wouldn't run it. The art will be the killer or winner for me. While I admire pathfinders look i find it a bit overwhelming and over the top. I would happily employ jim holloway myself. If anything I would like to see more realistic art like osprey militaria books and angus mcbride over comicbook/animae/console game look.

I may have another crack at my emo basic book tonight
Posted by Konsumterra at Friday, June 28, 2013