Gamelog: In the Barron's Dungeons 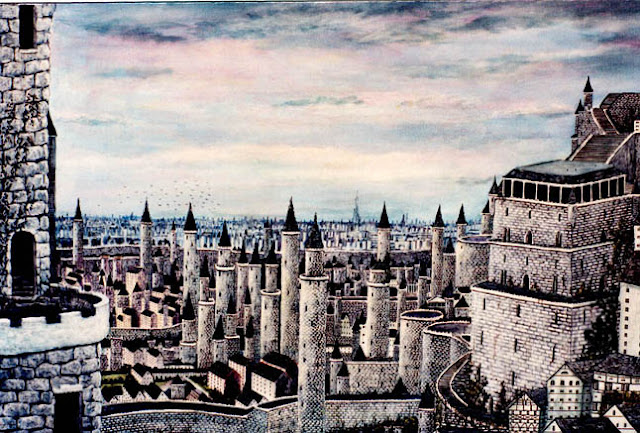 Well the party went to the city gates and got in line. Declared no artifacts, mutants, plague carriers. Went in best dressed and charged noble rates, except the drunk monk Forest who got in for a copper as a holyman. Someone shouted bards fee for entertaining the line up. Allowed in with 30 day guest visa. Went straight to money changer to swap over a 120lb of copper coins for gold. Sold baroque furniture and some fancy outfits from fish cult horde. Decided to cash in that reward certificate for 200gp from the Barron's secret police (gee that was nice of them, guess under their masks they are not so bad). Have adopted the name Triple A Dungeon Destruction Company for city red tape.

Party went into military fort district and escorted to secret police. Papers held for them at gate of entry. Taken to room in barbican and given food and drink while reward being processed. Huge gates slid over entry. Agent X941 discussed party prowess, offered more food and drink and ammo. Then offered poison remedies and pre paid raise dead service on side.

Party captured for city dungeon games. Compete with team of four barbarian brothers in dungeon watched by at least dozens of scrying devices and spells. Some viewers project as illusions for common guildsmen to see. Peasants get a puppet show version during the following week. Gold! Prizes! Danger! Gambling! Party bet all money double odds on livng.

Traps, tunnels, tricks and near death.

Emy the Wizard 4 and her cousins followers a dog named hunter and Douglas the reformed farm lad now a 2nd lv fighter in chain. Her usual collection of finches who live on her.

Lynden the Bard 4 with his trusty dwarf and thief girlfriend. Now second level.

Humblezorg the sorcerer taken up with mystery forest women witches who admired his cat while he was looking for missing dog.

So into the dungeon when the horns sounded, with no idea of goal except to compete with barbarians.

Taunted by arrogant Nilbog who accidentally spoke backwards a few times and drank enough of monks wine to kill 6 goblins. Party without healing spells to harm the negative life form dog piled him and force fed a healing berry. Then he played ball and helped party.

Many many traps that dwarf, bard and thief dealt with.

Swarm of kobolds all zonked by one sleep spell.

A doppelganger disguised as a barbarian. Emy charmed him to be sure and he resisted and betrayed her almost killing her body guard Douglas.

Found a deadfall with shaft above door. Monk climbed up to find goblins napping and awaiting bell to ring so they drop a rock on party. He killed them both.

A wounded barbarian trapped under a falling gate, Wasn't too grateful. Left him behind.

An ogre who throws bricks.

Two giant scorpions that injured everybody before being killed.

Found a baby kobold and an adult trap repair kobold.

Some peasants in dungeon unauthorised looking for stuff. Ran away, one trapped, another eaten by kobolds, another opened an exploding door.

Finally got to surface to met by cheering mob, dancing girls with beer, sacks of gold and the Baron. Granted citizenship and gold keys. Staggered out to receive gold and off to find a guest house for rest, study and rejuvination. Almost all died, most members with one or two hp - no proper healer in party. Most party on last HP with one unconscious.

Filled about 4 geomorph squares on fly - everything random from my Redbrick book of tables. Going to have another edit based on in play use. Being accused of planning everything a good sign. Monk with attacks of 1d6+2/1d6+2/1d2/1d2. Critical hit on d2 punch is not so awesome....yet. Party now 5th level so lv 3 spells in party now. Monk learned trick of healing 1hp if drinks heavily after a fight and improved that d2 to a d4 with martial arts - he only has +3 armour still. Bard rarely used power - hitting people still seems more useful. Been handy having theif and dwarf npcs about. Now npcs going on 3rd lv need proper character sheets.

Humblezorg back in village looking for his dog when meets strange forest women who keep him company. Big evil kitty looking happy lots.