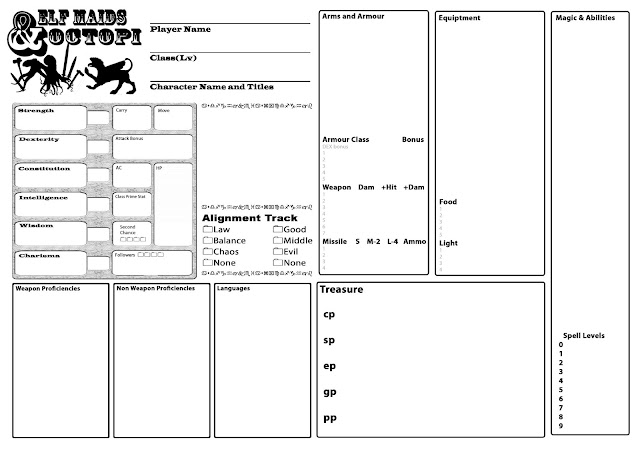 My current DnD sheet  for my emo rules - characters at 3rd+ need more space - ended up leaving square in middle for players to purpose as they please. Main deviation mys alignment - pick one from each column. Most peasants have none or or occasionally balance or middle or good. Most alignments are too fanatical. Balance or middle help you cope with being in between extreme alignments like opposing lords or little countries between empires or for merchants. Second chance points are = wisdom bonus and can be used to stop bleeding, heal 1hp, re-roll one dice, call help, retrospectively chooses a better spell or item you should have had on you. This and Psionics tried to make WIS good for every one. I use stats for saves. 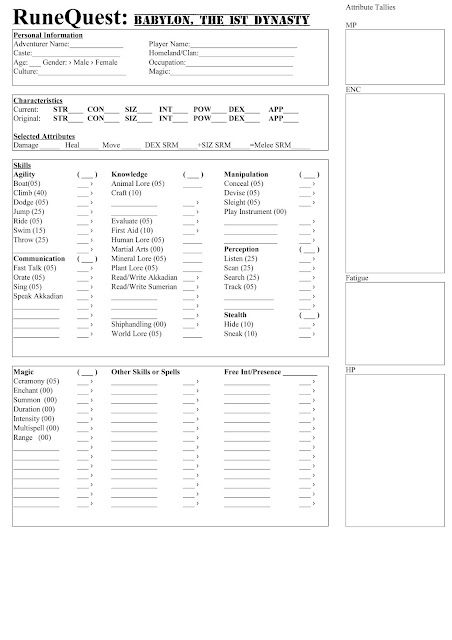 This is old RQ3 Babylon pc sheet the weapon bit fell of bottom. Or had a second sheet for combat. 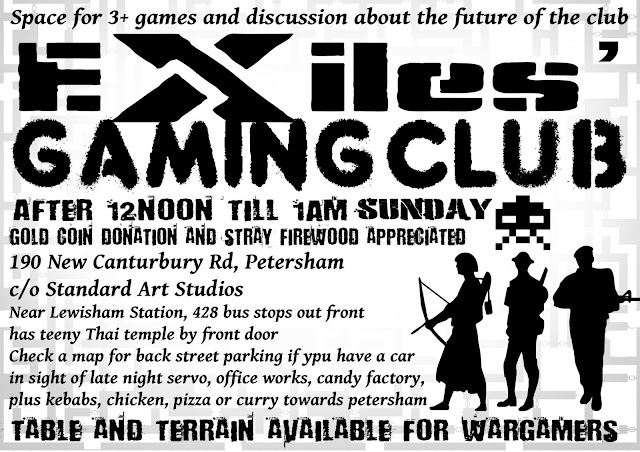 A quick flyer yes with a typo, this in my house next few weeks. A couple of story telling games and i ran cthulhu arkham county sand box with about six players come and go over over 9 hours. Was a bit slow till i realized one story type gamer was roleplaying too much stuff that made objectives and narrative harder (like wanting to play every meeting new players in too much detail with no point and risk of violence and stupid TPK) and was being too careful. Spent most of session butting heads with hillbillies who were merely murderer redneck thugs but did get them sent to prison. So when they ignored the kids stories about the swamp monster to show the npc Gaspard a hyperborean statue a Dark young turned up. Hey that tree is getting closer. Lets turn are backs then turn quickly to see if it moves. Crazy talk but ok. Ahhhhhhhh. Players ranaway and hid in gorge while tentacles searched for them. Escaped. Two players down to 20 something san.

Will get the players a bit faster next time. Now have more clues and know everywhere in Dunwich is horrible. Gaspard the Hyperborean is actually dating character from last game, a girl who is studying Atlantis to support her occult geology theories (30% Mythos and has feud with Madam Blavatskey). Should get spellunking into horror holes next time.
Posted by Konsumterra at Sunday, June 09, 2013