Gamelog: From rich to ruin in Schädel Port 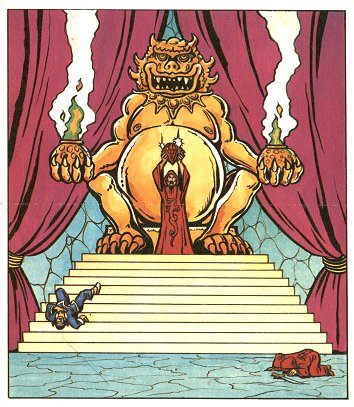 Our Players
all 5th level

Andy as Lynden the Druid school Bard with his new magic lute, keen to test his new bard hypnosis powers. With his GF Bambi the thief and faithful Dwarf bodyguard BarBar. Used bard powers today more than any other time. Now serves the balance and goodness. Has recently shifted alignment from all these pure cosmic law guys he hangs with to being against law or chaos.

Matt as Forest the drunk monk martial arts master, who actually heals by drinking after every fight. Has become a whirling death machine but only light armoured. His battlegoat Tree has chainmail barding and silvered horns. Caries healing supplies and grog. Has set up party brewery. Helping to break my martial art rules but that's what monks should be all about. Kobold in a carry case for instant labour.

Carolina as Emy the lady wizard of the tower of birds school of the imperial capitol. Gone emo since her cleric pal drained by shadows and learned scythe. Uses bird motif spellbook and her infamous multiple carnivorous finch swarm spells. Has her cousins bodyguard Douglas now a veteran swordsman and a tracker dog named hunter. Also a expert with shortbow (INT bonus slots can buy any wp or nwp).

Mark as Humblezorg the modronic sorcerer of pure Law. Has modronic goggles lets him see all matter made of tiny modrons holding onto each other. He uses to teach others. Also gives him knowledge of comprehend language. Was unseen servant wand too. Can sense modronic or lawful outsiders within a mile now, keen to develop his eye of law power. Sorcerer minor powers help compete with wizards nwp and spell selection increases. He also had charisma increase which paid off with charisma rolls, extra follower and a bonus spell (kept STR at 7). Lost dog cuddles missing but still has new pet hellcat and new girlfriend a lawful evil sorceress. With a raised CHA, Gary the farmer sidekick will be back from running brewery.

Heroes in Schädel Port spending a day looking for rooms to rent for a new party urban residence (have rooms in a castle, a dwarf dungeon, a wizard tower, several villages and a few shrines now). Found some seedy bars where new dungeon rush adventurers mocked party on 3 occasions, in a pub in pig trotters restaurant and a ruined squat. Found signs of drug abuse everywhere with alleys of black lotus addicts unconscious.  Found a floor above Ms Miggin's pie shop on sweeny lane to rent and even got a free pie for shutting up. Got some straw mattresses brought in and rested night.

Next day did some shopping and looked at the uni, met some druids and priests, necromancers. Ms Miggin's lads recruited as security service by the party (these guys are cheap). Bought a gender change potion in an alley (you never know). Some healing potions. Looked up guilds to join but so many overlapping groups of different social clique. Emy in uni got a poop lobbed on her by a imp familiar on a bender and she now always has clean cantrip spell. Found an interesting auction but party decided role-playing auction speculators less exiting than fighting. Next day party fighting fit and off to the ruin district.

Ms Miggin gave party a goodby pie (party know she is evil just hope its lawful kind). Marched to the rich part of town then on to the kings bridge to downtown. Enclosed bridge road for rich filled with incense, spice and perfume, balconies dripping in baroque gilt ornament, choirs and heavenly music forbidden for commoners to see. A rich kid in a palanquin shot the party thief with a crossbow for fun (cheap common trash!). Party put up with while Humblezorg tried to glue a palanquin bearer and poor guy got flogged.

In Guildentown where the richest slumb dwellers live, Lynden was almost run down by a donkey wagon with a shopkeeper at the reigns. Humblezorg ignited his chariots fake velvet interior, the guy crashed and guards said vehicle too shabby for district. Party now legal to spellcast on fellow citizens in self defense. They are being eye for an eye lawful not chaotic, honest.

In slumbs they saw poverty and desperation of immigrants flooding to city. Saw a rat wizard with book of living tattooed rats spy on them. Walked up hill through the ancient pre human wall into the ruined core of downtown. Also open to mutant town, goblin town and gangland warren districts. Party know some towers have seals from city and require a license to open. But they dont care.

Left the ghetto sprawl and wallside are and headed deep into an ancient abandoned suburb with some towers. As they crossed a great temple ruin plaza 40 skeletons charged from ruins. Party pulled back and bard put down entangle field in front of them. A hail of missiles, a flaming sorcery sphere and swarms of finches blasted entrapped undead, while the monk and dwarf crushed those that got through. Entangled vegetation burned out and skeletons destroyed in a few rounds, the party charged sending death fields of birds and fire into the open doors. Party bum rushed screaming necromancer apprentice as spells expired and he surrounded. Basicly argued their superiority and wanted his masters location. Raided a nearby crypt. Used birds to set off skullbomb and monk obliterated guard zombies. Emy chromatic orbed and Humblezorg magic missiled the necromancer before he could escape in smoke form. The apprentice tried to betray party and was back stabbed by thief and left for cat and witch to finish. Bodyguards surrendered when boss dead and party spared them.  Emy Looted his books, was very pleased by haul. Found piles of elder race scrolls.

Scrambling up a rubbley hillside they heard chanting. The theif climbed up to spy on a dozen cultists of the Black lotus Society and a priest in a ritual with a ledger and a box. Humblezorg climbed up a wall above spectacle and did that magical thing a sorcerer loves most to do - cast his first fireball. All acolytes chared to ash and a few saved and -8hp. Priest saved and singed fled into one of three towers. Party grabbed loot and pressed on, monk ran in and upstairs and bard behind playing warsongs. Priest was fully healed and cast 3rd lv defence spell and monk had a few rounds battle before humblezorg cast sleep on poor guy. He fell 2 stories awoke and had 6 guys beat him to pulp with bonuses.

Found letter from hidden master and fortune in black lotus resin, the biggest most compact haul party ever....more on that later.


Two other towers. One plastered with hundreds of years of seals of the state posters, forbidding unlicensed entry. Other tower had no doors. Pasing goblins came for friendly cultist BBQ and told party they see lights all the time. They gave the goblins the evil high priest corpse too.

Emy spiderclimbed up with Humblezorg and the thief. Thief went first and then screamed and fell. Humblezorg featherfalled her to safety. She was frost bitten and in panic. Flunkeys held her down till she recovered. Most followers battered a bit by now. So climbers got on roof with ladder and found astrology map estimated 3000 years out of date by Emy. Opened trapdoor into chamber with ancient disused lab. Someone downstairs? Fireball. Undead screams and casts fear on party, Douglas runs off roof and survives 60 foot drop by one hp then rest of followers chase him into ruins. Gang in tower try swarm spell and a firewall seperates party from lower level. Undead not screaming from his fireball, more upset by his spell library and alchemy lab and ice storming burned remains. Party flee - monk jumps only slightly hurt, Humblezorg feathrfalls and Emy runs down wall. Lyndon grabbed a sack of dried potion bottles and slid down the rope. Lich hates light and trying to mend books and douse fire. Sent huge cloud of undead ravens chased party into cultists tower to hide.

Sometimes sandbox = biting off more than you can chew. Anyway new party enemy and can you say invisible stalker?

Party back home to lick wounds. Told by thief that drugs can be sold in drain at midnight for 2000 gp. Humblezorg takes some for "study" (or what sorcerers call research). Party decorate new pad with loot. Dried potions had a few still usable. Cult books in Eastern tongue drug manifests and ledgers of customers by name who owe cult. Necromancer collection of elder scrolls fragments of a spell he was researching.

Some punk new heroes will see them limping home one day...

good to see some systems breaking and new rules being clarified as we go with house rules. Been a while since I had fireball packing mid level party - i need to relearn threatening and balance.