Call of Cthulhu 1st vs 6th ed Characters and BRP 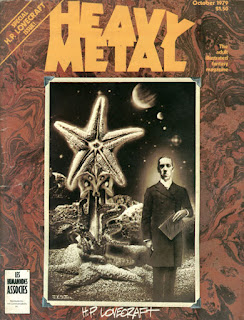 So finally trying to crawl out of my amber bubble of old school fun, I started my Arkham County Sandbox game. Get a job and room in Arkham, visit sunny Kingsport, go on the ancestral trail to Insmouth, or Hiking in Dunwhich.

A recently closed game club is using my ground floor on Sundays now under the name of Exiles. Good to use the space and meet more gamers.I thought this my best public game as people can jump in and out as other games start. And it is the closest to a modern game I played. I had noticed a few changes but this game brought out more.

But wait there is more

When players taking more time to choose skills you see them sucked in to the character as a precious snowflake more. More worried about having every skill. Every character better at combat.  These really change the game. Felt a bit more Bonny and Clyde or Gangbusters.

Sam Peckinpah's "The Shadow over Insmouth" woulda been great.

I dont mind these changes in this game too much because it is easier for players in this situation. If I was to be serious I think Id go back and use my 1st to 3rd editions. Why didn't Pulp Cthulhu come out - because it already had been out for years.

An Agent 13/Mens Sweat Mag/Cthulhu pulp would be awesome and id use modern rules and some extra exotic BRP skills to blow all those points on. Indiana Jones with a bit more Italian Exploitation. The shadow battles the great old ones.

Some rules to steal for K2LU/BRP
I used these in my BRP cyberpunk, BRP space, BRP Spies and Cthulhu Now. With one second rounds, average battle 2 seconds. Ballistic resistant plate mail and electric halberds would be awesome to bash monsters with. In SF game heroes used pulse lasers while backward colonists with 3d printers only had automatic rifles - these rules made lasers horrifying. Party were space super science ninjas after all. Cool villains used las proof armour and swords. To be fair i used my card bonus system in these games.

Top Secret SI/Gangbusters two types of Damage
In these games you have two kinds of damage - lethal and stun. Stun damage is for using fists and blunt weapons to defeat a foe without killing them. Evey 4 points of stun equals one pont of lethal damage. HP boxes on your sheet get one line for stun damage and a cross for lethal. When location stun hits part is temporarily usesless or hindered. When whole body stunned to zero is a KO. Kill damage supercedes stun damage - if I have 3 boxes slashed out from stun and i get one hp kill damage. I will have two stun boxes and one kill box marked. Kill damage takes regular time to recover. Stun damage recovers one hp per hour in each location if locations used. This system make death rarer from fist fights and characters can be captured or they can take prisoners. Gives more choices than killing a person.  I guess these games wanted characters to be captured and to be able to have fist fights every scene without killing.

GURPS Income
All gurps games do this why cant history books? list income of various jobs which I have used in Cthulhu for basic wages very well for 1920s, 1890s and more. Really helps you get inside a culture. I Also have sears and roebuck 1927 and 1890s version. Handy.

Hit Locations
I generally prefer in my SF or fantasy systems and leave Cthulhu simple but Cthulhu now I make grittier. I sometimes roll locations in Cthulhu when partial cover in fight and to describe gore in firefights. Old stormbringer severe wound system was great too.

Recoil Rules
Guns get standard fire rates, but rate based on recoil management not the game system of making big guns slower. Recoil score starts at zero and gets worse every shot. Stopping shooting for one round reverts penalty to zero again. Most guns can fire either 2 shots or 2 short (3 bullet) bursts or one large burst per round. Rifles and MGs fire 10 shot bursts, Pistols and SMGs fire 20 shot bursts. Miniguns fire 60-100 per burst depending on model. I also used 1 second combat rounds.

Use two hands on a one handed gun +5
Use one hand on a two handed gun -10
Stock on pistol or SMG (folding fine) +5
Braced or Bipod +5
Tripod +10
Laser Targeter +5
Light Recoil Suppressor +5
Heavy Recoil Suppressor harness +10
Gravitic Suppressor mount +15
In Low G this sucks even more - why Gyrojet, Gauss and laser guns handy in space
Per Bullet in burst +5
Firing with two guns -10 each
Fire favoring or using off hand -10
Extra round aiming +5
Extra two rounds aiming with scope +15

Seems really tedious but in spy genre this detail really helps tension and discriminate between guns and accessories. Also fights just dont last that long that often. Turns out reloading that revolver or pistol counts as a rest. All you need is one round rest to revert to zero recoil mod. Pulse lasers are so cool.

Booster cards for RQ with standard card deck
Idea from TORG and card games except i use normal playing card decks. If I did again would tie into magic points somehow. Made all games fun, also had booster cards on character generation for bonus choose one or one random and one GM choice (Not popular option).
http://elfmaidsandoctopi.blogspot.com.au/2012/12/the-amazing-jeff-dee-on-old-school.html

Other Stuff to do
I May do my own BRM Modern and RQ Sheet yet
Make superpower rules for BRP less like champions more like MSH
Use Cthulhu as the Gateway RPG to BRP
Then run RQ, Cyberpunk, Superworld, Ringworld, Pendagon type stuff more again

Imersive Larp and story games i will give a go occasional but i dont want to learn someones personal occult system and personal symbolism in a hardcore role playing game of thrones drama fantasy one. I dont want to get into a writers head really. Unless im getting Greg Stafford or someone awesome lke JB one of two GMs who kept me so entertained i didn't need to make mischief (as much). Im kinda over Brit comic writers using golden dawn magic a hundred years later still in every story.

I guess i like games with some goal oriented task - even if self set on sandbox, some entertaining mechanism for dice (only kind of gambling i can enjoy), and interesting fantasy world or at least a fun romp through retro game tropes for nostalgia. I always enjoy worlds with intrigue, politics a bit of history, mythic tourism and heroes as catalysts for campaign events but i still wanna have adventure and fight stuff and find cool things and facts not just talk about our characters personal traumas or how awesome everything they do is in hyper detail. That exists outside the scope of the adventure narrative if it doesn't drive story or action - it could be in players blog or back story. Personal enemies, people from your past, power struggles and intrigues. It should come up in stories and be used to drive narrative. Revelations as part of adventure in play is more exiting than hearing your family tree from the first human while im trying to kill a rust monster with a semi-dead piercer. OK it would be funny to play like that once.

I like story gamers who stir up trouble and game threads yet can work together to get stuff done. RQ has idiology demands with every magic system which creates great racial and magical tensions in high powered parties. Our parties did jerk each other about and act tough to each other competitively but when it came to fighting demons in the Hellpits of Smithville we a single engine of demon crushing fury. We only accelerated the entropy of the multiverse a bit and one player secret solo actions resulted in 2/5ths of all elves being killed in a civil war but we like to think we helped a bit too.

I guess i am meeting wider range of gamers 99% are awesome rest are people who inspire me to be less like them. I like meeting scientists and math and IT guys. Some are mechanists who really latch onto mechanics to advance and find new ways to stack conditions (for better or for worse). I grew up with survivalist gamers 8-30 years older than me vetrans and military experts and guys that stockpiled for the end times. Who will have personal anecdotes of horrer to justify stuff in rpg, offer to demonstrate real skills with just kitchen or bathroom products. Some were funny clever people some were borderline and were into gaming for very different reasons. Many ended up in defense industry. I haven't meant anyone like that in a while really.

Thats just what im thinking aloud so please dont cut yourself or cry if my taste happens to be different.