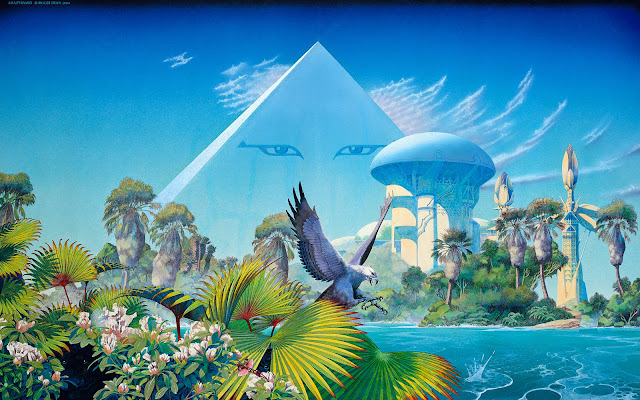 One problem of being Australian and liking fantasy in Australia is we have these myths from europe and a landscape that is pretty much still alienated from white settlement. If I want a break from European fantasy, using local mythology doesn't sit well. Problem as this is history and religion to living people. Archeology here really is grave robbing somebodies family. Also Aboriginal persons I know express a idea of ownership of their art and symbols far more serious than modern copyright. For some it makes you sick if you play with art falsely (government stole art used on money, paid a pittance after complaints). Some say meaning is secret and spoiled if spoken to outsiders. Anyway the film Fern Gulley is pretty awful having kinda white fairies in Australian bush. Beloved kids authors in Australia did same but might have a black fairy as a rival.  Dreamtime is not a new age wonderland for white hippies, its scary. Anyways basically dont want go there.

European mythology gets caught up in nationalism at times and assigning sat mods for real races is an issue at too. 1890s ideas of race influenced all modern fantasy and racism. Making a really weird world gets all that out the way.

Clark ashton smith was epitome of weird fantasy. Burroughs Mars novels also. Alien fantasy worlds have benefit of being totally alien and no issues of confusion from earth. Tukemal a classic of genre also. Downside is inventing alien fauna and flora and language. Influence of this and weird science elements in DnD have increased in recent times. Im tempted more and more by anomalous sub surface environment. Dungeon of signs has some good content like this too. I always said gamma world was the DnD weird science source book and want some ideas from that. I never got into dark sun being a wizard player and survival gaming not my thing (everyone betrays you, tedious survivalist and criminal games) but some good ideas and a brave new world of fantasy. Jack Vance an influence too. Nightland and Barefoot in the head by Aldis and Lumleys lost world. I dont normally like wild magic but magical weather and like storms affect different magicians. Moorcocks Hawkmoon including Granbrettan and scientists are cool too. Adventure time a lil bit. Heavy Metal and panel van art. 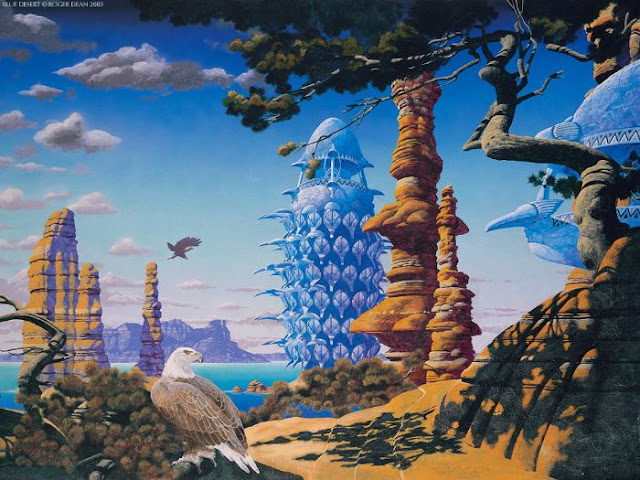 Under heavenly auroras and the swirling colored clouds, is a scarred ancient world of wonder. Ancient gods in the heavens and beneath the earth sometimes commune with humans and offer them aid and advice.  The blasted world has canyons and craters and ancient metal and greystone ruins with writing nobody can comprehend without magic or psionics or aid from the gods. Ancient weapons too are found beneath the ash heaps of old battles. The clouds and lights give men strange dreams and their different odours seem to change behavior and moods over huge areas. In the monastries and secret bunkers and dungeons some of the strange relics dont make sense. Some of the magically encoded texts talk about an age nothing like the present and fails to fit in with conventional histories proposed by every city state. And even when shown these facts and mysteries many simply cannot comprehend the answers any more than read an ancient inscription.

Common men of many lands come in many pigments, some hairless or fur covered, others short or tall. Dwarves (or Morlocks) are sub men who live in subterranean cities, often serving gods or ancient death machines in ruined sub cities. Eldren (or Eloi) appear to be chosen children of the gods and different breeds of these refined beings take on different qualities like the diabolic breeds having horns while the servants of light have halos, both develop wings when their powers are great. Halfmen (or Halfling or hobbit) are small humans bred to live in confined spaces, but live lives of pleasure and indulgence more like ancients than men of today. Beast men are animal hybrids and very common and often hostile to human kind, but some are allies or vassals of humans. Goblinoids are degenerate mutants hordes bread for war by evil gods and use Eldren DNA with human to create these brutes.  Mongrel Men and mutants crawl over the wastes and ruins, serving any master for food. 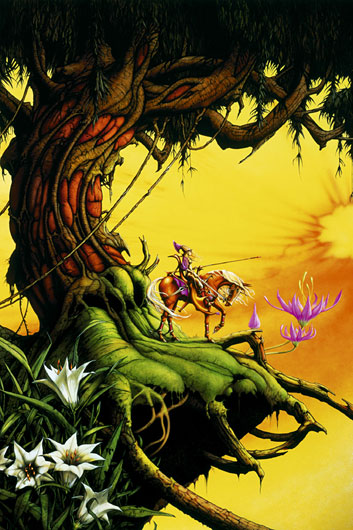 Warriors are the most common adventurer occupation and the most accepted.  Fighting is honest and respectable. Rogues are the next most common and include most city dwellers scheming for cash and use any dirty means to win. Priests call apon the high gods of the heavens, the subgods of the underworld or the surviving or weak gods of the surface world who are the easiest to kill. Wizards are men who learn the dread science of the ancients and understanding of the aether and auras to perform amazing mind feats. Commoners dread them and may burn them.

Sorcerers are like wizards but are atuned to eaether and auras and gods and can use powers without any elder science, learning from dreams instead. Monks are guardians of ancient lore determined to seize relics and protect the common man from black science, while wicked monks hoarde for gain and power. Many sects of different alignment exist and use exotic training to be living weapons and scholars. Bards are wandering minstrels who spread news and are welcomed by all for information. They see many things and learn many hints of lost secrets. Druids are like priests but instead commune with natural auraras and planetary consciousness and intemperate its non sentient will. Druid sects maintain balance of wilderness sheilding it from man or any form of monoculture which reduces bio diversity. Some are allies of beasts or plants. Some build monolithic structures to commune with planet. Others drain blood on create living dead hordes.

Mind mages including the various civilized Psion orders or the more common shamen, see the auras connecting all minds and possess incredible powers over the mind and body. Others develop knowledge of secrets of the future and otherworldly knowledge, while some manipulate matter. Some other persons or creatures may have psionic ability.

Alignment power opens yourself to communing with the gods and fighting for them with some possible power gain. Law, the Balance and chaos are one part of one axis, then Good Neutral and evil the other. Some tap into both axis. Most only give alignment lip service, some beings strongly aligned and speak the alignment languages.

Giants, dragons, undead, abound but artificial life forms like metal men and beasts also abound. Outsiders and Old ones have awoken or plunged to the planet into further chaos for unfathomable reasons. Most humans live in vast dungeon cities or in the shadow of citadels. Wizards while only understanding a fraction of the hidden truth, have done a few things beyond the ancient wonder workers which is why men hate them. 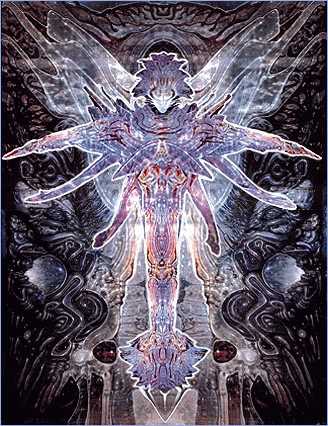 WTF is really going on...

In the near future psychotronic warfare erases all human memories and language and makes humans incapable of reading or communicating. AIs finish the war then build a collective hallucination for the human race and guide their new development (based on matrix style fantasy game engine as an emergency fix to keep people alive. All humans networked and under influence from bizarre electromagnetic and hallucinogenic clouds. Humans in deep space on Planet Ariel fear toxic polluted earth and want to sterilize it and start again. Sky is surreal with eddies, dust devils, high speed weird clouds. Their are glints of silver ring of dust visible from earth around the planet. The world is not as ancient as thought by most residents, maybe 75-2oo years after the war. A surprise to discover in play.

Greater AI gods have teleporters, replicators, tractor beams, orbital lasers, drones and servants. The greatest can interact and influence humans, weather and EM phenomena with effort. Nanoids have resculpted monuments and continents. Mountains and plains have been covered in crystal. Mountains of semisentient biomass from huge living things are riddled with tunnels and inhabitants. Forests of triffids quiver under strange skies. Liquid crystal clouds can form images weird sky pictures, making real things from mens dreams. Nano plagues created many monsters and races bread for war and cloned to replace dead humans. Part of earth frozen and dark other blasted by heat, rest tropical paradise. Ancient language is unreadable without training of a priest or wizard or magic. Dwarfs and Eldren have own written language (actualy many races not blocked by weapons included Klingon, Tolkien, and the most popular Mormon alphabet). Navigation dificult without divination due to weird magnetic field of world and psychedelic effects of local terrain and weather. AIs even shift travelers to distant lands in their sleep for reasons of their own. Terrain can change in a decade. Whole kingdoms might be erased with same people recycled into a new land with complete histories.

Chimera and sphinxes are best description of the strange hybrid creatures. Every land has reskinned monsters and perilous beasts. Exotic riding beasts and beast of burden are common. Mongrelmen vary from land to land with exotic colours and common animal parts. 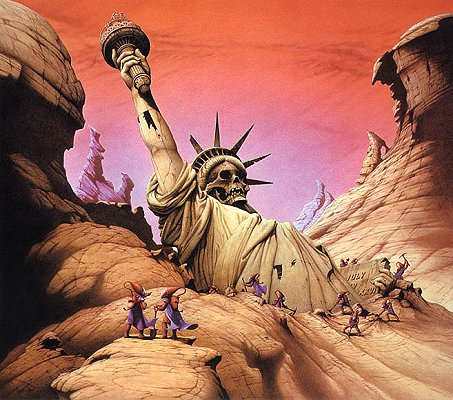 Some project might be some class specialties for the world, monsters and gods. Some one page adventures for a feel. Can recycle any modern maps or dungeons. Some hexcrawl tables and weird terrain and weather.
Posted by Konsumterra at Friday, April 26, 2013