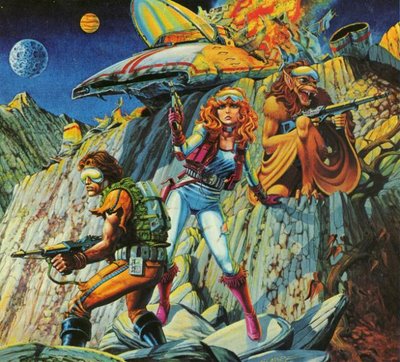 Ok enough with proficiencies but would consider some 10 level+ only NWP and WP.

TSR and its crazy making new systems for every game then changing radically was a bit of a pain. Top Secret went from levels to a % skill based point system (Top Secret SI was a very good game). Star Fronties a % system went to a universal table before being killed by level based Buck Rogers Game (quite good just needed better and more interior art). Poor Gamma world has many versions with very different rule sets (I like 2nd - one of most complete box games ever to me). Lack of respect for non DnD games was sad.

Star Frontiers
Star Frontiers is not quite dead with 2 online free mags keeping it alive. Reading behind the scenes stuff reveals designers at cross purposes. I liked as a kid because map was good for solo and with Dragon add ons was a good car wars style game. I liked robots and computers too and night hawks was great. Played lots in 80s. If you havent heard the last book Zebulons Guide totally changed mechanics but had some great tech. Lots of tech, space craft and races from this game i still use. Sathar, Zraraquor and Saurians were my favorite with the original 4 races close behind. The volturus races were interesting and woul have made good characters too. Zebs guide races didnt really do it for me. Hearing several based on gammaworld characters didnt surprise me. Dragon magazine had extra races, ships, tech and best of all heavy weapons and armour on vehicles (a later one on aquatic and military tech and vehicles). Ares magazine had very good simple star system generator and great psionics system.

The frontier setting felt like it was in beginning of a great period of expansion. Players coul effect universe quite alot. As a player i built a million credit freighter and did lots of solo play traveling goods, buying stuff and getting past random space hazards. One trip went really bad and i murdered my crew to save on wages or go bankrupt and blamed on pirates.

GDW games like traveller seemed very wargamer like to me. They did great settings but settings seemed to make players organized crime space scum who get betrayed lots. Building rules were great but overly complex while star frontiers was simple. Traveller, 2300 and megatraveller all good ideas, art and mechanics to plunder. Ringworld was my other favorite. Gurps SF stuff is great too - uplift, humanx, and others good too. Eclipse Phase would be best modern SF game. Actually one of best SF things ive ever read. Space horror without supernatural, alien remnants but no direct alien contact. TSR bug hunters not bad either.

Check out what a dead TSR game fans can do...

Link on my sidebar does same for 80s Marvel Superheroes Game

If Wizards sell more old games not just DnD pdf's this stuff like the Dragon Magazine free archive could vanish so grab everything in case your curious.

My longest SF game based on writing I started aged 10 as a blakes 7, starblazers, dr who, space 1999 fan. Used all of the above stuff. Best game with BRP/ringworld rules featured players an elite super team with a psionic power each and my booster card system. Kinda like traveller with battle of the planets anime - actually ran knighthawks intro module stories still. Players being agents made loot not an issue and kept personal possessions down. If there was a novel in me this would be it. 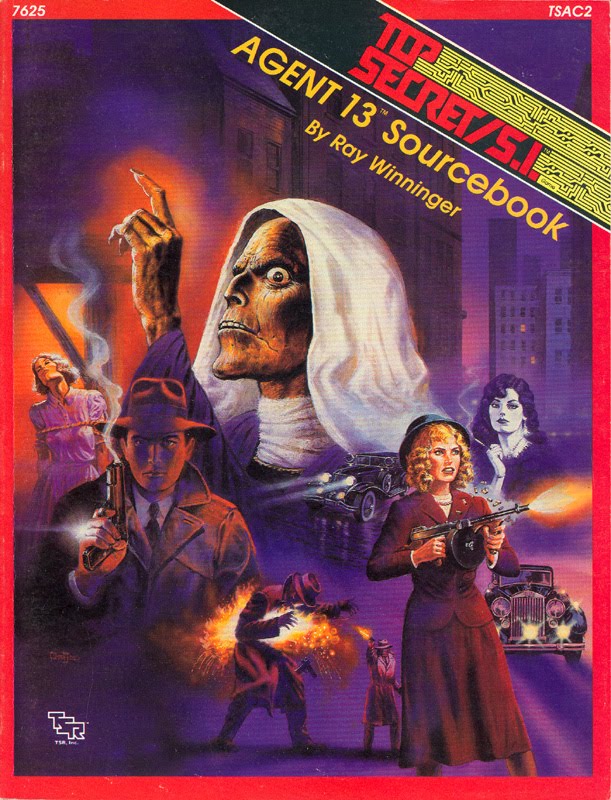 Top Secret/SI
Was a truly good system. Old version of game was level based and complex with many micro system kinda like AdnD. Had many good lists and i like the classes like confiscation, investigation and assasination. SI version was a very flexible and was fun. Grear damage system i added to Cthulhu (but this from gangbusters) Had many scenarios but the best two things:

Agent 13
A pulp mystery man setting for SI. With rules for powers and complete Agent 13 universe described. I just read the novel (reprinted again). Its classic pulp but less racist than real pulp era secret societies vs america from the old days (original buck rogers included). I like Gurps pulp too but the Agent 13 universe is very cool and the bad gus are a great example you could drop in any world.

The graphic novels were better looking but i have never had a good look at. Crikey! Talk of a film in production last year but apparently film was the projects original intention. Yesterdays RPGs could get film a film writer plundering that would be cool. 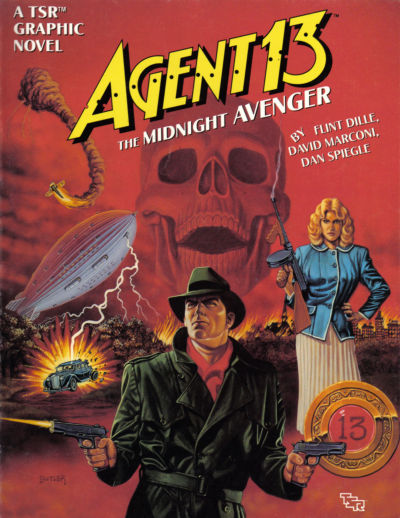 FREElancers
A low level cyberpunk/super hero setting with battlesuits and powers (all flawed interestingly). Two good novels but funny to read about a missed near future with many things common now, other still promised,  some absences that are funny. No tablets. No mobiles. Real computers seem better than most old sf games. Zebs guide had microcomputers with hardware/software aps that was a better predict than cyberpunk games. Buck rogers smart suits were great.

Anyway the 2 novels and 2 sourcebooks have great characters. And great decrepit separatist America on the brink of collapse with some ultra tech hot spots. Power weakness system is really special. One of best human/vehicle hit point systems ever. Great for Carwars, Cyberpunk or a superhero or plane shifting game. A comic of this would have been great. Shame TSR comics so bad in every way. Printing on butchers paper might have improved them.

Gangbusters
Would have made a great Topsecret/SI book. All products good for Cthulhu. NPCs, mobs and most detailed profit from crime rules of any game ever. Will do DnD vs gangbusters one day - bugbears and bootleggers. And parents thought this game more wholesome than DnD. Which leads to....

While Im here...
Inspired by Dark Dungeons the movie this is sooooo goood
http://daggerarts.blogspot.com.au/2013/04/4th-edition-is-response-to-dark-dungeons.html?showComment=1366816441844#c7279691000852377358I wished i had that spell to make parents buy books like marcie when i was 15. Instead I picked fruit and sold old stuff to afford new stuff (sniff). I was dropped this gem zine at a library during a CoC game, we turned our backs and this was dropped by someone who had waited and snuck behind our backs - creepy spying on teens. Cheif librarian of state spied on us due to a complaint. After he shook our hands and laughed that we weren't flying or casting spells in library and approved of teen DnD and hacker club for using library (1985). This post is gold. Thank you.

Posted by Konsumterra at Wednesday, April 24, 2013