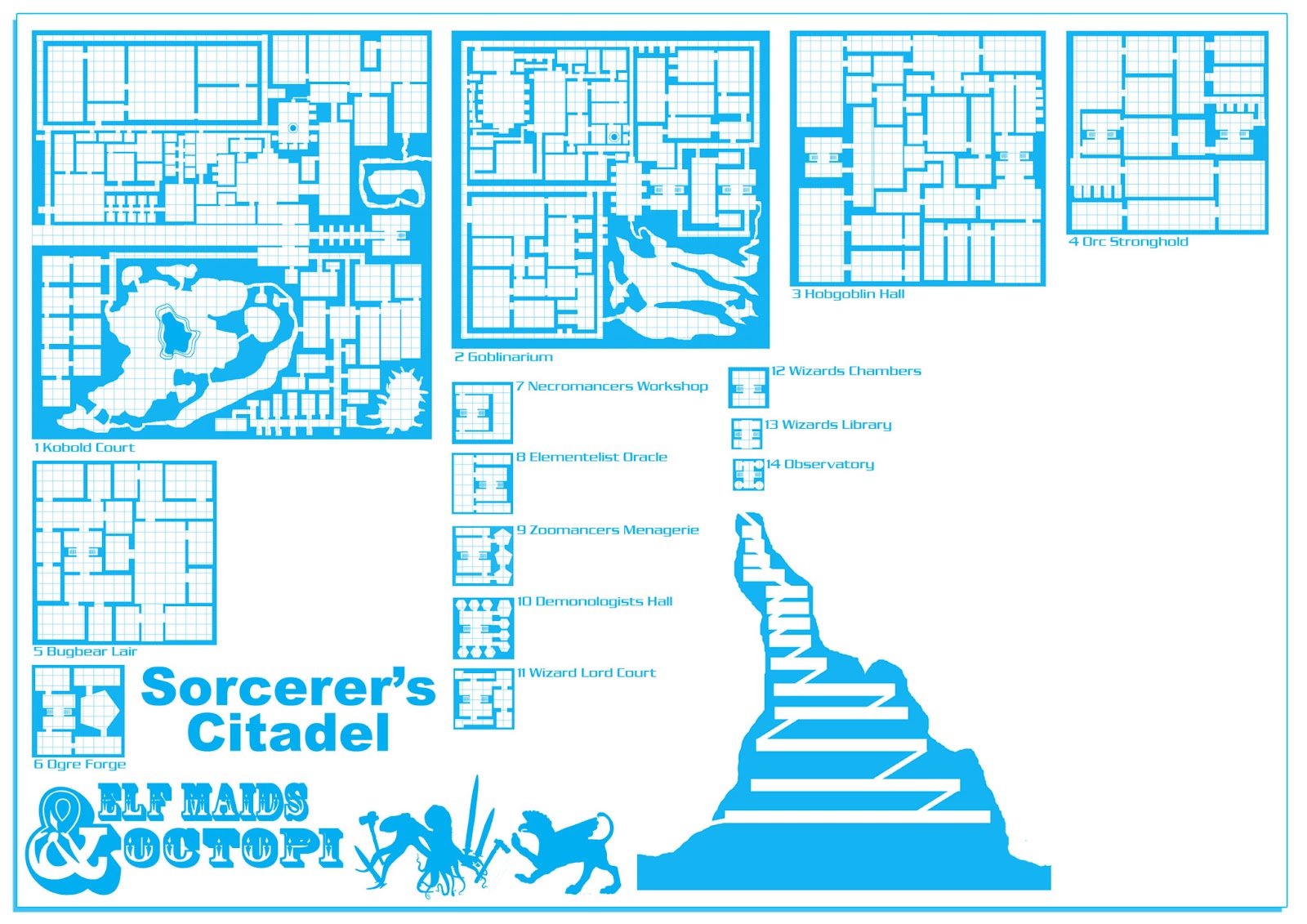 I want it to last about 4 sessions and wanted to play with levels as i seem to make mostly one level sprawls. Ill do a whole page of stairwell geomorphs soon too. One more gammaworld session at Urchin books then DnD and this might be it. Will use my redbrick tables work for the first levels.

Want to give the old school feel which suits newbs. Also inspired by fighting fantasy books.
Ill go back to complex plots when i have a weekly game of veteran players again. Sandbox fine for now.

So the evil sorcerer has been hidden in his mountain, breeding monsters and recruiting evil minions. Folk were content to let him revel in forbidden lore and madness but of late monsters have been demanding more than chickens. Several homesteaders have vanished and  livestock and children. Till a whole hamlet vanished. Enter the Impirial Dungeoneer Corp led by Prince Fastivius the 23rd in line to the imperial throne. Unusually they comp on top of the dungeon but this time the mountain citadel makes this tactic unworkable. Also flying monsters like gargoyles, stirge owls, bat winged snakes and even a dragon, the wizards steed.

Prince Fastivius has had his men set up camp in the burned out hamlet and surround it with a coral. The corp priests and wizards are an defective deterant. His agents have searched every prison, tavern and whorehouse for adventurers and the party is presented to him. Dubbing them dungeoneer corp auxiliary scouts 3rd class, the party are frog marched right up to the entrance by guards. A priest and a an apprentice are with them for healing and to help classify magic items and choose which ones the prince will take as his share.

The party must return with valuable intelligence (documents not hearsay), used ammo and at least half wounded or face court marshal and execution. The guards and priest will heal adventurers several times and will be replaced withing 8 hours if used up. They will take heavy goods, coins, or anything valuable off poor burdoned adventurers. When its level up time the party will be marched back to the hamlet and allowed to have a beer. Now the hamlet has a stockade, trenches and catapults and even more troops.

If party cries lots they may be put on clean up detail with some peasant labor looking for stuff missed by proper adventurers. Fancy aristocrats looking for fame may arrive and be given privelaged dungeon looting rights for certain level making some conflict. The party may be sent to rescue some fops who will then steal all the glory and loot. Possibly some noble will bring a wife or daughter who will be kidnapped by hobgoblins and taken to the citadel. Perhaps a player could find true love to have the wizard's dragon fly of with them. Eventually the party level will earn them respect. By 4th they should be treated as non-scum by nobles and will earn own rights and keep treasures.

Possibly money looted here will be sent to home war effort but some may be to hire mercenaries and improve hamlet fortifications. When the sorcerer and his followers are killed the property may be made available. Very luck heroes may get to meet bluebloods and dine with them.
Posted by Konsumterra at Wednesday, March 06, 2013