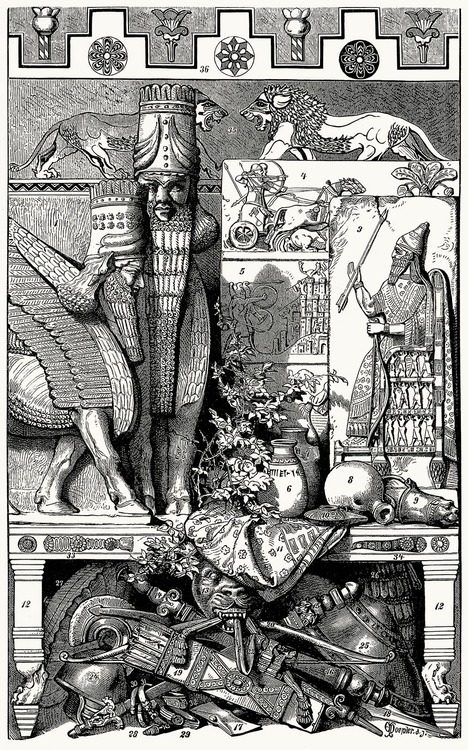 Ive finally getting hang of G+ a bit and so ill reserve my gamer philosophy snippets to G+ FB and some other sites. While Im not as ill as I was when I was writing a few thousand words a day readers here seem to find plenty of my old posts to explore and I get healthy daily hits without posting daily. My own games have been stalled most of the new year so I have been entering contests/group projects because my own designs are fairly ahead of my needs.

"The Earth is degenerating today. Bribery and corruption abound. Children no longer obey their parents,
every man wants to write a book, and it is evident that the end of the world is fast approaching."
- Assyrian Tablet, c.2800 BC

Confucius and Plato made some similar comments. And I will make a few classical Greek roman comparisons as most readers more comforable with them. I personally find it amazing that the west can invade somewhere and not teach its history and most persons know nothing about the places we invade or the failures and successes of past invaders. Just sayin.

I first got into near eastern myths when doing classics at uni because I as a good contrary always had to read some other view of whatever I studied. I always enjoyed the myths because they share symbols and memes with other myths enough to be familiar at times but then do something totally bonkers to remind you of a surprisingly different world. The myths of a literate urbanized people have some things in common with the present than even Greece or Rome.

Egypt was never a threat and it was safe in ancient times to romanticize them. This has not ever stopped. Look in your museum gift shops and libraries. Persia outlasted rome and greece yet not many penguin classics despite length of literate civilization.  Apparently German is good if you want to read Persian.

There is so much great real world info on using history as well. Maps of ruins, historical maps, war gamer armies, documents of all sorts. Cheaper than buying gamer books plus you learn something about the real world. we have calenders, astrology, weights an measures, laws, spells, monsters (many familiar), personal letters, receipts, statues and more.

Ten reasons to consider a campaign in Ancient Mesopotaimia:

1 Maps of ruins and images of cities are easily available. ruins and mounds everywhere

2 Art and text on gods including prayers and myths are easily available.

4 Art and text on monsters, demons and creatures are easily available.

7 Many gods and monsters are quite familiar from Egyptian and Greek and even Hindu ones.

10 Akkadian was dominant international commerce language for almost 2000 years so it makes a pretty good common toungue with Sumerian as its older scholar and religious tongue. Weights and measures were a part of this. The melammu was a system of taxonomic lists of animals and plants and things used as a kind of encyclopedia, school curriculum, library catalogue and of occult significance to boot.

Some books I recommend include Heroditus - a good bridge between ancient near east to Alexander to Athens. A tourist guide for Europe, Mediterranean and near east about 300 BC. Gore Vidal's Creation is awesome book - a bit late the for the period I liked but goes well with Herodotus. A grandson of Zoroaster the persian propher travels and meets Lao Tsu, Confucius, Buddah and some other historical persons as a Persian Ambassador. The Assyrian by Nicholas Guild is awesome book - i knew the real history, skipped to the end, and still had no idea how things would get there. I'd love to find the sequel affordably - e-reader version was so badly converted was pulled from sale. Awesome writer - what happened to him? Actually Id rate these among my favorite books ever.

Sidebar of this blog has link to very good mythology FAQ
http://home.comcast.net/~chris.s/assyrbabyl-faq.html

Older works from around 1900 are seriosly dated and translations ahave improved incradibly. These are the sources Stechkin used for his loony Von Daniken style crap. He misreads and mistranslates material that is hopelessly dated. But some people might like this. Actually I'd warn you to be wary of some Judaic-Christian takes on ancient Mesopotamia as they are just using it to prove their own points. Sumeria and early Egypt predate any evidence of Semites existing in near east and did not build pyramids. I do have a two volume book of religious text for christian scholars which ill talk about later that has just unadulterated texts (but a bit dated). Most of newstand archeology magazines are actually christian and out to prove an agenda too.

Have been a few RPG products - id like to write a BRP or GURPS 3rd ed style sourcebook. Testament RPG was a bit bibliocentric to me and not really that interesting. Ancient Kingdoms:Mesopotamia by necromancer games for Swords and Sorcery is a great product and best in English to date. Good adventure ideas. Old deities and demigods isn't too bad a source even. Spanish game Puerta de Ishtar has awesome art and a great fantasy version of Mesopotaimia with alchemic state created monsters. I wish I knew more and that an english version would come out. The writer Rodrigo (sorry had your name wrong b4 bro) is a nice enough fellow. I reviewed the Drive thru RPG available art only pack I got at his recommendation which was pretty good a while back.

I will mention some other must reads some other time. There is a multi volume encyclopedia or orientalism with essays of incredible specificness like humour, dental hygiene and more. I wish I'd stolen a copy but a dozen huge volumes about 4 kilos each and my honesty prevented me. I mean to make an online collection of all the clip art Ive gathered some day but unsure where. Could make a sister blog or post here bit by bit.

Ostriches are demon birds and art depicts them being killed by heroes. Centaurs, sphinxes, griffons, satyrs, hydras and other monsters are all mentioned in texts long before greece.

Monsters are not really natural creatures - I like Babylonian take - monsters are the bitter venom of the gods here to punish, persecute and prey on humanity. Demons punish the wicked on behalf of gods, but some rebel demons and monsters and giants fight the gods. Gods may disagree and have contrary purposes too. They exist to test us. Smarterer magical monsters are part of a celestial bureaucracy. Gold is valuable in heaven and the underworld. Gods and demons accept gold as sacrifices and payment. In short gold standard is divine and universal. In fact the laws set by Humarabi set fines which over a thousand years of inflation made it cheaper and cheaper for the rich to kill the poor.

(one well known blogger was so irritated by me saying this elsewhere, deduced my players must hate my games, my campaign sucks and i am a homosexual prostitute from this and abused me for not believing in applying gritty economics - sorry but im in the mythic realism camp - second worse troll ive met on net since i got on in 1989).

Akkadian Empire of Sargon. First empire builder and pantheon and language maker for the empire. Mass use of archers in battle. 2300 bc

Babylonian Empire of Hammurabi famous lawmaker. Marduk is now lord of the universe 1890 bc

Assyrian Empire of King of Sennacherib - siege weapons render walls useless, iron and advanced armour 705 bc and the twilight of these cultures

I will produce some more usable player content in future. I managed to play two groups for about 4 years playing this.


Previous posts on this:

My RQ stuff on this
http://elfmaidsandoctopi.blogspot.com.au/2012/10/babylon-and-on-rq.html

My DnD on this
http://elfmaidsandoctopi.blogspot.com.au/2012/10/babylonian-gods-for-elfmaids-and-octopi.html