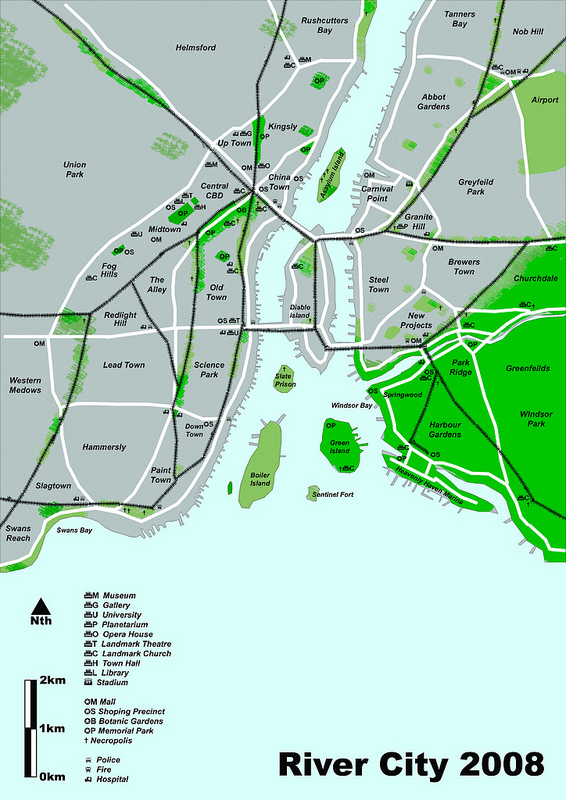 Also i worked with the artist for EMO cover artist as comic worker in his studio in the glamorous international comic world - well its fringes. Comic crash in early 90s meant pinup stuff more of a go then, but Michal's stuff here http://www.michaldutkiewicz.com/blog/news/

River city was my second marvel campagn. My last game I ran in Adelaide before hitting Sydney and going pro as a artist. Wasnt my intention here but earned living in street art art and grafitti, mostly arts education.

River city was a fictional city to escape using hometown setting (which i ended up doing in real world). It has a brief alternative history. Green stuff on map for older richer treefilled suburbs vs grey  industrial natureless industrial slums warrens.

Early in the colonial area the are between Adelaide and Melbourne, business men out to escape sanctioned state control set up a town. Was used for many questionable industries from early times as area first settled by sealers and whalers who were practicing slavery and racist exterminations.  Hellfire Clubbers from the motherland, occultists, oriental cults, drug dens, vampires, pirates, witches, bush-rangers frequented the rogue colony. Equally strange doo gooders appeared from early times. By 1860 the blight was a small independent territory governed by its own governor. Through bribes and bullying this continued till the states and territories federated.

Mt Gambier a mysterious volcaninc blu lake town is an interesting fearture inland. Aboriginal art records the last eruptions 20000 years ago and megafauna sightings. Creatures are reported occasionally still. Marshland Aboriginal were displaced by farmers and most are resentful and dwell on constantly whittled away "useless land". Many ended up in the city. Coastal tribes remained large and one Aboriginal inventor from the area appears on the Australian currency.

Instead of draining the swamps as the states wanted the water was engineering into huge concrete canal romantically called a river. Islands were part of the engineering like coastal fortifications. Great swamps and lush now very English looking farmland (angloformed) surround the city .

Crime was very influential after WW1 with lapse drug laws and mad miracle formulas and illegal boozer riled the city. As did mad hopped up vigilantes and bizarre gangsters. In WW2 many turned patriotic and the government built arms factories and search labs.

Post war River City boomed and the gangsters became respectable statesmen and business owners. Many heroes retired from crime fighting but lived as celebrities and virtual royalty in some cases. Other never stopped fighting or stayed hidden. Then disasters strack. Shonky mass poisonings of the population and especially among the poor on diablo island resulted in mutations and freaks, some who still dwell in the sewers. Other industrial accidents and a generation of lead poisoned unemployable criminals emerged. An experimental micripile alleviated the pollution fog a bit in the 60s but a new generation of occultists, superheroes and mystery men emerged.

In the 70s most of the asylum Islands other functions ceased and the island became a hangout for cults and gangs. Various times has been a orphan work house and childrens home and madhouse and quarantine station and immigration detention center.

Green Island is a tiny garden Ise off limits and home of some endangered birds and some Tasmanian Tigers.

Sentinel fort built where a pirate ship was wrecked in earlier explorer times. Refited to keep out the Yanks and the Russians and the Germans and the Dutch and rest of Australia if need be. Gets refitted every new popular crisis. Off limits, possible anti terrorism and state metahuman base.

Diablo Island is a slumb that both political parties are trying to manipulate and re develop. A Warren of illegal worker accommodation amid factories and work houses. The residents have rioted several times, most violent in the country. Many deformed disabled and disfigured residence.

Slate prison is where the most dangerous prisoners are kept. Well other than the secret prisons the spooks at APIO keep somewhere. They keep all the powered freaks and black tech users and aliens and other paranormal matters of national interest.

The city has terrible rail, trams, tunnels bridges and over the top buildings from many areas except if you look close its often poorly done ans a bit shabby. Gangs, squats and ruins are common. When it rains mutants, crocs and swarms of poisonous cane toads swarm from the river and drains.

Pop: 3.1 Million. Mostly English, welsh, Germans westside and Irish Scottish English originally but post both world wars eastern European, Poles, Czechoslovakia, Russians, Balts, Mediterraneans, and all sorts of emigres in the name of liberty and crime. Scientists and artists flock to the city for cheap rent and lax government. Other cities send unwanted metahumans and paranormals here. Many New Zealanders many of Maori decent live in the city. In the early 90s several satelite farm towns of nepalese were settled in the thousands. Many were demobbed gurkas. Many work in police and public transport and military. China town has been here since the begining when Chinease would land here to avoid states that forbid them in gold rush and bush ranger days. Little Korea and Vietnam and Indonesia are nearby but more recent and smaller.

When you get into city keep away from clown gangsters dont let them ever see your money.

I'll do some district blowups and encounters sometime.
Posted by Konsumterra at Wednesday, March 13, 2013