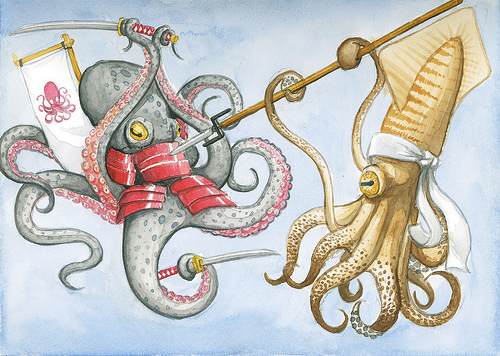 First major revision of my own stuff. Made to fit in better with other classes and fit same layout. They are my worlds gonzo race and namesake of the Elfmaids and Octopi (EMO rules). My artist still working, just gone back to pencil, given up on huge expensive tablet/monitor thing.

Reading white dwarf 1-100 in the rpg era was fascinating (up to issue 68). Was from a culture where everyone stole and borrowed from every system as product was scarce and White Dwarf was head of this style. Also 1-3 page dungeon design and great maps. I note some have grid outside the corridors and rooms and in the rock or walls instead interesting. Like 2000AD comics, UK style was gritty and funny and very different tone to US stuff. Oz got best of both to pick. I think i got fiend folio before MM was the art which reminded me of fighting fantasy. Actually some of my fave oldschool art in this book. As I wondered a while back - imagine Earth 2396 where TSR-GW merged. Livingston and Gygax! Found ad where man seems to be having sex with ratman from behind. Tail wrapping round his leg makes it worse. We were so innocent back then.

Health better, working more, imagination and free time not so good. My proliferation ive had for 4 months has been by being bed ridden, So my frequency will drop for a while.

I need some text editors - I'm dyslexic basically and sometimes vowel blind and differences in english english, american english, canadian english, and australian english confound me a bit. Im inclined to go with American as 75% of my readers are. So im looking for 2-3 people to proof a 36ish page doc for me. I can offer credit, and a hardcopy and several copies of pdf. Will be some other nick knacks like stickers possibly. So I need proofing for American English, clarity, brevity and making system nuetral (my monsters all self explanatory or according to wikapedia folklore entries). If it was in MERP, Palladium, GURPS, RQ and DnD its fair game. I need to finish Red Brick Dungeon Zone table book so I can get going on Gothic volume.

Currently thinking of releasing basic version of EMO rules as free pdf from this site compiling my rules and actually with spell and proficiency system so it actually all works and makes sense. Save my more bonkers and specific stuff for later.

Possible may do the kobold goblin hobgoblin bugbear sometime as classes
liking the roman kobolds as more mischievous, somewhat amusing and  constantly aroused
liking the common folk tread of hobgoblins being shape shifters

Orcs trouble me slightly but i like overlapping them with roman cyclops men who battle griffons and smith weapons for gods.
..
Tako
Octopus faerie folk of the sea

Spells: Any
NWP: Any
Shield: Any but large
Armour: Any
Weapon: Any
Fight as: Warrior
Save as: Priest

Tako are a race of aquatic faerie land folk who compete with mermaids, sea spirit folk, fish spirits, kelp spirits, evil fish men, shark men and a whole ecology of viscous marine life. Tako are very ancient and feel spined ones are upstarts. They live pretty much like surface folk in villages, planting kelp and herding fish. Most live humble lives. Some are from noble warrior clans and act as mercenaries in the sea kingdoms. Others act as wizard apprentices or side kicks to naiads or sea hags because they love arcane secrets of any type. A few serve the gods or become criminals or adpt other persuations much like a human. They are mentally flexible and learn any skills or magic type.  Occasionally some would get drunk and go to the surface to seduce fishermens wives which has earned them a bad rep among moralists and fisher folk. Tako have been cumming to the surface since before man and some are now returning for adventure or as refugees from some tragedy in a distant Tako empire. Only live to about 40, some last 60 which is short for faerie folk so they often seek life extension or reincarnating powers. Motivates some to piety or considering afterlife more than humans. The have a spoken and written and non verbal language with colour change and body language. like to use own ink when writing libraries have a dry chamber to scribe book which is then made water proof. They dont raise children, they sort of tolerate them following and copying them and eating their scraps. Some baby tako follow a wizard or other magical creature and become servants till they surpass or out live their "parent". Some sell their impressionable infants as servants. Under 1ft only use one hand, 2 foot 2 hands, 3foot ro use 3 hands for zero level kids.

-Tako have 8 limbs, 4 are used for walking, for hands four feet,
-On males one is his reproductive organ which at lv5 can detach find a mate on its own
-These limbs regenerate if cut off and are very tasty, week to grow tip, month for whole tentacle, they continue to move for some time if cut off, grabbing anything
-All tako can use all 4 hands for a variety of actions. Could hold  4 sabres. Or two 2-H swords. Or two swords and 2 shields. Or sword, shield, throwing axe and flintlock pistol. Two Short Bows. Initialy cannot mix hands with melee misile and spells but can later
-At 3rd lv a tako can mix melee and missile attacks between hands
-At 6th lv a tako can cast with one set of two hands (with mouth if verbal components needed) and fight with other two if they save vs distraction if fighting, includes operating magic items
-At 10th they no longer need to use save to use spell and melee or missile attack
-Colour changing chameleon skin, actually can be used for non verbal language among them. Colour indicates mood in many cases. Tend to adapt to local area. good for +4 hide or camouflage if not wearing clothes or armour
-Non-verbal language is free to all tako, others may read it but not "speak" it
-All Tako have brawling proficiency - reading writing and wrestling are school subjects
-No prone position, can’t be tripped or affected by being knocked over, but can be pushed back
-Defends sides as well as front facing (only immediately behind counts against them)
-If scared squirt ink cloud once per day base range 3/Lv radius, nothing visible for 1d4 rounds, they
-1d6 less falling damage due to being squishy inside and spineless
-They move 9 on land or 12 in water – all can swim as proficient and breath water, horses hate them
-Tako cast spells and can choose a list but they progress like elves and bards starting with 4 cantrips at first level

Squid Pirate
Enemies of Tako with 8 foot tentacles and only two arms that give melee attacks long reach. They dont cast spells and have 1d10 HD instead.

Amonite Sea Lord
These ancient ones have +4 armour from a shell, 1d4 HD and spell progression as a human wizard, camouflage is inferior only +2 hide

Dweller in Darkness
These can glow and become luminous at will and can see in darkness but they dislike sunlight and get -2 to fight under the sun, they have pointy teeth and a flesh cowl-cape. They are more inclined to evil having been driven mad by loneliness in the depths. Another related type is albino and dwells in caves instead

Specialist Tako Castes
These are typical careers for Tako