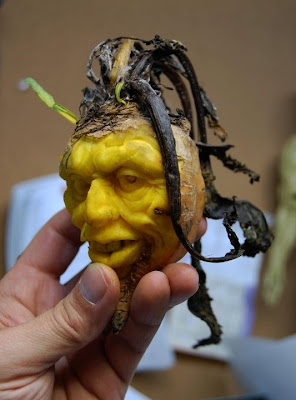 Bogrump the turnip lord, was carried from lands far away. His holy flesh sustains beasts over winter, making it unnecessary to slaughter most live stock before winter. This frees labour time and increases local wealth, giving men more time and money to spend at war. Bogrump is a hideous swollen faced humanoid, often embodied in a scare crow with a carved turnip head. He stalks and ambushes the unworthy, especially at night (Surprise 1-4 daylight, 1-5 night).

This petty god strikes with a crude wooden sword for 4d6 damage but he will attack loners by strangulation with 19 strength inflicting the same damage. He may also turn 3d10 turnips in a field into his turnip sprite servitors - turnip headed goblins to aid him once a day. He heals one HP for every turnip he eats and can eat 1d6 per round if in a heap or one if he has to dig them up.

Bogrump may bless a turnip field to be 10% more fruitful or to make turnip full cellar last a season weevil and worm and rot free.  Sometimes a maiden is married to a scarecrow of Bogrump and the  lucky couple spend a night in the barn alone. A virtuous humble maiden who pleases Bogrump  has healthy trouble free childbirth for ever more and produces large healthy (slightly lumpy) twins three months after the marriage. Vain or egotistical maidens are blessed with a swollen purple turnip like face and the other birthing benefits. Maidens are free to marry any of their choosing after Bogrump has had his turn. He may avenge these maidens if they are harmed.

Stories tell of his giant turnip house and his various clumsy and moronic turnip headed servants. Some tell of him keeping spare heads in brine with different personalities and various comedic head swapping antics. Most stories are funny and some are downright scary. Telling stories over turnip soup or wine or mash is his preferred worship. He includes pumpkin, squash, swedes, carrots and others as his kin.

this is for a petty gods contest at gorgonmilk
http://gorgonmilk.blogspot.com.au/2013/03/petty-gods-open-for-submissions.html
Posted by Konsumterra at Monday, March 18, 2013