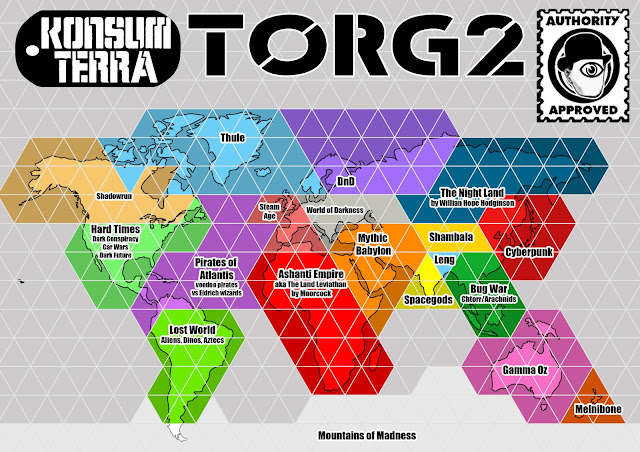 I may have original TORG invader worlds attempt to re- invade and even help core earth
I also forgot Carcosa so that can be invading Australia too
Would be funny to have Warhammer/40k chaos and space troops appear everywhere
and some super heroes invade too - New York!

Thule
Frozen land where Giant and troll armies assemble in the magical glacier ciradel of the Frost Giants king and god. Lots of vikings. Some areas settled with fairy tale villages.

Pirates of Atlantis
Voodoo priests, gods and zombies with carribean pirates and city of ancient evil Clark Ashton Smith type evil sorcerers and occasional prehuman elder races. Artist who did ghost in shell did some (adult) art like this.

Shambala
Hidden underground kingdom of psionics, mystics and wonder workers here to save world with enlightenment.

Leng
A frozen plateau linked to dreamlands, inhabited by evil subhuman and inhuman hybrids who serve cults of the old ones. Spread unspeakable evil

Mountains of Madness
Old ones and the shoggoths and deep ones are arising, ancient sunken cities are sunlit again.
Posted by Konsumterra at Monday, March 18, 2013