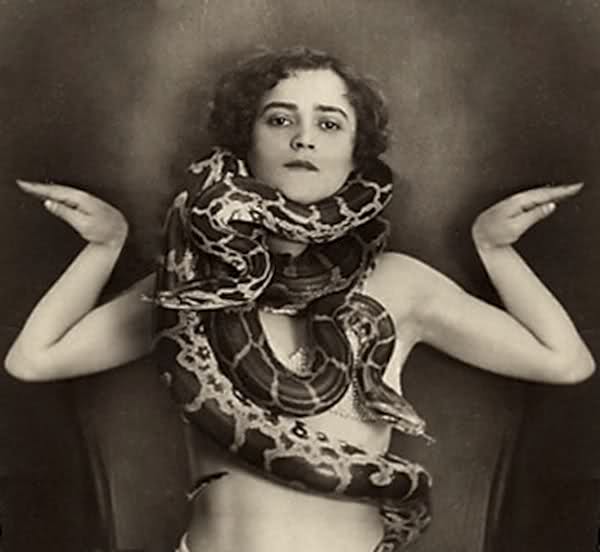 this is for a petty gods contest at gorgonmilk - a lack of non nature godesses reported
http://gorgonmilk.blogspot.com.au/2013/03/petty-gods-open-for-submissions.htmlThe first is a scary fairy tale granny and the other is meant to be inspired by Moorcock and Greek mystery cults. A good cult for Amazon Invaders. Did consider axe instead of sword but inert your personal weapon choice. Sickle might be fun.

*Note - dont have bx set to calculate xp sorry so changing it to be in line would be appreciated, a little shaky on treasure classes, movement but hope you get the point. Arioch bless editors.

Ginny White eye is a gleeful hag with a local folk hat, tattered dress, stripey stockings and big long boots. She rides her kettle through they sky knocking over chimneys of selfish people or defecating down the chimney into mean peoples cauldrons. She also steals they're clogs, or just fills them with excrement. Ginny also throws dung at foul mouthed trouble makers from out of town. She is adept at swooping in to attack without being seen (surprise 1-3 out doors when flying ambush).

If her victims fight back or are defended or take out their frustration on innocents, she attacks. Her rolling pin will stun a foe for 1d4 rounds if they resist a paralyses save. Her sheers cause wounds that lose 1pt blood loss per round damage until magically healed or treated by an expert healer. Her clog blows cause the victim to lose 1d4 intelligence points per blow, the points are regained one per day. If knocked to zero the victim forgets to breathe and dies.

Vindictive old women (not necessarily witches even if they have a few too many cats), call apon her when selfish persons have brought suffering or trouble makers come into town and harm locals. They write the names of the evil doers (the strangers is good enough for Ginny) on leaves and burn them in their fire place with some hog whiskers and a hedgehog quill. Village women meet yearly and send her to bother who they deem the most selfish villager of the year on a local festival.

Amber Blood Sword is savage maid naked with a fur cape and long animated red hair. Her skin is amber tinted milky white and her eyes are brilliant gold amber spheres. She looks angry and enraged mostly. Any woman (friend or foe) within 240 feet (unwilling may save to resist as a charm) becomes berserk. Effected women get a +2 to hit and damage when she is present and will not stop killing till all males in the area seem dead. She never ambushes or surprises anybody and appears to make hostile animalistic grunts at her victims first. She is a vindictive bestial creature without language and not swayed by charm from any man by word or spell.

Once she appears on a battlefield she and any women effected by her engagement field go on a killing spree. Any males must flee or play dead or be attacked. Any men hit by her ever bleeding amber sword are sterilized till treated by remove disease magic. She fights to the death happily as one of her thousands of sisters will gain her powers and knowledge and sword the next full solstice after her death. She and women influenced by her will attack male virgins last. Her magic field and violence does not include non adult minors under 13.

When menfolk are away being vikings, crusaders or pirates, women folk may call up Amber Blood Sword when enemies attack. More frightening is Amazons deliberately calling her in an invasion. Chaotic cults have called on her to start bloody riots and Lawful ones used her to punish evil doers. Without victims to kill, her field effected are engulfed in ecstatic energy which ends grief, shame and despair. Sometimes this effect is used in women only rituals best not spied on by prying men. The ecstatic cult form is a popular form in civilized lands where the cult keep private land and a grotto. Calling her requires at least a hundred initiated wailing women of any age with a medallion all night. Usually a summoning every solstice season or yearly.
Posted by Konsumterra at Friday, March 22, 2013