Time of the Frog Lords

Frog folk are a hard done by lot but they remember the primordial moist darkness when they were the first beings to sing. Remnants of their kingdoms and glory were forgotten before humans were brand new. Some humans have found favour of the frog lords and call on them still. 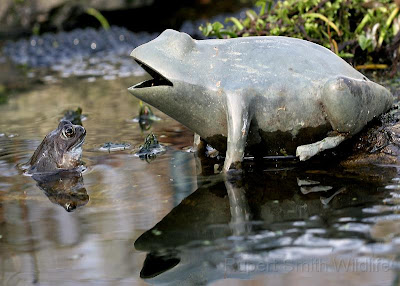 Here is a batrachian benevolent trinity

but when you call on the frog lords, you best be ready to rock!
http://gorgonmilk.blogspot.com.au/2013/03/petty-gods-open-for-submissions.html

Bugs and grubs for the frog gods!

Grandpa Toadflap is a testy, grumpy incredibly ancient toad the size of an Ox. He loves coins and treasure and loves to sit on his celestial stash pile hidden in a dawn age sunken palace.  He lairs in pits and cannot be surprised and can even burrow backwards. He may attack any near his sacred pit if he thinks they wants his loot. He surprises on 1-3 if hidden under dirt or water.

If he bites and hits he gets to hold a target with 19 strength in one limb. Then if he rolls a second hit he swallows the victim who takes 3d6 per round until dead then disolved. He may also use his hands on a bitten foe and make two more hit rolls if not swallowed to grab and hold two more limbs.

Grandpa Toadflap is called to our time by an earnest commoner collecting a stash of coins and up to 40lb of worms in a pit, then sob and weep for the attention of the god. After a mighty nights frog chorus, he comes and may lurk in the pit for a few weeks. Villagers may use him to stump troublesome monsters and enemies by placing pit on a path on near animal stalls. Grandpa will happily eat his HD in beings then take his new horde home.

Grandpa Toadflap may grant wisdom of the primordial ones who remember proto historic secrets of early creation. He is crotchety and may wander off topic. Best feed him so he doesnt get hungry watching twitching tempting meat people like humans. Swamp folk, old misers, farmers and poor and desperate people call apon him. If Insincere people summon him they are cursed to be compelled to vomit 4lb of toad spawn in a nice damp spot every day for life.

Johnny Hopper is a wily frog dandy, a lover, musician, adventurer and trickster. He is well dressed, likes fancy things and treats belonging to his betters. He likes to sing and plays any instrument and be jolly which also offends others. He often woos princesses from shadows or tells them he is a cursed prince. He sometimes steals a polymorphing scroll to turn ladies into frog folk. He has unfortunately left many slightly froggy children in many lands among the rich.

He has abilities of a 16th level thief. Prefers snatch and grab or steal a kiss to fighting, but a skilled warrior. Commoners sing songs of Jonny and swear to never eat or harm bactracian unless in self defense (atonement then needed for sin). Jonny lampoons the rich and takes their shiny things and ladies virtue. The common folk get a laugh and Jonny gets fun.

The wart mother curses her enemies with warts which make them appear hideous and slow their movement. Each blast of her arcane breath causes some damage from spasmodic rupturing flesh, and makes victim lose 1 Cha and slows movement by 10. This effect is cumulative and at 0 Charisma the victim causes fear in under 2HD beings in 20ft. At 0 movement the victim is a pillar of fused solid wart and can no longer walk. This effect can be cured by remove curse and Cure Disease.

Hedge witches and oppressed common folk call on the dark toad mother to curse their enemies. If all villagers in community nurse and care for a large 1d6lb toad as a baby for a month then direct their hatred and spite at an oppressor can call her. She is a cow sized metallic chrome purple frog with brilliant turquoise eyes. An angry mob may follow her with torches and oil to finish those she weakens

*Note - dont have bx set to calculate xp sorry so changing it to be in line would be appreciated
a little shaky on treasure classes, movement but hope you get the point 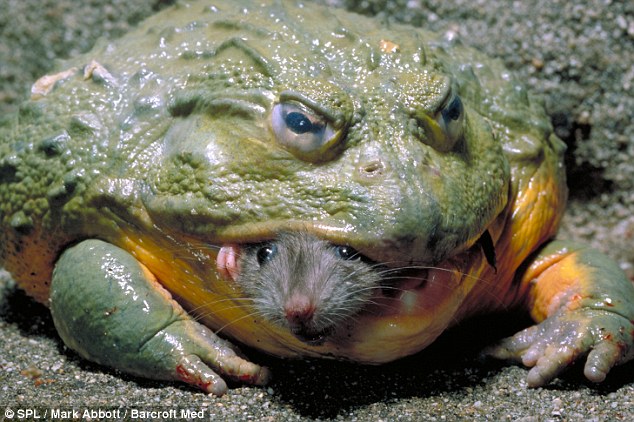