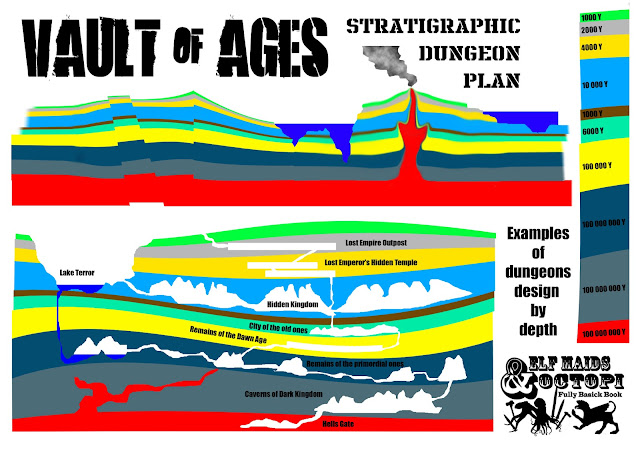 Lake Terror
This lake has worn through many layers and surrounded by harsh cliffs. It is connected to giant flooded undersea below and monsters from the aquatic dark depths abound. Locals dread the lake.

Empire Outpost
A thousand years ago the empire built a hillfort with an underground storage facility. The Hillfort was abandoned and a small garrison remained, forgotten by the empire. Eventualy they joined local village populations and a tribe of cyclops-orcs occupied the level.

Lost Emperors hidden temple
During a savage succesion war an emperor fled the empire and ocupied the outpost for a time. He dug a deeper palace and temple to live out his days. Better built and more artistic but sealed and forgotten. Devolved Subterranean like Morlocks and troglodytes battle over control of the upper temple and undead occupy the lower level. Emperors brought wealth and magic here which has remained unseen since. Some say his mummy rests here with his concubines and guard. Others say he is sleeping or may be resurrected to rule again.

Hidden Kingdom
This is actually three huge caves. The first is occupied by dark elves, the last by dark dwarves and the middle one is a no mans land with hyena men, bugbears and other monsters constantly battling each other. Ruinds of a primordial citadel are contested especially and may be sealed with loot and dark secrets within.

City of the old ones
This alien ruin of green stone has spacial time-space warping effects and hungry shoggoths on the loose. They keep the area barren and free of life. Alien treasures and weird relics have been found here.

Remains of the dawn age
This is the remnants of a dawn age godlings manour, haunted by non coporeal spirits who re-enact their ancient battles daily. Huge crystals are imbedded in the cave walls. Some ancient spirits here have become warped by millennium of darkness and isolation. Some golden servants from the dawn gods or their relics may be found.

Remains of the primordial ones
These five huge caverns are pockets of pre humans servitors from when the world was dark and mostly submerged. Fish men, serpent men, frog men, lizard men and lamprey men each ocupy a cave and ruins from the age of darkness are crumbling everywhere. Fungal forests and waters full of cave fish and lobsters can support many people.

Caverns of Dark Kingdom
This huge cavern was occupied by beings of shadow and darkness but since then other humanoids have settled and built a might ziggarutt then collapsed into barbarism. Albino humans, morlocks, bat folk, spider folk and others battle for supremacy in the ruins.

Hells Gate
A flaming ash covered plain with lava rivers and acid lakes. Salamanders are common and fire giants dwell in ruins built by efreeti while the world was being built.
Posted by Konsumterra at Thursday, March 28, 2013