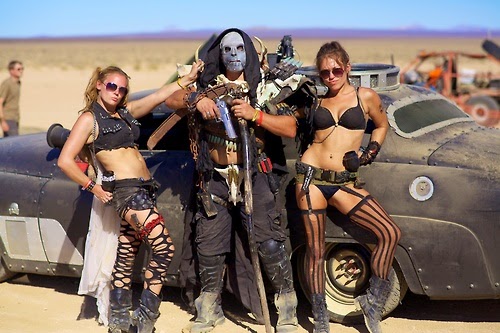 So positioned party to watch the compound of the Josephite cult at bequest of Gentech. Saw huge village of 500 people with gender and children segregated barracks, ag polydomes, a automated factory, mess halls, garage and church.

Made plans for the christian mutie to infiltrate as he knew their bible well. He drove off and got admitted with impressive speech.

Everyone else in camp when saw a elder in a offroad segway come across plain. Bike went out with Karumi and the new kid. She tried her ninja mind reading tricks no success. He agreed to visit camp and they took him there and he offered them work and food. He needed help to fight satanic biker gangs in area. Team entered compound. Josephites liked sheriff in party best and religious mutie. Cyborgs wary of. Offered new kid a wife if he joined and he was keen to become initiate and be baptised. Spoke to other newcommers and checked if under duress. Most happy to be here and saved by cult but a few wary of no way to leave.

Next day cult asked if party would eliminate a biker gang, the Scarlet scalpers. Mutie offered for free and karumi, new kid, sheriff and a crazy german backpack girl in her battle combivan all offered to go to for repairs, ammo fuel and cash. Tried to get into sheriffs bitter secrets but failed.

After lunch team set off to old mining shacks and waited to dark. Warned to spare petrol pump and just kill gang. So as got late and gang drunk team charged. Gang very slow to react and Karumi the ninja girl fired a rocket accidentally igniting petrol pumps. Mutie charged ahead in his ram buggy, knocked over multiple shacks killing inhabitants. Sheriff from behind machine gunned stirring gang members and the crazy backpacker drove into flames, spun out of control and damaged several shacks. Team drove around shacks picking off and running down bikes and bikers on foot. Backpacker girl saw a globe of flying fire follow her and it set rear of her van on fire. Karumi saw it too and sheriff and realized it as unnatural. As combivan stopped driver lept out and went to scoop up sand with her hat to throw on fire. The fire being was inside torching interior. New kid managed to hit combi and almost hit mutie in confusion. Sherrif drove up and grabbed fire extinguisher as only team member with one. Mutie arrived on scene and grabbed a 30 litre water tank in car. Mutie and backpacker put out fire but then the fire being poured out angrily. Sheriff hosed it down killing it.

Watched town burn and took prisoners. Looted some bikes and mutie scalped wounded gang members to decorate his car ram plate. Prisoners told how josephites threatened them to join or die. Mentioned another gang in nearby town vanished.

So by lunch found town, a crossroad with pub, police station, garage and church. Huge pits had swallowed some buildings and a huge crack in ground had split town. Karumi sensed oddness and looked about sensing something underground of a psychic nature. Sherrif looked through police building, formerly used by gang and found no bodies or clues.

So Karumi, Mutie and new kid went down a pit. Followed tunnel complex and found slime deposits. Karumi sensed others were under influence of force and followed them. A huge hideous Cthonian land squid beast was waiting in it's nest hungrily drawing human in. Mutie flipped and began breathing flame sizzling beings skin. New kid emptied his assault rifle and and Karumi slashed it with her vibro monoblade katana. Kept it up till being dead but new kid crushed into nothing under the massive beast. She filmed it and cut off a tentacle for a specimen for her corporate masters. Found 4 stone calling mentally for help. She sensed other beings responding. On surface she called company and they said hide eggs in cult compound but one then flee to Sydney without stopping if possible.

In compound party got repairs and ammo and cash and hid eggs one in septic tank died with a fizz. Two others fine and party went top speed back home. On way saved old triffid farmer being chased by plants and he offered then to visit his farm if they ever need a get away. Slaughtered several gangs easily. In Sydney Gntech lab guys flew egg to oil rig lab. Saw footage of cthonians arising under Josephite town killing and enthralling people until the filming drone fired 6 hellfire missiles laying men and monsters to ash.

All pleased and rested a few days in gentech labs.

Got a hundred lil train scale people to run over with toy cars which added lots of fun. I have got some tanks, fighters and other interesting trucks. Will get a set at club set up and one for me. Making roads all week after work for con game. DnD this tuesday then 3 days gm-ing this weekend.
Posted by Konsumterra at Sunday, September 28, 2014