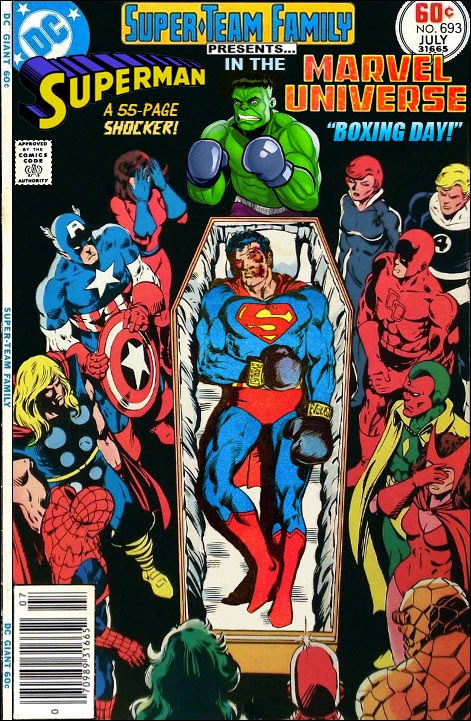 Seraphim a mild mannered priest is really a angel cone to help mortals with powers of light, healing and righteous fists of peace. Has wings and golden armour he can summon

Storm Wing a airline company owner given telekinesis and a suit by aliens. Just returned from secretly having a baby with a alternate universe in human form. Her brother/sidekick is a nanny.

Traveller a other dimensional detective trapped on earth 476. Has a base, a car that turns into a flying saucer as well as power of psychometry, teleportation, self duplication and has a disintegration gun that forms from his body. Wears bandages and trench coat and fedora.

Stormlord a jerk who is actually from a hundred year old dynasty of heroes, the 5th in a family line with a alien suit, secret base, powers over weather and forms ice armour

Tank a millionare arms dealer in battlesuit industry really learned secrets from lemurians under the earth from their king. Has power to transmute matter from simple elements like carbon and hydrogen. Has lemurian cyborgs and his own cyborg armour.

Have had a policy of trying to throw gonzo scenarios at party between city smash ups. Most sessions involved a long battle scene with heroclix and toy cars. Had a big prison break. Intergalactic gladiator fight, and most recently a battle with a very tough meta merc team trying to rob high energy physics hardware. Two escaped and almost got away with truck.

So while tracking more parts Traveller traced to a shack in country near a run down old mill. So called available team and all flew to scene. Saw three guards with ingrams that Traveller scanned to determined ammo was AP and shed was really a elevator. Stormlord went off half cocked and laid down a wall of Ice. Seraphim flew up and punched one through door and got a KO. Traveler teleported one gy in front of seraphuim and removed a few guns. Stormlord blew away all the chamo on the building exposing the elevator and Tank held doors open while Stormwing flew through into depths after tearing out liftt floor. Voice taunted them over speakers threatening they would never even be born soon.

Whole team considered putting storm in names for a moment till they found the bunker beneath full of nazi regalia dating from pre ww2. In main room was gate. Traveller could tell it was a gate and probably a time one. APIO squads arrived to secure and party decided to enter. Traveller explained that villain erroneously believed you could enter own parallel time stream. Party found selves 1939. Took down 3 Nazi guards with MP3's who were easy to stop. Scientist on way to River city.

Followed him after checking radio broadcasts to see if history similar. City smaller, dirtier, military bases all still active on tiny harbour islands. Seraphim took them to his church and showed priest their he was a angel. Most stayed pu bickering if they could get a disguise and risk showing faces to each other. Stormlord went to family property where his ancestral base was and found butler and his young grandpa threatening him with Thompson guns. Apparently his dad (Stormlord II) was in Europe after refusing Nazi's to join them in 1937. He proved who he was by intimate family knowledge of secrets. Enjoyed having bossy grandpa being helpful and subservient. Got family limo and rented a truck and met at church.

Tank refused to exit armour and worked out Stormlord was able to recharge him with lightning. He also flew into near orbit to test his life support cybernetics. Traveller went to town hall to check business name he gleaned from Nazi guards on farm. Found former Bavarian beer hall now a workers club. Took party there and while Tank sat in back of truck. As rest tried to talk way in, Stormlord jumped out of limo in SS uniform (his alien suit has quick change) and blew everything. Freaked Nazi agents out so others rushed him in with club men tiring to question him and abuse him. While others tried to save situation, facepalmed and abused Stormlord with Nazi's he let off a lightning bolt frying one. So Stormwing held doors shut and lifted a few till they surrender and fight over. She hoped nobody though Stormlord related.

Found scientist they were after was on way to Sydney by train and then was to be smuggled to Berlin. Party scrambled and flew after as scientist more than 3 hours ahead.

Some went in truck driven by traveller and the Storm guys with best flight speeds followed radios. Found intercept point and created huge fog bank to slow train and boarded. Traveller teleported on board and left a duplicate to drive truck. At they walked along train Tank up front saw another battlesuit, only clunky riveted one with exhaust pipes and followed by more ubermench!

He stepped up and said "nice suit" as he disintegrated a hole in chest plate to reveal old man in WW1 uniform (Panzer Kaiser). Was scared to hurt guy. Others flew in a pincer movement to take shots at  other Nazi's. One was a huge obese operatic Valkyrie with spears, shield and sword (Aryan Maiden). Next a man with a skintight uniform with a rune on the front and two mausers (Fenris - a werewold) who detected as powerless to Traveller who reported this and went into train to catch rogue scientist. The last was in jodpurs, a flying jacket and a helmet with a spike on top like a WW1 helmet. He registered as powered by his steel truncheon was more so (Steel Commander).

So Stormlord and stormwing fired bolts at Nazis missing due to speed and fog and range then moved in with more success. The guy with  mausers shot both which impressed everyone. Seraphim ran up and got a punch in and the Panzer Kaiser fired his 40mm cannon arm and missed. Aryan Maiden threw spears at Stormlord calling him a coward traitor and believing he was his great grandpa. Steel commander tumbled over them all onto Panzers's head and whacked Tank on the head. He was a bit surprised but kept eyes on the game and formed carbon in the Panzer's gun barrel. Next the arm exploded scattering everyone and knocking Steel Commander and Panzer off train and buffeting the Seraphim and injuring everyone. Train on fire.

Traveller tried to cuff scientist who shot him with Lauger. Everyone wondered why train not slowing into bend and Angel flew up to investigate to find engineers shot and bleeding. Aryan Maiden spent here spears denting Stormlords Ice armour and he managed to fry her a bit. Stormwing pulled pin on carriages and used her concussion field to injure most of the bad guys. Tank put out train fire by forming inert gas.

The guy with guns turned into werewolf (symbol was rune of werewolf corp) which kind of upset everyone. He was a menace and went for Tank. While he tackled him Panzer returned with boot jets and Steel Comander sprung back. Valkyrie managed a shield bash on Stormwing but she got whittled down to point she wanted to flee buy Stormlord and Stormwing.

Meanwhile Seraphim healed engineers who slowed train saving it and Traveller telepoted the scientist to the truck driven by his quantum clone. Tank grabbed the werewolf and beat the Panzer Kaizer knocking him off again. This time he crawled from suit and ran. Steel commander fell next and was knocked out by bad fall. When out of sight his magic truncheon healed him and he escaped. Aryan maiden got a KO sword hit on Stormlord then tried to flee but stormwing shot her with a force bolt.

The train stopped and army came. Tank and Stormwing Held Fenris with his strength and her TK. He formed blocks of carbon around ther were wold and they couldn't beat him through his healing factor. When Stormwing and Seraphim came they poured on lightning and holy light bolts till he reverted to human form.

Oficials and people impressed and asumed thanks to Stormlord public and army thought they were legit Defence Dept heroes. Seraphim healed all wounded passengers in the carraige-explosion incidents.

Ran back to bunker and Tank tagged his name in wall - "Tank Was Here". On return to own parallel found tag under dust read "Tank was here Dudes". Traveller found classified documents showing a similar incident had in fact happened with key differences. All ended with Traveller arguing they were a different team from a different parallel with Tank who was unconvinced. Also found records another team in 80s had killed Hitler then broke up after a fight because many in team wanted to bring him to trial.

A good session with some roleplaying and players being jerks to each other but stopped bad guys anyway faster than I planned. Will try and keep up this ratio as better game. Too much blow by blow fighting not as fun to blog. So hopefully will get to write more for this fortnightly game. Didnt get to use the Impirial Japanese team with exploding Cherry Blossom girl.

Posted by Konsumterra at Saturday, September 06, 2014