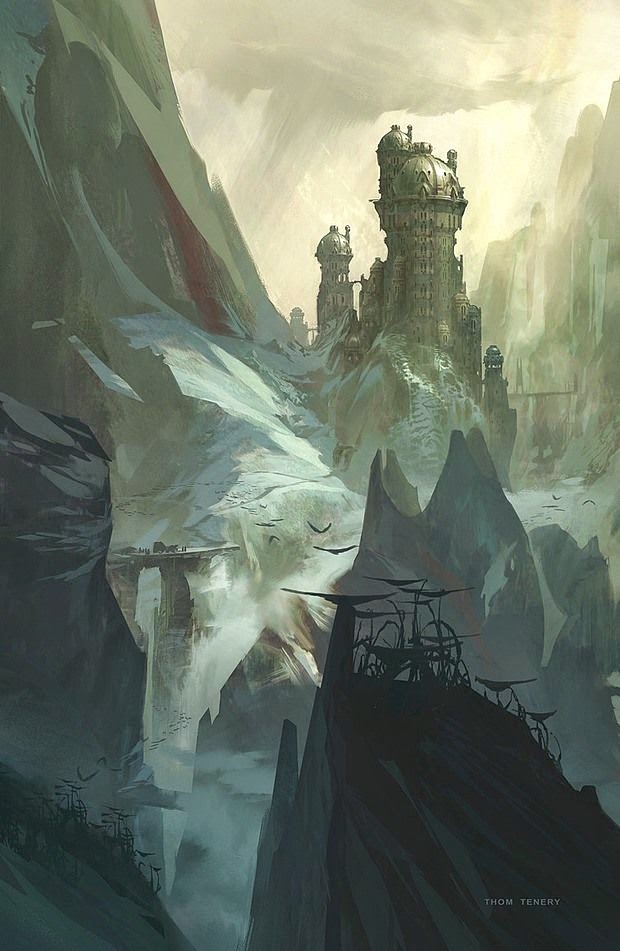 Im planning on opening up new areas of my setting. I want a ash covered scarred land with wrecked war engines of the gods and ruined citadels with humans hiding in dungeon bunkers from past apocalypses and monster hordes and kaiju.

Option A put in north mountains beyond the humanoid monster kingdoms in area about 40 miles across or...

Option B the whole region burred and is in giant caverns of the underland. My underland is different to the underdark of DnD but has plenty in common too. I'm reminded of the underworld lands of north and south America and and Indi and HP Lovecraft.

Any feedback on this appreciated. I guess i always intended island to be non stop meg dungeon with a little bit of so called civilization temporarily on top.

My recent monster machine post was pretty popular. A post on fantasy versions of my planet pychon vitadels will be comming soon. I have unfinished golem one mostly done.

Am plundering BRP books for spells for my Babylon games too. So will report here. Club moving which is a bit sad. Having it under my bedroom floor was a life saver when i was sick. Hope can keep games up despite 1/2 hour walk and i now have to pay per day use (?). Will see how I manage. I use tons of books too which is a issue. If I could consolidate to sundays would be convenient. Option of clubs in city as three near work which I will check out. Easier to get too for me.

As gamers away and sick had a two week break so i said a year passed in game time.

Angel shape shifter and her she-orc bodyguard Namara, her priest Thomai and her former linkboy Roderick now a theif. He paid a necromancer to age him a bit. Angel has been running her poorhouse clothier business and got some heat from tailors guild for paying workers too well. So she married a seniour guildsman's handsome son, a designer of fancy threads for noble women. He sold his bachelor pad in the nuveau rich district and they got a pad in merchant town and had twins, a boy and girl.

Bard living with her girlfriend leslie in nice bit of redlight district. Leslie is legaly a man so they maintain respectability. Leslie does the bardic singing while she does the spell slinging. Have been selling healing potions and tutoring young wizards from the university. Her familiar trudy the goat and servant Bix the kobold live in the house also and all are happy. Kato the bodyguard still aound despite the last year of safety.

Acula Flint the archery master has settled into the former cheap murder house with both wives. The human one, a frightfully ugly one he rescued from the dungeon bore him a son. Her aunt was being a live in maid and married his dad. A few other in laws live in and visit and Acula has a hunting license and works with father in law butcher to provide exotic meat to nobility. He goes hunting most days with his dad and brother and other wife Olga the orc. She bore a litter of four, three girls and a boy who are knee high and always building pillow forts and ambushing dad on the stairs. Of course thy are kept away from human half brother. Olga has ditched her other two orc husbands.

The secret police know Acula Flint cheats on his income tax as angel shows party accounts all the time to tax man.

So the old mad wizard dungeon has been occupied by local villagers who herd animals out every dawn and farm area on forest edge. The many kobold slaves and orc mercenaries have been trated well and are behaving well. Kobold and human kids play in the former murder maze together. Party considering starting a adventuring school here. The Angel has brought many from her poor house to settle and now work houses thriving. Now named Mazewood

Party is well respected about town by many guildsmen and petty nobles they met as bodyguards of rich drunken brats. Orcs love them for being good masters and treating orcs well. Orc warrior sisterhood like party for including two of their upcoming champions.

So no news of Chandaru the sorcerer since he fled party. They have scouts check out the dungeon he fled into and mostly hobgoblins and gargoyles seen. Party last fled were-rats because they only had a magic dagger and had not returned since. Party visited their enemy Chandau's mum (posing as his school chums) and she had not seen him since graduation either.

Barrony offering adventurers rewards for mapping the north lands but party keen to kill Chandaru and check out current dungeon they have named "The fallen Reliquary".

The entry of the dungeon is a cathedral style carved archway with vandalized carvings of angels fighting demons. The door is at a bit of an angel. Few others know dungeon here and party have staked a formal claim in the titles office. Lore says the dungeon was a holy place to store holy relics. Angel seeks to rescue them and return dungeon to a good place. Party stocked up on silver weapons. Considered getting magic arrows but saving for bows seems a better buy.

So team arived with a dungeon donkey cart ready for action. The hobgoblin pig pens, barn and slaghter yard were all in ruin since party burned it down last year. Went up to great ajar door and Acula went in as he is sneakiest. He almost bumped into six hobgoblins. He managed to kill half with his point blank mastery and got a bit hacked up before others came in and killed them. Piled corpses on wagon. In a great hall going into darkness there was a mural of pilgrims with gifts coming here and overcoming obstacles. Monsters had drawn mustaches and dicks and skulls everywhere and smeared feces on them which upset Angel.

Went down guards side passage and unwittingly entered the barracks and prison quarter. Acula poked ahead and all followed into a room of rotting goods. Several saw huge centipeds and the orc women looked pleased. Olga wanted to catch some so kids could eat propper dungeon food. So they took vevelins and probed for them. Namara got one first and eight one yard long centipedes came out angrily. Party got them and Olga and Namara cut of a head and sucked guts out. Cut off heads for alchemists and took bodies for Acula's kids.

Acula took a peek down a hall and saw ten side passages to tiny cells. The first two with hobgoblins sleeping. Accula and Olga killed four in a cell and went to next but party stopped them. There was a fued that killing sleeping victims dishonorable and evil. One hobgoblin yelled at party to keep quiet as it was the middle of the day for Jubilex's sake.

Acula moved to kill four more and party got stroppy. Hobgoblin looked to see fuss and called allerm. Party pulled back to bottleneck hobgobs as they lept up and put on sheilds and charged. They came in waves with interlocking sheilds and spears. Three master archers in party helped whittle down front but length of spears gave hobgobs a chance as they charged into the room at end of hall party set up in. Waves of hobgoblins with maces, throwing javelins from rear ranks. Leslie sang a inspiring song and Her Bard lover got bored and used two sleep spells. Last screaming hobgoblins fell. Loaded up dead's armour and weapons and heard no reinforcements. Had 16 hobgoblins bound and tied and donkey a bit over burdened.

Squabbled about going back to town but odds were dungeon would never be this easy to enter next time and plenty of healing to go.

Acula snuck up on kobold kids writing graffiti and got Bard and her kobold to talk to them. Kids were writing abuse to hobgoblins. Explained layout of Dungeon. Levels went up into mountain. This was barracks prison area. Store rooms and a temple nearby. Other half had kobold tribe, caves all monsters feared and chambers beyond guarded by ghosts they said looked like Angel. Convinced kids they had a life of leisure in the party dungeon and said they would aid kobolds defeat the unlawful goblinoids.

Apparently goblins upstairs then hobgoblin king and then bugbears who eat kobold kids then wizards above that.

So moved on to find prison cells. Found dodgy guy in black who begged for freedom. The let him go and he said he would buy them a drink if he saw them again. Other cell had a six year old girl and another had a black cloth over a object. Girl said she heard sobbing and singing from there and guards kept non bosses away. Flpped off cloth to see a naked fairy in a jar sobbing. Bard freed and adopted it. Apparently hobgoblin leaders made her dance for them.

Moved on to find a room which wa a sweatshop to make leather armour with die cutters for scales, hammers and a cauldron of wax. Next room full of butchered half eaten workers. Then a room of rubbish where they looted tools, some nice wood, weapons and a trained messages raven that could say shit in orcish.

Went down a passage and found a room crawling with shit and rubbish and rats. Then found a holy vault room where monsters would not enter. Was a locked reliquary cage door with a additional chain and padlock. The room glowed with holy light. Wanted to grab but thought would keep looking a bit more. Next room with Goblin writing on wall and a box. Kobold kid translated it was a message that said "hands off - signed  Da Boss".

No traps on outside so flipped lid and saw 20 cp inside.  Heard faint ringing upstairs. Saw a eye peeking through a hole. Angel dared them to face her and got a goblin swear word in return. Party headed hastily to exit. Heard screeching and odd irregular running footsteps coming from two directions. Sounded like lolloping odd gaits. From one direction Acula and the orc girls saw four deformed beastmen mongrels charging. From other direction everyone else saw the same plus a armored chaos knight with rusty spiked plate armour etched in demon runes and carrying a huge sword with a saw tooth blade.

They were quite shocked when first volley of defensive fire did not bring a single foe down. Second volley before clash of melee took down several but monsters got upper hand. Angel challenged the foul knight and each had protection form opposite alignment magic. More mongrel men fell and finally the knight fell too. All hurt and worried so collected knights stuff and fled.

Next time the dungeon would be on high alert even by day. Apparently by night dungeon quite busy. Back in town all sold the loot and split a tidy profit. Forty six suits of scale is a decent bit of pocket money. All healed and keen to return.

Offered credit at church if returned relics from dungeon. Discussion of if party should go dig up dead followers and restore to life. Putting in a mausoleum and reburying old followers there.
Posted by Konsumterra at Tuesday, September 09, 2014