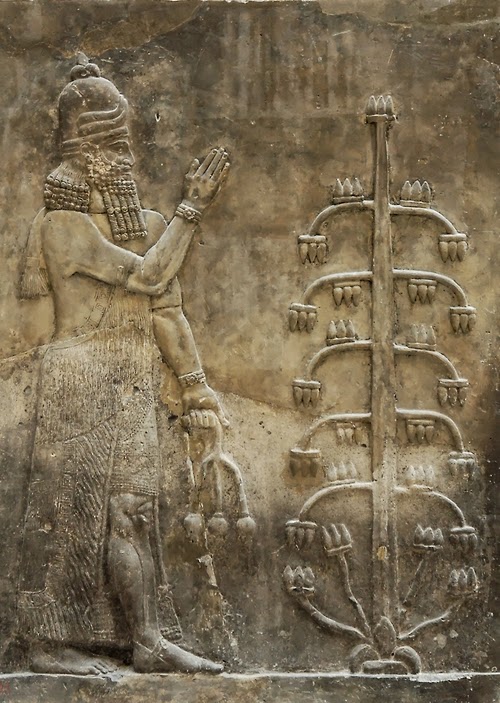 Party returned from mount Mushu to Babylon where some met the gods and those who had missed out when the cave entry had temporarily vanished.

Now aware there were four great evils afoot heroes tried to plan how too battle.

They tried their means of divination, tried to study magic and settled into their new relationships. Kull tried to join Marduk but failed but has gained some help from his new in laws who see barbarian as means to restore status. Ariana had help from Daddy to help her meet a husband. They decided an Assyrian would help family interests to the north andd trade into Hittite lands. She had choice of rich older merchant or noble warrior her own age. She chose later and he has been keen to follow her.

To the North Hanbi king of the wind demons was stirring. He was displeased with his office and wanted more. To the mountains of the west Asag the great stone giant and his Gutian cultists were gathering force in the Zagaros mountains. To the south Tiamat was stirring in the sea and to the west the Anzu bird was stirring.

They sought priests to aid them in interpreting their divination attempts. At one stage there were strong signs that the Hittite lands in the mountains might be source of Hanbi or possibly the Hurrian or Mittani lands. Also asked the exorcists of Pazzuzu in the doctors district how their demon lord felt about his father Hanbi. Apparently Pazzuzu not involved in scheme and other demons jealous Pazzuzu receiving status and reverence and for terrifying other demons.

Pek asking about heard that many of the cultists of Anzu bird were among western barbarians, especially in hills to west of Ur. As his god had defeated Asag and Anzu his cult were very helpful and his gift of manticore and lion pelts impressed them. Nobody else had checked the possibility of persecuting the cults locally he found in Babylon depictions of Anzu in scribe district and being illiterate told others of his discoveries. As cultists could be killed easier than gods this tactic seemed attractive and party went to visit scribe. Parked chariot and barbarians of party outside while the egghead literates went inside. Scribe shop had supplies and services typical and some ancient tablets on display. One depicted the Anzu bird and saw several version of his forms. The lion bird (a griffin like monster), a half man half bird thing and a great eagle with a lion head. Iltani harassed him to buy it but he denied and said they had to leave. Toth got a cramp and his leg was paralysed. Outside some men in scribe kilts with shaven heads a rods came out and seemed to spot party barbarians in the street instantly. They were mind linked and one had detect enemy but party had no idea. Iltani alo got a sudden stif leg and then fight was on.

Sobek could not see the problem and as was a street full of healers they found more.
Inside Pek and Iltani fought the shopkeeper and the scribes maiming them easily while one older man escaped. They looked at the tablets to see they were books of sorcery. Found a cylinder seal of agate that could print tablets with a contact Anzu spell. Iltani had called for Ishtar temple for help but Priests of Mark assumed authority and questioned everyone. The Leader wore a dragon costume with a face inside the dragon mouth. He set a date for a trial.  Ishtar priestess would attend to defend party but evidence and testimony of others was strong. If case difficult to resolve the sorcerers would be thrown into the river but the trial found them guilty and priests of Girra (or Nusku or Agni the fire god) came and burned the survivors of the fight.

So armed with the realisation cultists were everywhere they decided to head to Ur to kill cultists. Packed bags and headed with donkey cart south through several cities they had never seen before on a different route. Bandits attacks and were taken as slaves to UR. Party have become good hunters and now with plenty of minor spells the average youths and poor barbarians have little hope. Every trip they now feed themselves and collect skins as they go.

Arrived in Uruk and Iltani took party to her sisters home to rest a few days.
Posted by Konsumterra at Thursday, September 18, 2014