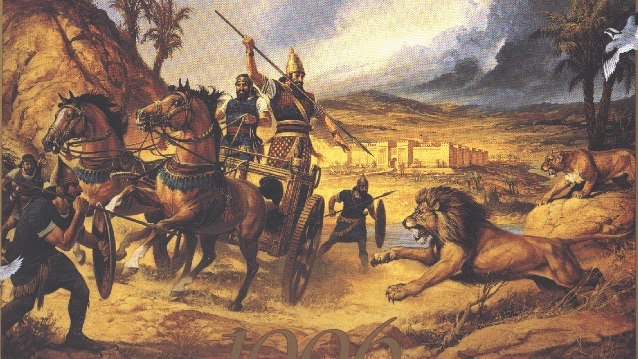 *Starring*
Toth (Steve) Half Egyptian Nergal Cultist has taken to wearing a vampires black kilt, blackened armour of noble quality and a huge khopesh. Keen to serve the lord of death and keep the underworld secrets from mankind. Keen for pilgrimage to Cutha.

Iltani (Olaf) Sumerian daughter scribe of Ishtar cult mother divorced from father, good with rod and dagger, has a daughter and is divorced, receives alimony payments from Sumerian husband. A devout scholar and Ihtar cultist seeks knowledge in all forms. Interested in magic.

Sobek (Hanna) Amorite chariot driver and archer whose clan worship lion ancestor. Her ancestors to west had some Egyptian links but have fled from west as Egyptians pulled out. Is good with animals and likes taking responsibility for livestock captured and donkey carts. Father allowing her to practise drive Sumerian battle donkey waggon with a team of four. Loaned a slave to drive other donkey cart and care for animals. Still looking for religion possibly join Ishtar but also meeting Shamen.

Pek son of Farg (Rod) a wild Kassite barbarian archer and initiate of Ninurta, slightly better assimilated than other barbarians. One of last clans to remain wild while others assimilated for hundreds of years. Wishes to be a mighty hero and monster slayer

So party heard clan leader's concern for stockpiled knowledge uselesly being hoarded instead of helping the growing problems across the land. So now he sent to Mari to the north a former rival of Babylon and more northern cults and run down since conquest. So they might have more available lore there. Set off with less people and no chariot.

Party pleased they had killed monsters with team work and finding killing bandits profitable. They foolishly suggested monster had no hope against them. The gods tend to overhear boasts.

Decided 9 day trek would add a day by visiting Cutha the great necropolis dedicated to Nergal only 12km away and the great entry to the land of the dead. Pek visited his temple before leaving and was quested to get a lion pelt. Sobek and Kull visited Shamen and aranged to battle spirits for magical knowledge.

So almost arriving at Cuth after lunch, Pek was delighted by lion footprints. Heard lions growling. Almost as if they were vocalizing words. So they followed them up slope between two crags and something far worse than lions came. On each side of path a manticore appeared. They lept at Pek and Kull with the biggest weapons in the front. Pek managed to block the rows of teeth with his new Maul but was stung in the arm by deadly poison almost killing him. Kull was luckier and with his huge axe neatly sliced off the manticore's face and it fell dead. All piled blows on the manticore menacing Pek and slew it. They tried to treat the wounds and poison but was hard work. Skinned the beasts, collected the monster tails and collected their teeth making them into necklaces. Pek rode on the donkey cart.till they got to Cutha.

In cuth they visited priest of Nergal Toth met in Eridu and they were welcomed. He went to the great house of the dead and smelled the vapours there that he first smelled in the cursed mound earlier. He passed out with visions of the sun god entering the underworld. He learned lots there. He paid a thousand shekels in gold and silver for a diorite statue of Nergal and other gifts and learned some magic. Others were impressed by kindness of Nergals priests and Iltani bought a statuette of herself preying to leave in the temple. The local Ishtar temple was not as big as others but they learned new stories of the goddess fighting the Underworld to rescue her sister. They were far more welcoming of Sobek too.

They ended up staying week as Pek needed healing and all happy to learn from the city of the dead. Finally they left for Mari into the desolate north where you could barely find a city in a days march. Met mor country kids hoping tomug them and the all snuck up on them, killing the leader and driving them off. Hunted gazzelles and other critters and some more mixed barbarian bandits who when defeated told of hardships in the wastelands. Toth was drinking by a waterway when Kull cried out a thing in water was stalking him. Iltani and Kull threw javelins at it scaring the scaly beast back and lost a small fortune in javelins.

Finaly in Mari and could see great palace and city sadly in disrepair. Great Ishtar and Ninutra shrines and many barbarian gods. Visited clan trade house to stay and met Assyrians and Mittani and Hittite traders. Saw Iron weapons. Wilst in very old Temples of Shamash saw many depictions of him descending to the gates of mount Mushu to the underworld as he did each night. They spent some days selling goods like Manticore teeth and picking up bits of foreign speech before deciding Mount Mush worth a visit. Found what they could in more friendly (less secretive) temples and made a map.

Found a friendly village where Amorites greeted them and impressed by party warriors. Sveral recruited youngsters here as servants.

Into wilderness found gazelle and goats and met a dreadlocked wild man. He was a shaman devoted to Enki who told them how the local barbarians regarded as sacred and would defend it but would not follow once there. He healed some of their injuries and accepted their gifts of meat and goat skins. Iltani had a dream that Enki warned her to not accept gifts from the gods.

She knew Enki had cheated humanity from imortality to keep the status quo before and was wary. He had also saved heroes with his advice too. Such a cunning and tricky god.

So after days they reached mount Mush and began the ascent.....
Posted by Konsumterra at Saturday, September 06, 2014