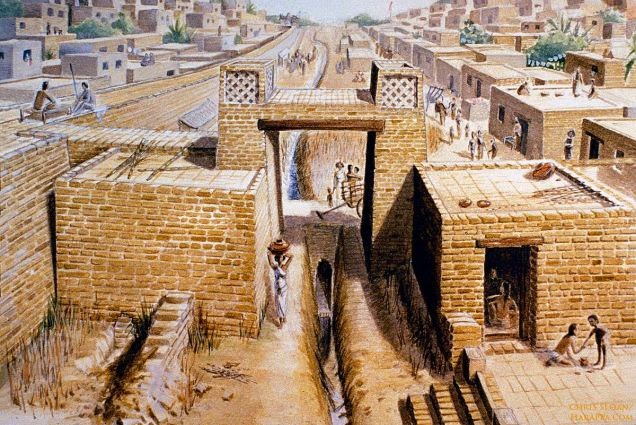 Players can choose to be local the the land of two rivers. Babylonians currently are the dominant power. Akkad is the old empire long gone but respected. Sumeria is the oldest kingdom revered for founding civilization and wisdom. Assyrians like Babylonians are a new power, skilled at war.

Local Nomads and Barbarians roam the wastes and mountains. They are despised as primitive brutes but they have in the past taken over civilized lands and become assimilated within 3 generations. Then the next tribe conquer the soft city people in a process that has been ongoing for aeons.

Foreigners are many. Some get more respect than others. Some may arrive as traders but most come as slaves or are children of slaves.

It is recommended one of your parents be Babylonian or from one of the two river kingdoms as this will give you better status and language options. Strangers often have no rights and are victimized without family or friends to aid them.

King Humarabi is dead - his sons have taken control

Language
Sumerian is like Latin, language more written than spoken and used by ancients and clergy
Akkadian is the international language of commerce since Sargon the great
Babylonian and Assyrian are versions of Akkadian and default at 2/3 skill
Babylonian currently in vogue for law
Assyrian in vogue for military

Foreign languages are known by scribes and traders.

Some foreigners have more than one written language - an older pictographic one for religion and propaganda and a more phonetic alphabet for trade and every day use. A clever scribe knowing both can make obscure jokes and double meanings.

Local Peoples of the Twin Rivers

The standard monthly ration for an adult male was 60 mina of barley, for women 30mina , for children 10-25 mina. A silver shekel buys a sack of grain with food for a man for two months. A daily wage of two mina of barley plus some other food stuff like mustard, cress, beer, sesame oil, onions.

It is forbidden to charge interest

As most cash in grain you can only store it for so long and you must either plant or make into beer or bread. Or you lend to a farmer who gives you fresh grain in return

Barley was the pre-eminent grain among Mesopotamian cereals. In the first millennium the cultivation of wheat had virtually come to an end in Mesopotamia due to the increasing salinity of the soil. Barley had always been a basic part of the Mesopotamian ration system: in Babylonia people in service of temple and palace received rations, basically one to two litres of barley per male individual per day, sometimes with other products like oil and wool added. Barley was so basic that it also functioned as standard of value of other products, hence as money. It will have been used as small change, where silver was used for expenses of greater value. Barley was harvested in springtime, mainly April to May.
Dates were the second ingredient of the Babylonian diet. It was a highly caloric food and could be used for different purposes: to be consumed as fresh and dried fruit, processed into syrup and cakes and stewed in fowl and meat dishes. It was also used in brewing a kind of beer, the national drink of the Babylonian. It was what was wine for the Greeks and Romans. Dates were a good alternative to barley in time of scarcity of the latter. Peter Vargyas observed that prices of barley fell in the month of the date harvest, i.e. October (VARGYAS 1997: 339-341; 2001: 122)
"Mustard" (kasû) is written between quotation marks, since the relevant Babylonian word, kasû, cannot be translated with certainty. The translation "mustard" has been advocated by Benno LANDSBERGER and GURNEY (1957/8: 337) and has reached the dictionaries (AHw and CAD) and the main edition of the diaries. Marten STOL (1994: 175ff) proposed to translate it as cuscuta, the dodder plant (presumably used in brewing beer), but other translations have been proposed as well, like "the common beet", wild liquorice and cassia (references, see SLOTSKY 1997: 31). It was apparently used as spice in the preparation of meat and in the preparation of date beer. It was also used in cultic performances and in medical treatment.
The harvest time is difficult to establish. Vargyas concludes that there were two harvests, in summer and in late autumn (VARGYAS 2001: 207).
"Cress" (sahlû) is equally difficult to determine. M. STOL (1983/4: 24-32) has argued that it has to be equated with the Greek word kardamon = lepidium sativum = "nose smart," of which the seed was eaten like mustard (not kardamomon = elettaria cardamomum). It was harvested in spring, like barley (JURSA 1995: 178-9). It was widely used as spice and savoury herb.
Sesame (šamaššammu) was cultivated for its oil. What olive oil was for the Greeks and Romans was sesame-oil to the Babylonians. It was planted in the barley fields after the barley harvest (June/July) and harvested in October. A second crop may have been raised from January/February (sowing) to May (harvesting) (cf. VARGYAS 2001: 251).
Wool was the main source of textiles in Mesopotamia from early times. Numerous texts about the raising of sheep testify to it. It was an important export product in the early second millennium. The shearing of sheep began in the spring, but could be a continuing process that went on for months. Flax was grown for producing linen. The city of Borsippa is said to have a major linen production centre (Strabo, Geographica, 16.1.7) and it is mentioned in some administrative documents. It does not occur, however, in the astronomical diaries.

Prices in egypt
The list below reflects New Kingdom prices of a number of commodities in copper unless otherwise stated. Copper was worth approximately one hundredth of its weight in silver during the New Kingdom. Ten copper deben would have equalled one kit of silver. There were wide fluctuations due to varying sizes, quality etc, and prices were affected by the passage of time.