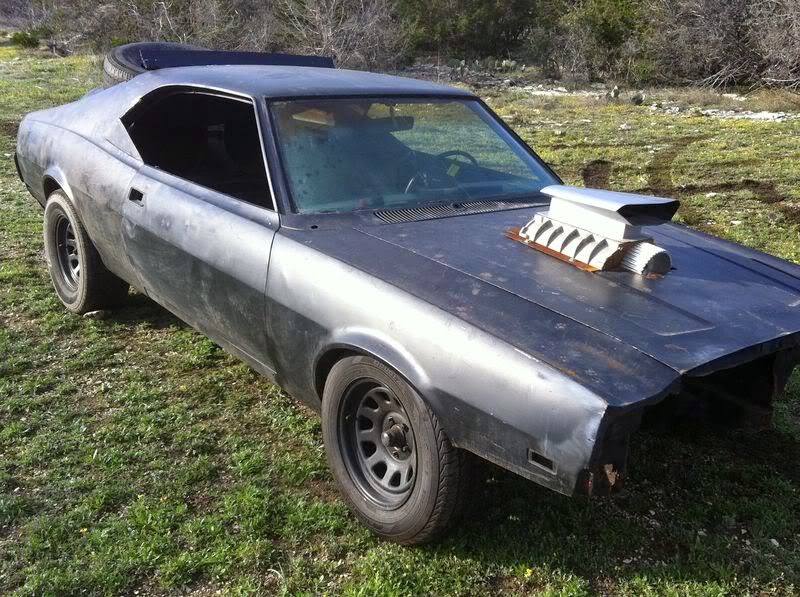 So i lashed out and got the Rubble and Ruin PDF chaosium monograph on Drive Thru as price had dropped. Never seen much talk on it which is not a great sign. As a post apoc setting goes it is grittier than most, more like the Aftermath setting or a bit more advanced than mad max. It has lots of evocative ideas for societies, genetics, cyborgs and car fights. No mutants but it is only 20 years or so after he bomb but genetics and cybernetics is closed. Gets very close to modified animals but does not step far from the idea. As a BRP source book A little bit brief on some rules and rule mods from standard BRP I dont think are worth it. I think it has some good ideas to plunder for many post apoc and dark future settings. It has a campaign area and some adventures I cant really comment on yet.

A few other products that are handy too. My setting is cyberpunk in the walled cities and mad max outside. A bit of Judge Dredd even. So the Dark Future game by GW and supplements and white dwarf add ons are a must. The novels by Jack Yeovil are genius (really by Kim Numan probably one of my fave genre writers).

Death valley free prison for Iron Crown's Cyberworld setting is genius. Great evocative art of scratch built Mad Max flavour vehicles for a huge outdoor prison complex. Cyberworld game has a very underrated setting a biit more fun than most cyberpunk settings. This and Dark Future have inexplicable fortean events making the setting a bit weird and uncertain as to what could happen.

Cyberpunk has good content to steal for my outer cities but I always found a bit too clean and cool for me. plenty of Anime like Burst Angel did it better. I could add some stuff stuff from Chrome books in my setting easily. I would add more robotics (something cyberpunk lacks) and drones and even mecha. BRP mecha book is a reasonable book but Id probably have to change it a bit. Mekton the anime book from makers of cyberpunk pretty good too. I'm not adverse to having a transformable vehicle as a example of over the top car tech from a city.

I have stolen from Top Secret/SI and it's kind of proto cyberpunk setting F.R.E.E.lancers. The high stakes gamble has some good car related stuff in it. Once again a world in ruin, with companies and the rich sheltered from the worst effects.

GURPS Autoduel is great too. The 3rd ed has one of my favourite covers and suits of armour n a game product ever. I don't get why later ed did not use it. Setting has mix of pre or near apocalypse, companies, immorality and blood sports. The Carwars road atlases and Uncle Albert accessory books are good too. Some third part modules i need to inspect also.

Ill be presenting some vehicle accessory price lists then vehicle build rules soon. The game has a life of it's own now and if i get it working i might run as a con game or even a wargame. At least BRP works well with metric while i never liked straight d6 games like Traveller, GURPS and Carwars.

As my club old timer i am referred to as a simulationist. Despite best efforts to convert me to Gumshoe, FATE and Nemesis engines I find story games egoistic and dont feel risky. I even exaggerate my wounds in them and never feel like I will die. Im not a Killer GM and I run games to have fun but I want players to feel fragile and that a mistake will smear them or drive them mad. BRP does this well. Im also glad to feel my maths skills improve again as they had deteriorated with other systems. The criticisms I get about BRP I find funny because I remember games that sound like these accusations far more like FGU engine games with derived stats and 30 hit locations being run by war vets, survivalists and hardcore wargamers.

I still don't see how a game that everything you need is on the character sheet can be bad. Don't like skill curve - actually use mods. Don't know why you should care about stories in COC? Why do you need a mechanical nudge or not just write your way out like most scenarios actually do? Worst thing in DnD5 is the mechanical roleplaying nudge. If I really wanted to be an actor I would go act and I have been a performer. I can stay in character for hours but some cant. I don't want to play a disabled old guy all the time. I don't have room for costume as my books and art stuff take up too much of the cube i live in. One shots lack continuity I like, but are occasionally ok. Probably why board games dont do it for me. LARP vampire games popular with my friends but i just want to kill vampires and find these games are too player vs player, egoistic and resemple school, gang and workplace bullying too much to be fun or escapist.

Some players are smarter. Some are better actors and good at immersing in the setting. And some people like to be macho and be strong and carry big weapons and smash. That good variety to have at table. Players who want to jeopardise whole mission to role play or get too player vs player or just slow down game perhaps need more story based mechanics. I find some games like gumshoe to weaken game master agency, lack continuity (and limit improvement of characters over time) and to actually be more linear.

Club will be moving soon from building I live in so probably will game a bit less and get back to writing, design and art and work as my health has improved. In a year or so will be interested in moving somewhere with more room for books and comics I can afford again where I can use spray paint without sabotage and whining from others.

Next year will do BRP Pulp and Rome settings possibly a stint at my Decopunk Cthulhu Metropolis which could morph into Flash Gordon. A straight SF would be nice too. Will still do my Exile Island DnD still and still interested in publishing stuff.

I will play DnD5 i think its good and i will get players book. About half the oldschool gamers I know are trying it and several club games converting from 4th ed. I dont really want to write for it yet but Im enjoying seeing what others do. BX is more heroic than BRP and handles my setting, Psychon and the more gritty/straight long stairs stuff fine. 5th ed is fine for me as a player but i crave oldschool still to DM, Its a bit too heroic for feel of my games and I play Marvel when I want that direction.

Tables below are for me BRP game. I use 1 second combat rounds which is pretty harsh. The other rule set I have is Recoil rules where most guns shoot same rate but get harder to hit more shots you take without stopping. Has not been a problem in play and players happy to take cover and rest a second. Has made big guns slightly less popular. Will detail somewhere soon. This sheet isn't perfect yet. Will do vehicle hit tables yet. Realised I could do WW1 planes with similar rules. 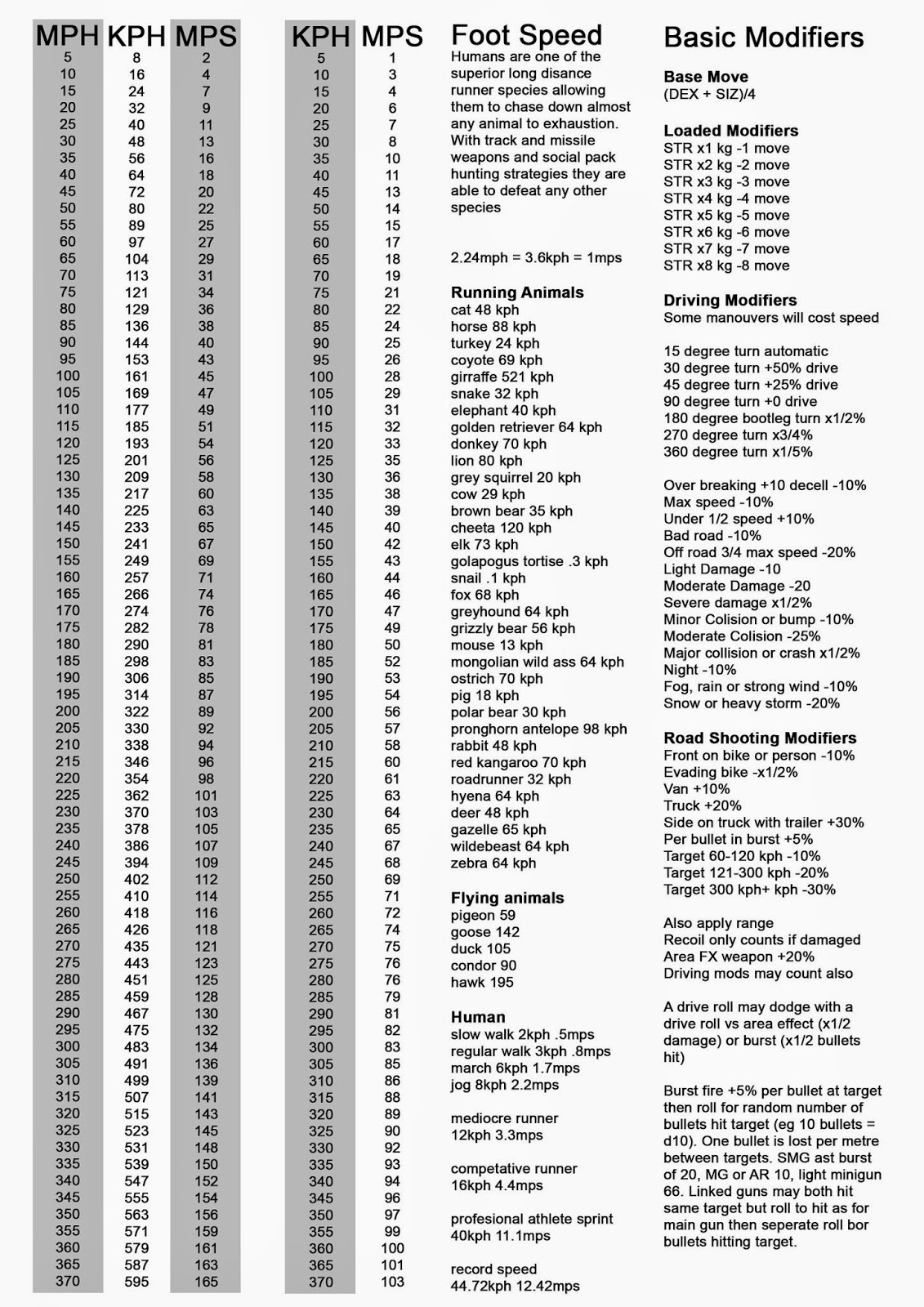 Posted by Konsumterra at Saturday, August 23, 2014