Roadwar 2000 Journal: Shootout at the shoggoth mine 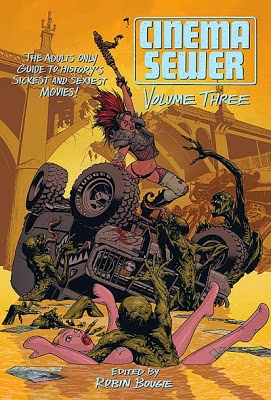 Wasteland mutant freak with car built only for ramming with metal shutters over windows and huge armour slabs in front and back.

A ex sheriff out for revenge in a police interceptor. Town destroyed so police status active even though a death racer

A sniper veteran who is just getting into bikes

A cyborg war vet with self control issues and a van

So gang with ninja, sheriff, mutie and sniper on way to b list death race. The semi big league. Eating in a roadhouse chicken shop when tv add for Bobs BBQ restaurant chain came on with promotion to kill party and get $5000 per party member that never makes it to the race.

A bit unsettled but nobody in chicken shop cared. Got moving. Sniper with cyber eye saw dust plume and zoomed in to see bikers coming. Remembering last time he shot first and initiated total kill on "innocent biker gang" he held fire. Bikers got closer. 300 metres....200 metres....100 meters then they turned off road and fled.

Two hundred k later and saw another gang in formation zooming in. Sheriff accidentally misidentified as gang who killed his family and accelerated to 180kmh. Bikers began evasive driving. Rest followed him as he began to fire twin linked machine guns. Destroyed leader of gang then put lots of holes in second in command bike frame but guy somehow made it through. Got closer and ninja girl creamed another from her bike MG. Second in command finally lost control and flipped bike and turned into a red skid mark.

Finaly got to ram range with both cars and ninja bike in formation. Sniper held back as closest to weaponized bike was his cyberlinked assault rifle in rear facing mount. Gang dodged police interceptor. A biker jumped on police cruiser roof with chain. Another attached a crude home made stickybomb to car side on back door.

Mutie had a guy miss with a molotov and swerved into two cycles smearing drivers and crushing bikes but slowed him a bit. Ninja fired a few more bursts and missed and tried to do a 180 bootleg turn and only managed 80 degrees and a huge skid. Sniper tried to kick a guy on way past but got off some bursts with improv rear gun injuring more bikers.

Sheriff linked to car by brainjack so leaned out with truncheon to knock off stickybomb. Got rapped by chain in helmet. Mutie pulled up from behind with his sawn off and liquified biker on cop car roof. Sheriff got his chance and pushed off bomb. Got 5 out of 12 bikes, last seven went off road and escaped. Bomb went off with napalm and explosives and nails. Teamed moved on.

Got to armoured truckstop that looked safe in greener more humid zone. Fairly sure not a biker gang fortress. Let through gates after hearing rules. Parked and friendly mechanic offered services. Ninja got her bike recharged. Mutie got a bio slurry fuel plant to turn roadkill into fuel. Was second hand and stolen but probably safe. Sheriff got a carwash. Sniper disappointed no fancy ammo here.

Joined by old cyber vet buddy in van. Was the less crazy of two that didn't need his therapist on hand. Got huge steaks and expensive booze and swarmed by bunch of average prostitutes. Mutie hired a room and read bible to four of them. One showed him her Elder Nguyen Seth Brethren of Joseph bible and he studied it with horror till dawn. Others rested in cars as still wary of the bounty on them. In morning farmer came round offering them a pig each (worth thousands) if they would get miners of his farm.

Sheriff checked was no legal claim or use of farmers land so party went to look. Farmer invited to house and had a look via his hide in hills at what bikers doing. Saw sheds with bikes and cars. Portable toilets (with fuel plants). Caravans for bunks. Mining shed. Big open shed with grog still and BBQ where miners ate and partied. One caravan had bars where they kept four captive women which convinced team to take job. Couldn't work out what they were mining. Sheriff saw Brethren of Joseph brochures in camp through his extreme telescopic cyber eye.

Sniper and Sherrif set up in the farmers hideout with guns. Sheriff using captured battered sniper rifle from gang they killed ages ago. Ninja made a crude bush camo netting ponch and put over her stealth suit and got to 40 metres of camp and hid. Used her telepathy to evesdrop Black Dragon. the operation boss. A asian merc and miners leader. Other miners all gangbangers and criminals. Pried on Black Dragon with her Gentech research granted powers and overheard him recruiting more miner/scum. Mutie and cyborg went in on bikes using info from Karumi about recruiting to infiltrate. Black Dragon told they would get $2000 a month to mine and kill intruders. Flunkey showed around camp and they got told they would get meat and grog and party drugs and girls. Showed around camp and saw mining shed where soild being sifted more like bad archeology dig. Had cases of aboriginal relics they said they were going to sell but not what miners were after. Saw a bark cylinder mummy. Sheriff who had sneaked closer saw what was in cases and stomache churned as he was of aboriginal decent. Mutie and the cyborg had eaten lots of roadkill and recognised huge emu and kangaroo bones which meant the dig was over 10 000 years into the past.

In mine saw they had cleared out a tunnel aboriginals had sealed up thousands of years ago. Saw hand stencil prints on wall and painted scene of dancers and some amorphous horror thing with eyes and mouths and tentacles. Miners were trying to unblock more tunnels. Huge rocks used unlike anything ever documented in Australia. Found a pattern of emu footprints painted on rocks.

So boys went to work. Cyborg was a demolitions expert and mechanic so he got keys and access to explosives and sheds. Explored camp and noticed most vehicles renegade scratchbuilt from salvage but one black 4x4 belonging to Black Dragon was very high tech. Cyborg concerned it would have sensors against planting bomb there. Grabbed a bunch of C4 and with his own electronic remote detonators started rigging up bombs around camp.

Inside mine was a hard afternoon work for the massive mutant and his crew got way close to getting into a new sealed section that seemed way older into the volcanic mountain. Convinced his crew they would get a bonus and kept digging while most miners went to eat and party.

Ninja girl in hiding noticed weird pressure wave emanating from mine. Mutie felt it too as he broke through into volcanic vent with strange well. Sniper saw emus congregating into three large groups an sneak up on camp. Three groups of 30. He was pretty freaked as they seemed to be acting in unison. Karumi psionicly felt chatter of emus as they moved around her in the dusk forest. Sheriff a bit freaked but stayed put. Even when one pecked his badge.

Mutie returned to camp checking up with team mates by radio. Cyborg had camp riddled with bombs. Both joined miners in party shed and encouraged drinking games. Black Dragon pleased by news from mine went to his car for satellite call to his corporation HQ at Universal Products. Strange winds came from mine and emus crept ever closer. Miners had pulled out girls in chains for a dance floor show and offered mutie a girl. He demanded all of them at once and miners laughed and let him have keys for two and a caravan. Cyborg given one while other woman in tears dancing. Mutie went to caravan and released girl teling them to hold on. Cyborg brought his girl into caravan too. Other girl dancing next to still which they had planned for sniper to shoot.

Invisible in dark to most, cyborg saw them with his thermographic vision. Sensing everything going to shit cyborg got case of explosives and slid under Dragons 4x4 flipping it and injuring occupant. One blast enough to make him have zone flashbacks and rest of bombs detonated. Miners freaked and ran for gun rack after first blast but didnt make it in time. About three got long arms left in party shed but sniper turned head of one with scoped rifle's head into mist. Mutie ran from caravan with pump action killing the guy with a shotgun.

Swarms of emus ran into camp. Karumi followed ran after them. while sherif with scoped magnum desert eagle killed last miner who got a decent gun. Black dragon crawled from wrecked car and got a .50 cal from sniper in chest and he disappeared from sight. Cyborg in full cyberpsych mode ran unarmed with emus at miners and smushed a head with his cyber arm with jackhammer punch mode. Emus were tearing miners into shreds. Karumi locked onto Dragon with her mind and ran for his location. He was applying a high tech med pack to chest wound and was a cyborg. Mutie and sherrif grabbed all the women and were planning on getting the mining vehicle with grader scoop on fron but saw cyberpscho head that way foaming at mouth screaming and decided to head opposite direction into bush.

All heard strange gibbering booming voice from mine that no human could make.

Cyborg got into mine which he had sealed with bomb before to see a translucent tendrin crawl through crack in rock. It sprouted ane eye and blinked at him. Karumi felt disturbance of the being as she ran to Dragon who got into only surviving renegade 4x4. Slightly too late to stop it she hung on. A sniper round hit cars tank and fuel began to leak. She dropped in a grenade and dropped off. Blast damaged vehicle and set alight but kept going. She found a damaged but working bike and gave chase.

In a lucid moment the cyborg shot the shoggoth tendril. Did nothing but made it flex against the rubble and move towards him. Dropped his C4 backpack and left it. Ran a bit and detonated the mine soundly. Psychic presence diminished and the emus ran. Sheriff managed to jump on one and ride it for a bit and fell off. Landed on his bum and thought that was one less wish on his bucket list.

Karumi gave chase to burning vehicle a her bike had four times acceleration she caught up and ran the driver through with her mono vibro katana. Car crashed and exploded. Saw burning cyborg scream and waited till sure he was dead. Even roasted some march mellows on smouldering wreck.

Other got away with girl and cyborg got the mining vehichle. Rested in farmers house and team came to finding Karumi bagging the metal skeleton of black dragon. Found case of aboriginal relics. Sheriff wanted to rebury but rest of gang wanted to take to museum for cash. At least they dropped the black market idea.  Found loose cash, car parts, lots of handguns and tool. Let farmer keep lots and party agreed to let him hold onto pigs till market time in three months for extra cash instead of filling back seats of cars in squealing pigs.

Teamed moved onto bigger town for repairs, ammo and rest.