DC  Comics: The Great Disaster featuring the Atomic Knights - crazy comic compilation of post apoc war stories written in 70s post a war in the 80s with mutants, ray guns and return to feudalism - lotsa good weird stuff. Saw a few others mention this on blogger.

Cthulhu Invictus - after missing the BRP rome book i realized id better gobble up all the stuff like this i can for rome game next year so i napped it up. I didn't like the roman gods as presented in the old monograph version this seems more usable to me or i have not found anything i dislike on first glimpse.

Magic World - more i read more i like. Will steal some ideas o make my bronze age game more heroic fighting. Advanced Sorcery - lots here and a good value book. Will adapt elements of both into my current game. Enlightened Magic not so much as ive gone off golden dawn and syncretism in my old age. Someone please stop brit comic writers over using this stuff.

My Babylon game i did crazy research and history book buying in the past while i was meant to study classics.

When i was a poor student in relationship i would buy 20c national geographic mags and photocopy useful stuff from libraries, especially kids books. Have about 6 inch pile of images.  Actually Ive stolen RQ2 and RQ3 content to use for adventures too. 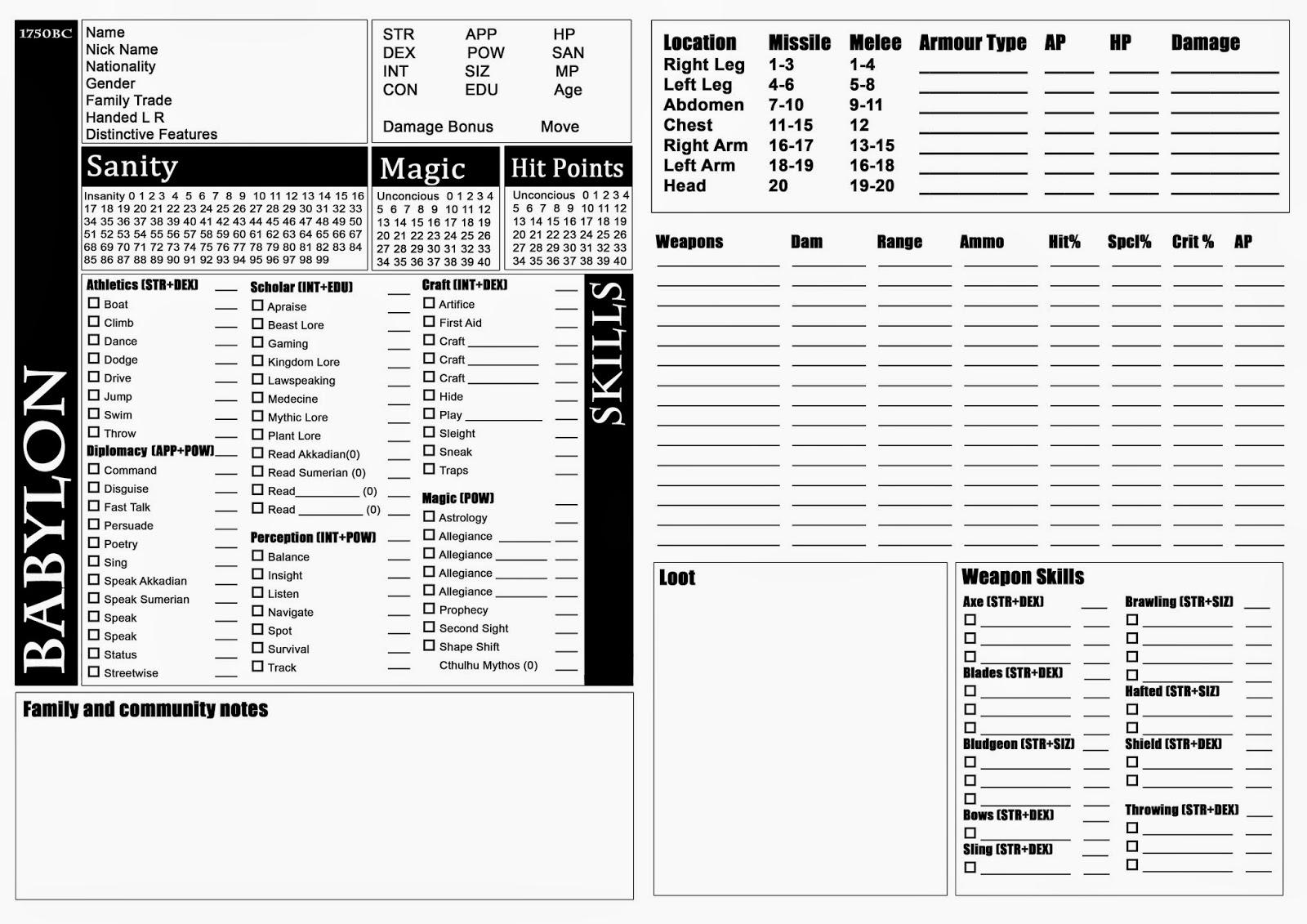 A couple of typos and need to replace ride skill with drive but serviceable for first session.

8 players - will introduce properly next session.

Most playing barbarians keen to settle in cities hired as skirmishers by civilized characters father. He has summoned his kids to serve him during the mourning of king Humarabi of Babylon.

Rich kids complained barbarians so well armed and armoured. Also with animals and war booty while they have measuring rods and daggers. Then rich kids return to nice room in family palace with servants, baths, slaves, and good food and beer and record feelings on tablets. Barbarians living off barley porridge with wild herbs and the odd rabbit or bird. Back to flea ridden barracks after to boas of past battles.

Scenario had march into hidden area of wasteland past various obstacles, met a duck bandit, a bear (bear clan Gutian chased it away easily) and a troll to find money tree. Stripped all leaves and magic fruit dad wanted and scribe with rune spell made tree produce a second fruit which impressed dad. A giant eagle flew of with party donkey with food and tied up duck. They found him days later and captured him and uncle sold him to scholars in the hanging gardens. Told kids to kids supernatural and weird stuff.
Posted by Konsumterra at Sunday, August 03, 2014