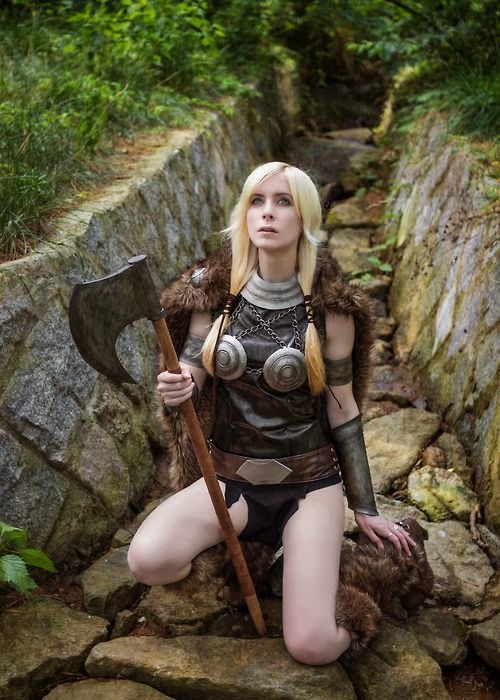 Only two players this week so had Angel and the Archer decide others were looking after dandies and they would hunt the sorcerer Chandaru who had been using posters and bounties to menace party. With the drug dealer bugbear to help them they found the gang that acted as intermediators with many dungeon villains and the city. Talked with gang and threatened to send tax office and secret police after gang. Told Chandaru staying with wizard in house near woods.

Angel brought her link boy, her priest, her she-orc body guard and borrowed the bugbear follower of the dark elf.

Found the house and Angel went round the back Archer got Bolgo to smash down the door. Goat men charged out and a battle raged. Angel moaned at impetuous archer and smashed down the back door. Killed all the goat men. One room had strapped down men being turned into goatmen and archer killed them as they could not be saved (?).

Heard someone upstairs and chanting. Went up top of stairs and sent Bolgo to open. A fire trap hurt him a bit and room empty with three empty windows, one with balcony. While they started looting the room found silver, wizard robes, baby goats in a pen, notes on making goat men and 5 bottles of goat extract. Archer tried to sneak one in his pocket. Suddenly a wizard jumped onto balcony magic missiles Angel then jumped off.

Party all ran downstairs and heard funny sound none recognised but would never forget. A fireball sailed in room and expoded. Bolgo was charred to near ash as was the priest. Angel was down, bugbear alost down, linkboy nearly dead and orc unconscious. Archer clumsily saved Angel and linkboy. Head footsteps go upstairs and chased invisible Chandaru and even hit him with a arrow as he fled. He heard spell casters arguing but loaded up donkey cart with wounded and fled to pub down the road.

Over days party recovered. Went to city and university to find Chandaru's records. Bribed school with secrets of making goat men and identified wizard as Malathas the Transmogrifier. Went to gatehouse reported Chandaru now a murderer and his warrant and bounty were increased to 250gp. Went to visit Chandaru's mother in the wanabee new rich district and she rewarded them with news her son was wanted. She was sure she could help him and thanked party. Then visited his master who reluctantly let them see Chandaru's research into three houses and dungeon he had done a few weeks ago.

One house was the one they had just fled. So Angel released she orc Olga from her care to Archer who was married to her to be his follower. Then Angel recruited another she orc from same order and 8 man orcs to be troops. Recruited male priest also. Linkboy after recovery went to dodgy necromancer and was aged 5 years and is now a rogue, specializing in dungeons. Angel got 600gp worth of healing potions.

Party went off to woods. First run down cottage had a annoying bard who desperately wanted a audience to test poems on and they conned him to joining them. Next house was a folorn grim two story necromancer house. Spoke to aprentice and then master sent out a specialized zombie mouthpiece. Said he disliked Chandaru but offered rewards for any necromantic relics uncovered and offered other services.

Party went into hills beyond forest following ridge up to secret valley by dusk. Area stunk of rotten flesh. Archer scouted ahead and saw a hobgoblin slaughterer house. While some had breakfast others were herding and killing pigs with hammers. Beyond them was dungeon with great stone arch with carved angels in rocks.

Archer signalled others and began to sneak about killing hobgoblins. Killed a woodcutter. Three dungeon door guards and three others chasing a pig. Orcs charged and party clashed with hobgoblins. Archer came from behind and killed more. Party pleased and orcs chasing pigs but one hobgoblin ran into dungeon screaming. As orcs finished him party heard rats which scared orcs.

A single +1 dagger and shield among party not really worth it.

Through the dread woods by night they heard crackling slurping hissing sounds. Archr went ahead and saw 8 ghouls feasting from a stone crypt. He fired a volley killing one then ran back to party. Orcs not happy but formed a line while missile users killed two more ghouls. Horrors were devestating one paralysed two orcs, one got archer and link boy but party just prevailed. Found nearby cave tomb pouring with copper and silver with some jewellery. In the crypt was a LG sword with empathy and could detect magic. Angel most worthy of it. Party reached bards house. Crowded with orcs and pigs but safe.

Party off to city and silver smith at dawn.

Thanks herbie for dropping in late game to play the orcs.