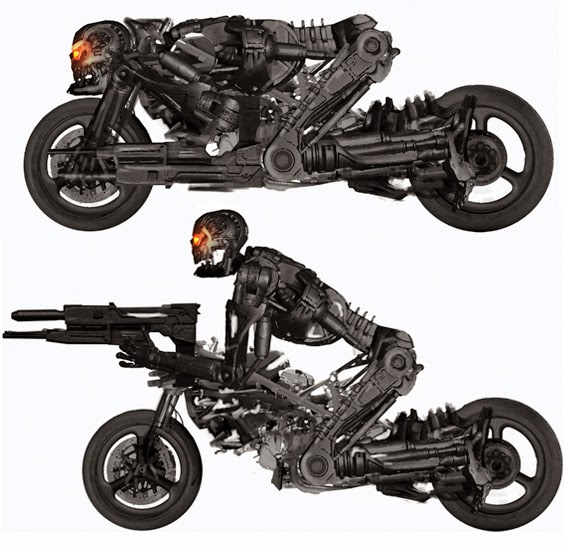 Karumi and here mutant biker were fetching parts for the settlers on their farm when at the roadhouse garrage Mutie saw a car that was oddly familiar. A v8 hotrod built from a compact BMW that he realized was same shape as the necromechanoid car he had battled a few months back. He approached the driver in similar uniform to the undead driver he killed in the longest fist fight he was ever in. Guy was a mutie hater and not impressed or helpful. Karumi with her new Gentech Akira cycle stepped in between and got abusive. Guy drove off after paying for gas then turned and fired 2 rpg rockets. Karumi and the mutie jumped behind the muties ram buggy and ducked. Rockets smashed through road house windows and killed most of the diner patrons. Armoured cash register counter protected the owner. Our heroes set off after the killer.

Karumi i her new bike mage great time and blazed away with a rocket that missed then her machineguns. The car tried to do a bootleg but it's steering was damaged and it was leaking fuel and it lost control sliding and spining into a position where it didnt get a good line of fire. She went past it shooting out all but the reserve tank and the mutie followed raming the vehichle crushing it's left hand front weapon pod and moving on through. As he went past he breathed a jet of flame from his lips and ignited the fuel trail. The hotrod roared and tried to get some distance from the fire but Karumi fired a burst and the car and te fire caught up. The hotrod exploded. Went back to roadhouse owner who said they could claim free fuel in future as he helped his wounded and maimed customers.

Karumi cut up the corpse to find strange cyberwear and structures inside. Took his head and called Gentech HQ Sydney - covert ops dept. The hotrod design was used by a new sanctioned ops company Siguard Ops, with cars modified by Volsung International from their Bathurst garage. Volsung was involved in mega structural shipping and airships and had gotten into space industry. Since the Mars mission probe was silenced three months ago the company had been moving lots of stuff to Australia and expanding. This was similar time scale to the zombie outbreak day.

So got aproval from Gentech and went to Bathurst, the Mecca of Motorsports for Australia. It was full of v8 racers of all leagues, death racers, mega corp offices, garages, biker gangs and the best equipped cops outside of Sydney. Found a motel without a no mutie sign and got a share room. Went to Diner and nobody recognised a third rate death racer like the mutant. Met a mutie merc named knife-face whose head was a elongated wedge with a silver metalic edge. He looked angry but mutie brotherhood broke the ice.

After that went to Volsung office. Four stories with razorwire and antenna and dishes on roof. High tech security everywhere.  Office entry was closed but friendly viking like mechanics in the garage working on a hotrod conversion. Discussed what sort of parts available and Mutie got interested in a biological air filter installation. Mostly they were booked for months but offered to fit him in at 3pm tomorrow. Karumi and the mutant saw occult and fascist regalia among badges on office wall.

Karumi took mutie to the Templar mororcycle brotherhood club house. Some were known as mutant haters and the huge fire breathing freak was wary. Karumi was Japanese but knew the world wide gang worked with lots of Gentech covert ops. The two did ok socially and a Female Nazi gang the Aryan sisterhood ofered to take him home even though he was kinda awkward. They left and Karumi tried to find the local Warlord. She was taken to his huge spiked throne lined with buffalo hide. He was in all black gentech armoured racing suit with hemet. Had Thule Broderbund markings and Templar symbols on his suit. He didnt seem to speak, communicating by a mouth piece. She couldnt read his mind. But put it down to her failure. She aranged deal to hire 5 men for $500 for tomorrow but $2000 if there was any unusual action for a murderous biker gang day out. She really couldn't tell if boss was talking when the speaker put his head to bosses and whispered. He spoke how they both served the Temple and was happy to help her. She was vaguely aware the Gentech board dealt with a group called the Temple.

After paying a little old cyborg banker in nazi uniform jacked into a terminal she went to bar.

The boss waved men cracking onto Karumi away and she went to drink with her men and hear gossip.

Gangs in town were busy molesting refugees from huge zombie infested area also ransacking empty property in the zone and killing zombies for fun. Armed forces were moving in and reserve units having exercises in area. Satisfied by gossip from here hired gang bangers she declared was time to go home. The asked if she wanted escort back to motel. She agreed and chose youngest hottest ones with long hair and no scars or cyborg parts. At motel she invited them in. She was pleased they followed the old Templar code of brotherhood and were openly bisexual.

Mutie was chained to a bed, urinated on and had restrained sex with whole gang. They branded his arse with a swastika and said he was now their bitch. In morning he was thrown out of their gang house naked with his pee stained clothes in a heap.

It went better than expected. Met Karumi as her boys went to get ready to ride.

At 10 the group set off for the Zombie quarentien zone. Passed some Josephite refugees and as aproache border saw a Volsung Hotrod with a nercromechanoid version behind it. As range closed the Volsung rods, fired RPG rounds and missed. Bikers opened the v formation so rockets couldnt kill more than one at a time. As closed machine guns blazed both sides. Most bikers used small arms and hid behind the mutant ram buggy except the cyborg templar with a MG in his bike. KArumi went forward dodging and firing making a bit of a mess of the Normal Volsung hotrod. Bullets couldnt get through the huge ramplate on the buggy and it got closer and closer. Karumi went past hotrods that tried ramming her and the templars and missed. Mutant contacted the lead Volsung hotrod destroying it's corner and it spun of road. The nercromechanoid one accelerated away to safety but the damaged one was slowed and on fire as Karumi fired at it from behind with the cyborg Templar.

The car slowed and the driver jumped out. Bikers chased it and KArumi was impressed as the quick drew medieval weapons. As two bikers got fire extinguishers on the car others chased the on foot driver, whose fire suit was damaged and bullet proof armour was damaged by slugs. Mutie cut driver off and got out. Karumi helped with the fire. Bikers managed to hack at the Siguard op legs sending her tumbling. Mutie grabbed her and chained her to his car.

Fire went out and gang set about stripping thousands in parts that they offered to take as payment. Karumi asked the bitch op questions but she was just abusive how her friends would kill party. Mutie saw her interface jacks necrotic. She was being zombified by strain of the bioplague. Her car had a air filter just like he planned to by and it had grown bio mechanoid roots through car and infected her through it's jacks. Karumi used the telepathy that Gentech had vat grown her to wield. She learned of the Siguard Sanctioned op base in the Zombie zone. How the ruling clas of undead were infecting and creating thralls, her dreams of immortality and power and how her master was listening in on these very thoughts. Karumi felt the outrage when the master dropped the link. The zombie plague was actually alien nanites that had fallen to Earth months ago. When a probe near Europa had awoken the alien it sent Spawn to take the Mars mission and awoken the nanites on Earth.

Karumi led everyone back to Bathurst and the Gentech office there. She got a plane to take the zombie fangirl driver to a Sydney biolab. Got cars repaired and Mutie got his new bio air filter put in. Gentech even paid for it and offered to reimberse him for potential loss of his car. He loved the idea his car would be a living monster. He would feed it blood and it would love him. He had no cyberwear so felt secure. Gentech were pleased. Karumis father who had grown her tried to have her recalled but company said no. Studied satelite maps and planned for raid on the Zombie HQ. Karumi impressed by the cyborg Templar took him to bed and Mutant returned to the Aryan women biker gang who were happy to see their bitch come home.

Meanwhile medical corps were merging with funeral and mercenary companies to for Necrotech, the new Megacorp Necrotech was born.

Find out next year.

Will get a PDF ready for these rules as I am gonna make players rebuild vehichles as some of the early trucks came out way too good. More high tech vehicles, transformers, light mechs, GEV, hover tanks, oats and more.

Posted by Konsumterra at Sunday, December 07, 2014