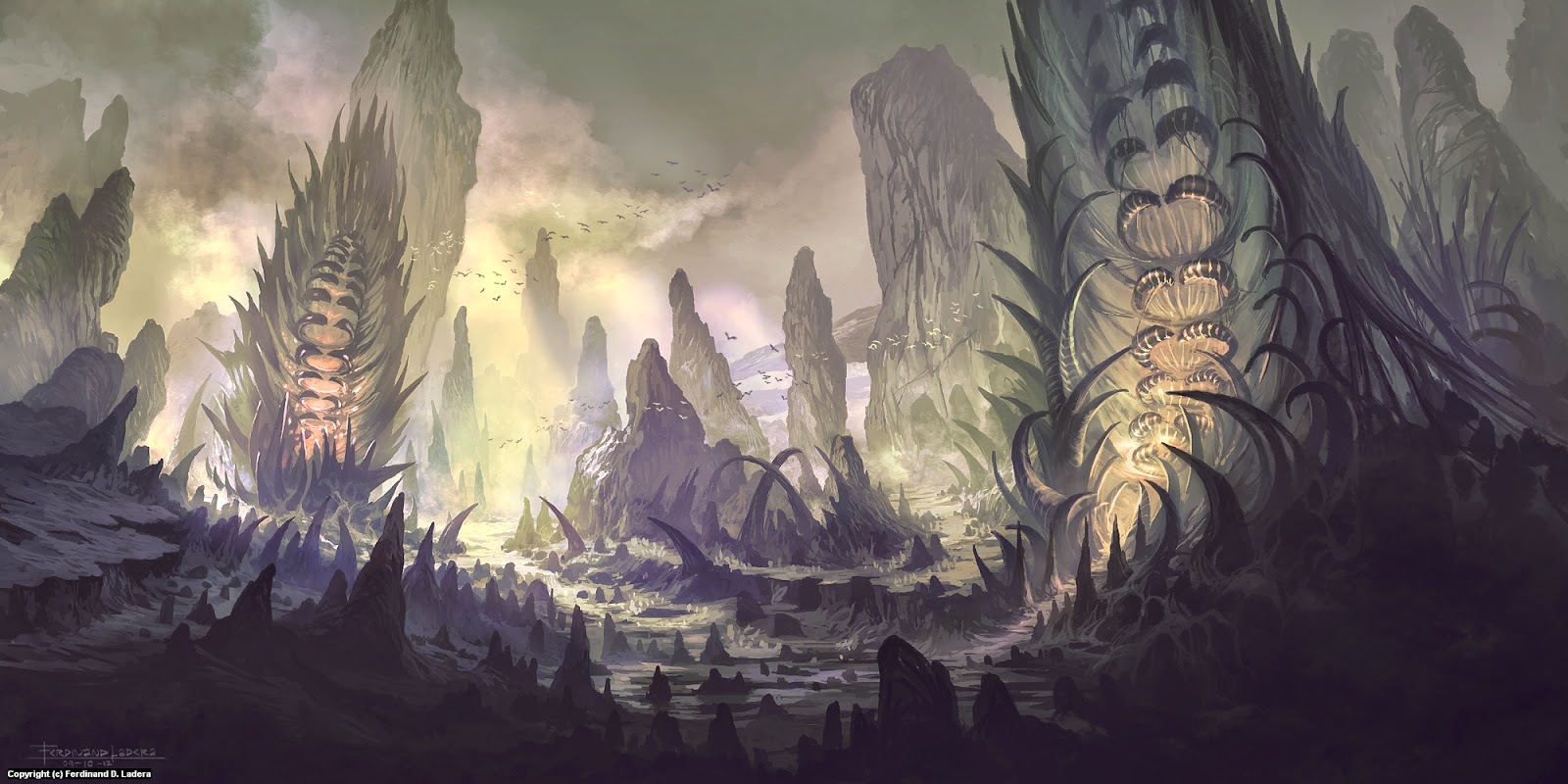 Im getting lots of requests for Planet Psychon games so will replace my Marvel game every second Sat night possibly next year. Also Im getting advice for Blood spells from tween horror loving girls so will see soon.

So the party before delving into upper citadel heard after killing the demon and bugbear templars that orc adventurers had been running amok in area. So decided to go higher away from opportunistic orcs. Into the fungus garden levels. Thee heroes and seven followers. While crossing great hall past stairs through mist shrouded mushroom garden, one of Acula's orc hoplites trod through some explosive fungus but was saved by healers.

Found a dark elf glued to a mushroom tree and goblins sitting nearby watching to see what would happen. Nahme freed him and goblins ran off after elf.

So wandered from main room and went into side rooms, former craftmen showrooms with apartments. Found a pile og glistening gold and a crown but wa just bait with a fools gold spell. Still, flunkies impressed by a pound of copper coins for beer and food.

Heard laghter and squelching and found red hatted gnomes taking turns to ride a fungus. They mentioned some sorcerers in area. Found room of drug adled aprentice sorcerers snikkering. They liked Nahme and tried to talk their lowbrow stoner philosophy with her, but she didn't care. One sneered and Acula punched him. Fight was on but arrows knocked them all out. Nahme saved them and lads scolded but she accepted they were provoked by Acula's escalation. Party needed healers to rest so others guarded.The theif (former lantern boy)  got a minor injury from a choking fungus and otherwise ok. The Tako octopus lad spotted zombies overgrown with fungi and white fungal antlers growing from their heads. Acula threw a incendry at them burning them all to death.

Last watch while scouting heard crying goblins and saw 4 black gobbos about to be sacrificed by slug men to their demon goddess. Party convinced Sorcerers to join in and the slugs went down under fail of sleep spells, arrows and summoned orc warriors. Rescued gobbos grateful. Some ethical issues over killing sleeping slug men but Acula not too worried even though he has enough ethics to stop a sacrifice. Took stone demon knife to Nahme who smashed it.

Finally healers rested for 8 hours and party on move. Found a chest on a trapdoor over piranha slug pit. Lassoed the chest and pulled up and opened to find a seductive devil stone. The Tako and Acula craved it and began to fight. Nahme grabbed it. Tako and Acula stopped fighting and glared at her. Rest of party tried to console them and Acula tried to snatch it. Nahme paralyzed him with a hold spell and the Tako cast charm on her. The thief snatched it and chucked in monster pit. Out of sight the oys returned to normal but Nahme likes the Octopus boy lots more now.

Wandered into a dry lichen room which the deemed a good camp for later. Found a huge slug monster  eating yellow cap shrooms which spat acid at Nahme. The party slaughtered it. Later found a huge mass of white tiny mushrooms growing from a great column. While the octopus got close to see If his herbalism or alchemy could identify any value, the thig opened it's eye and the thousands of year old guardian of the fungi garden attacked. Got a few slaps on party and they slaughtered it too. Acula started to feel sorry for monsters and how none of his friends were as good at murder-hobo-ing as him. Of course the dungeon gods dont like adventurer Hubris.

While still looking in niche heard some rats but these where huge grizzly bear size rats which climbed over each other to tear at party. Tako's crab man got grabbed by rat and carried off. Party formed a line and held but several went down from savage claws and bites. The theif took route back and intercepted the huge rat an back stabbed him. The rat kept running with bloody crab man (beloved Squinty). Only Acula got unscathed before rats mostly fled. He took opportunity to kill three running away but all up half of the 8 monster rats fled. Party fled back to lower levels battered and sore but intrigued by the mushroom garden.

A few began to discuss how to get out of underland and planned that Nahme could fly up to ceiling where Dwarf city had lowered them in a elevator then get them to lower down. Still a while off. Being here made them miss the Hobgoblin Halls an trying to kill Chondaru. Acula wanted to see if hi huma wivs would tolerate him being a orc. But the Citadel would keep them returning on current qust for the orc king.

Posted by Konsumterra at Tuesday, December 02, 2014