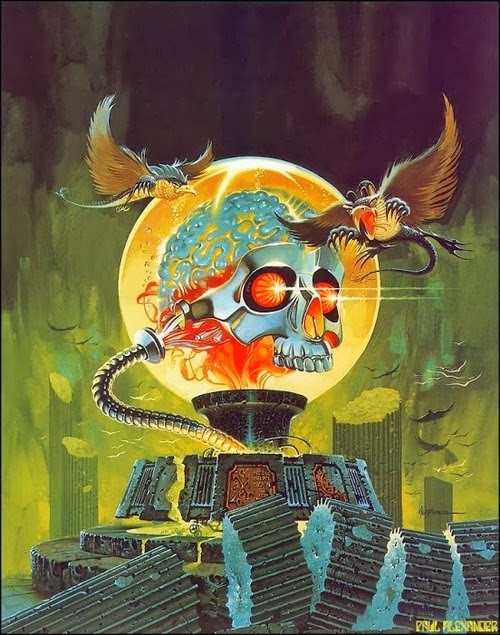 War on Planet Psychon
After working on my citadel tables the idea of what a war on Psychon might be like. Mostly as the background for adventures and for added scenery rather than to design a war mini game.  So many remnants of ancient war remain laying around and citadels and bunkers are in part made to withstand war so I though it needs addressing.

It is worth envisaging evil hordes with help from evil AI gods would be one source of conflict. Many expansive subworlds now are homes to legions of inhuman creatures, many serving deranged Death Machines or demons. Citadels may come to fight citadels and sometimes the oppressive regimes of a citadel might incite rebellion from time to time. A thriving citadel might have inter level battles or slave riots or zombie outbreaks. As crossing a hex border may be difficult without help from a god, subworld or inter levels battles might be easiest. There are floating landmasses like sky Islands, flying cities or even orbital or alien habitats possible too. I’ve been imagining more wars as my players over six months have come to get the basics of exploration on Psychon so I now need more arching plotlines that will work with regular players and drop in players.

I’ve also realized my beastman class (i guess beast folk is more pc) could describe other altered humans like tree men, ice men, magma men, devil men or many more. Which opens many possibilities for conflict. I guess original Flash Gordon serial and comics are to blame a bit here. Abhuman might be a better name.

d12 Hex War Enemy Table
1 Locals from hex have risen up to crush oppressive citadel masters who are hogging the good stuff
2 Horde manages to seasonally cross the border somehow to wreak havoc and loot
3 Flying citadel or island with raiders come to sack resources and slaves
4 Inter level block war with rebelling poor castes fighting elites for room and better conditions
5 Religious or magical or cult schism fighting to be the one true creed of a citadel
6 Subworld legions of hate serving diabolic war machines plotting destroy surface dwellers
7 Undead arising from zombie plague or necromancer or restless ancients arise to slay the living
8 Army of a distant citadel intent on seizing needed supplies or slaves or satelite states
9 Aliens invade, first espionage and infiltration then full blown invasion of the hex
10 Machine army of life hating AI has come to cleanse hex and liberate mechanoid kin
11 Beasts of the wilderness have suddenly evolved into army of human hating beastmen
12 Mutants have evolved and the new and old breeds must battle to survive

While a kingdom of medieval knights wont stand up to a tac-nuke launching Death drone for more than a second most armies have a goal and want to take something.

d12 Things to do in a war
There are many opportunities for players to interact with a war.
1 They could try to simply get through with either side killing or imprisoning them
2 They could act as peacemakers and try to resolve misunderstandings
3 They could profit by selling weapons or acting as mercenaries
4 They could loot a payroll, armoury or baggage train for personal gain
5 They could be heroes of one side performing strategic deeds
6 They could lead armies or make heroic tactical feats of battle defeat an army
7 They could seek a weapon or citadel defence system or other artefact
8 They could cross enemy lines or a trench filled wasteland as an obstacle
9 They could be spies or scouts seeking  weaknesses or reveal enemy plans
10 They could thwart enemy agents, infiltrators or saboteurs
11 They could assassinate or kidnap enemy leaders
12 They could aid civilians or refugees fleeing enemies or cut off from supplies

Troops
Mercenaries are a rough guide to what kind of freelance troops aroud. You could generate an army with them for an invading force. Local defenders could be chosen based on what local peiople and encounter tables for the hex. I will do some Psychonian heroes for hire later.

d50 Archaic Mercenaries
These are some sample troop types available for hire or could be used to create a quick army
1 Slinger troop of skirmishers, may use rocks or lead slugs or something stranger
2 Scout troops of light archers experienced at wilderness and food gathering
3 Scout riders with some kind of riding beast very manoeuvrable but avoid fights
4 Javelin troops who hurl great darts and can also act as skirmishers or scouts
5 Spearmen with shields and light armour, aggressive fighters
6 Phalanx of elite spearmen who are highly disciplined with spears,javelins and large shield walls
6 Pikemen with great phalanx and medium armour highly effective vs cavalry
7 Archers in light armour who fire in formation and darken sky with arrows
8 Bowmen elite with medium armour, two man siege artillery, shields and shortswords
9 Long bowyers with long range missiles able to direct fire great distances
10 Axemen with medium armour and throwing axes very fierce
11 Swordsmen with highly ornamental armour and great courage
12 Irregular horde with mostly improvised farm tools and long spears lacking discipline
13 Irregular force of savage berserkers lightly armoured but crazed in a fight
14 Crossbowmen with medium armour and able to perform well in melee if needed
15 Halberdier force in chain with crossbows, highly disciplined elite infantry
16 Disciplined elite infantry with many formations and a variety of specialized weapons
17 Light cavalry with lances, light armour and some kind of riding beast
18 Medea cavalry with heavier armour able to charge built up troop formations
19 Hobilars who move about battlefield on mounts but dismount for battle20 Mounted archers trained to fire while retreating, highly mobile and diciplined
20 Heavy cavalry in heaviest armour able to charge any troops or dismount
21 Light chariots with archers and javelins that skirmish and scout
22 Battle waggons designed for carrying heavy infantry to fight with support archers
23 Heavy chariots able to break formations of troops with lances and scythe wheels
24 Musket men with ranks of men trained to shoot in unison and use bayonets up close
25 Aquebuses with heavy guns that set up a position to fire on troops or locations
26 Black powder sappers with mines, demolition charges for sieges and more
27 Alchemist able to make explosives, incendiaries, smoke, medecine and other uses
28 Wizards out to prove superiority and seek to loot any books found, very dicaplined
29 Balistia crew with giant crossbows able to fire javelins with great range and force
30 Catapault can fire stones or diseased corpses or burning pitch into siege
31 Veteran templars, well armoured and fanatic holy warriors good at business and conquest
32 Immortal cavalry and lancers and archers in plate very diverse weapons and operational tactics
33 Flagellant monks with flails, sometimes diseased or real holy men, fanatic
34 Priests of good able healers and can drive off undead
35 Priests of evil commanding undead and fanatic cultists
36 Grenadiers with black powder hand  grenades, flintlock pistols, swords and breastplates on horse
37 Cannon crew with blackpowder cannon piece for siege or battlefield
38 Bombard crew for indirect fire mostly for sieges far from from harm
39 Janissary force with muskets, swords, polearms, eunuch fanatic disciplined troops
40 Landknights veteran troops with heaviest armour, guns, halberds, greatswords, grenades, horses
41 Druids with possibly berserker guards, animals or woodland magic monsters
42 Monks highly disciplined fanatics very flexible and mobile
43 Rogue gang able scouts, infiltrators, spies, assassins, for commando raids and climbing walls
44 Spies infiltrate enemy and gather information on targets or camps
45 Assasins able to infiltrate and kill enemy elites to sew chaos and damage enemy morale
46 Bards useful spies, entertainers, morale support, battle signalers, scouts and many uses
47 Paladins holy warriors who will only fight for a true cause but are fanatic and magical
48 Elephant with armour and archers in fortified howdah on back
49 Sorcerors who cast spectacular spells but are cowardly, indolent drug addicts who spread vice
50 Sabotuers infiltrate and damage food, weapons, defences, poison water and other dirty tricks

d12 Troop Variantsone in ten groups should have something extra weird