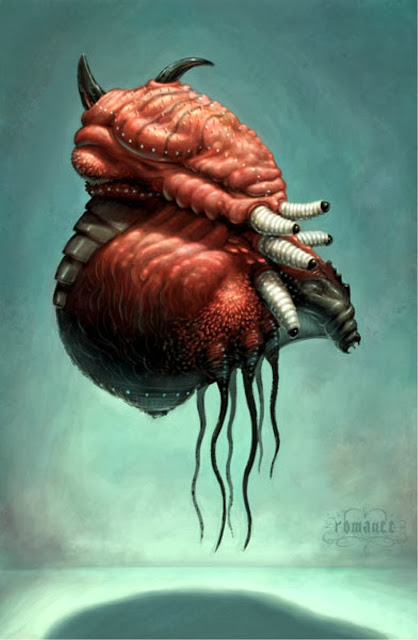 A basic session using Gamma World Albuquerque Starport module. Party spent some time looting station while some recovering spells. Killed a mutated deadly mutant plant. Gathered its explosive fruit. Re-activated power starport power, got warnings from security robots and fined. Joined by Eldren (who left his colossal riding spider with a pagoda on his back in carpark on service. Morlock cobled together some golem parts and a damaged service robot into a new golem follower using ancient robot lab and his enchanting skills. Hawkman got into admin office tailgating a cleaning bot and began his favourite hobby, button mashing on station control terminal. Priest saved him from security bot which got birdy worried enough to freeze on command. Priest put lead on him and paid fine and took his pet away.  Fined more for non updated ID, unregistered animal, out of control animal and more.

Biggest incident was when party found three sleeth snake folk. Battle was brief in ticket check section looting through as sleeth family attacked with deadly bites. Party all dogpiled pappa with blows and the new Eldren who called cherubim to his aid. Lizards used sonic blasts and many cherubs exploded. Hawks catgirl follower was killed in gory mess. Momma snake mutant and baby were talking surrender terms when Hawk flipped and killed her chopping her into several chunks with a few blows. Ctying child tried to dig face into rubble and the cherubim stopped hawk killing the child. A tense moment while Eldre sorcerer berrated bird man for killing in cold blood. Realised at this point most of part chaotic good, but the hawkman was neutral indifferent selfish. Morlock stood back, his role as party taster of everyone they meet or kill is a bit dodgy. Priest of pheonic talked hawk down. Shit got serious. Maybe gang is a better word than party.

Having cleared the airport they went into the shuttle that the goddess Pheonix had been repairing for this moment. Party looted liqueur stores and most got into pasenger pods as directed by stewardess androids. The Morlock, New Eldren, Hawkman and Pheonix Priest went into cockpit and put on hats and fancy jackets. New Eldren had been a human from 21st century and could still remember despite the gods mindhacking him with new memories of growing up on pychon. He was quite wise at explaining customs of the shuttle. Once shuttle in space, went to cocktail lounge to drink space cocktails. Morlock talked stewardess android into enabling mile high protocol in a bathroom. Damn those decadent ancients.

Allowed to level up. Morlock has dual clased now lv6 Morlock Lv2 Rogue as he has plenty of HP and kill power in melee instead he wants skills. Worked quite well.

The VIP Shuttle came into dock into the damaged teleporter array station. In hub were five teleporter platforms with controls. Hawk aw pretty jewelled consoles and started to button mash. A stream of pink screaming static formed a screaming heap of meat. The steaming corpse was a cyborg with a gun, but tech was fried and full of meat. Party could see moon and other orbitals. Grey trash ring around Psychon and the coloured hex surface below. Part of moon green.

Went into one habitable section full of grey ooze plague zombies. Killed lots and robed hotel suites of nick knacks. Druid had to heal the Birdman who used his scorpion tail on a zombie and got slimed.

Next session will finish off other wing and possibly play with teleporter. The goddess pheonix wants station decontaminated of plague zombies and networked so she can access these other worlds. Well so she can send adventurers.

I'm tempted to let adventurers maintain a orbital base and/or a vehicle or use teleporters. Akso visit a hex being transformed by gods or having an apocalypse. Need to get some more magic in game to. Perhaps some wizard in space already.

Moon has a light force field and has accrued some atmosphere. Giant moon moths have delivered seed and spoors and water was tapped by ancients. Something like Bryan Aldiss Hothouse. Ive been waiting to do some of this stuff in game since 1984.
Posted by Konsumterra at Tuesday, December 03, 2013