The Free Cities of Exilon 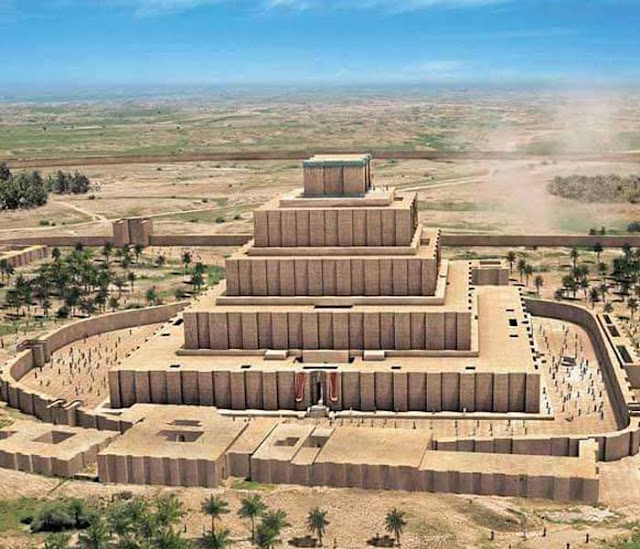 Great cults have ziggurats, biggest monuments and huge temple complexes with thousands of staff. Lesser ones have small temples and mostly shrines.

Ikathon
Seahome, City of the Sea Lords, former colony of the fish folk
An ancient city seen better days and poorly planned as it grew ad hock in the dawn age. Its great sprawling ziggurat is still used in rituals but the interior has long collapse. Some of the oldest temple in the world are here and also libraries. The ancient tongue is still taught here and more citizens use the holy script than anywhere else. Winding streets and canals some crumbling abound. The docks have ships from many lands and fleets of fishermen and these help the city gain it's famous fishy odour visitors complain of. For thousands of years fish men used this as a imperial outpost to conquer the land. The great ziggurat to Ea the house of pure water is the greatest building with the temple of Anu is not spectacular but is one of the oldest buildings made by human kind.


The bad fish folk, squid folk and sea dragon cults were eventually driven into the sea and their evil temples destroyed. It still has a tradition of knowledge and holy relics it is famous for. Some bad fish god shrines and cults are hidden in the labyrinthine city. Remains of shattered fish folk writing and statues are found everywhere. Numerous reefs and islands and a sea fort watch the bay and make the entry hard without a local guide. Familiar gods tend to have fishy or aquatic variations here. The city symbol is a fish.

Fighting Forces
Naval trireme and bireme fleet with sailors
Mainers soldiers with spear and leather who make amphibious landings
Slingers are militia sect that include males, females and all ages
Several giant snapping turtles with fortified troops on their backs
Force of marine beatmen mercenaries with fish, frog, lizard, squid and shark men
Gladiators with bronze armour, tridents and nets as independent champions
Forest Elephants with fortified troops on their backs
A champion rides a marine dragon

Great Cults of Ikathon
Ea, Lord of the Waters of the abyss, usually in fish robes with a beard
Danika, The great Fish mother, usually in her fish robes local consort
Dagon, fisherman farmer weather god and monster fighter


Lesser Cults of Ikathon
Anu, lord of the celestial court, king of the upper heavens
Ishtar, goddess of love and war also praised as navigator and pirate here
Tammuz, god of vegetation and herds, the good shepherd and defender of the flocks
Geshtianna, goddess of vines and divination
Ereshkigal, the underworld goddess, queen of vampires
Tiamat, the old sea goddess, mother of monsters and gods
Marduk, son of Ea, god of law and power
Nebo, scribe of the gods
Sin, the moon god, merchant traveller
Shamash, the sun god
Nammu mother of the primal waters

Hadderad
Stormhome, City of sky gods, occupied by barbarians now civilised
Once a agricultural city it was conquered by barbarians who in turn became civilised and this tends to happen every three generations. They frequently trade with and hire barbarians. Mostly they worship gods of the air and sky and war. The buildings and art is cruder and newer than other cities but great public works and walls are still under construction. The streets are dusty, dirty and animal filled. Bird and beasts of all kind are pets. The royal family are dynamic leaders and have many satellite forts over their land. Their greatest arts are war and metallurgy. They are famous for war chariots and mercenaries. The city is in many ways more willing to try new things and elevate commoners and the brave to high office by merit. The cult favours deities in manifestations as sky beings and the city symbol is a winged bull. The greatest building is the Ziggurat of Enlil the house of the Heaven and Earth.

Fighting Forces
Barbarian Allies, irregular light force good for skirmishing and scouting
Berserkers, elite barbarian irregular fanatics
Chariot Corp of 400 chariots, half light, half war chariots that move in royal guard
Royal Guard are chosen from most loyal barbarians in the heaviest plate armour
Elite Archers with formations of composite bows, very feared
Infantry with spear and wicker shields and leather of city free men
They have several heroes riding giant eagles
One hero has a winged bull from the gods
One hero has a huge war chariot Juggernaut pulled by 8 oxen
Magicians include priests, wizards, marine druids, often use water elementals


Great Cults of Hadderad
Enlil lord of the middle air, the earth, the underworld, the great king of heaven
Ninlil lady of wind and fields, queen of the heavens


Lesser Cults of Hadderad
Ninhursag the earth mother goddess
Nergal lord of pestilence, war and famine, the ill wind
Ninurta hunter warrior god kills monsters aids the commoners
Gula healing goddess, mother of dogs, wife of Ninurta
Adad lord of the lower air, storm god, aids farmers and warriors
Anu the father of the goods and ruler in the heavens, the pole star
Ea brother on Enlil, god of water, purity and words
Ninanzu underworld and healing son of Enlil
Ereshkigal underworld godess who spawned demons with her father Enlil
Ishtar goddess of the dawn star, goddess of love and war
Anzu the great demon bird who stole the tablets of destiny
Antu the clouds are her breasts, goddess of sky, rain, upper heavens, wife of anu
Asag the giant who attacked the gods with a race of rock demons he spawned

Kithak
Sunhome, City of the sun god and his kin, home of the first first mortal kings
This orderly city revolves around the great sun ziggurat and palace of the first king. Many great processional roads and shrines to the gods are common and religion is very important. A new king is selected each seven years by the high priest from candidates to act as war leader and protector. Bad rulers are burned, the good ones are retired as hermits in monasteries and parks. Many great gold treasures, statues and devotional items come from here and many kings come to visit to authenticate their kingship. Impurity, mutation and deformity are frowned on and exclude with these taints from nobility and the church. Their courts and legal processes have been copied by other kingdoms. The gods aided humans establishing this city after the age of darkness and it is mostly free of witchcraft and evil cults. Burning and drowning witches is not uncommon. Mostly of the gods are kin of the sun god and the city symbol is a sun symbol. The greatest building is the ziggurat of Shamash the house of the sun.


Fighting Forces
Phalanx spearmen the best freemen fighting force in the land bronze armour
Chariots Corp of 200 clumsy heave chariots pulled by onager
Archers with self bows in formation, also swordsmen
Slingers are militia sect that include males, females and all ages
A number of heroes have huge pet lions run aside their improved chariots
Scorpion men guardians of the sun
Magicians include priests often using sun or fire magic with fire elementals

Greater Cults of Kithak
Shamash, the sun god, the helper of supplicants, all seeing one, king of kings
Ishtar, the dawn star, goddess of war and love

Kassus
Maidenhome, Great city of the goddesses and amazons
This great citadel towers over the plane and has m,any levels. Great barracks for women and pens for their men fill the city with houses granted for mothers and their families and servants. Many eunuchs and men who live as women live here and receive status of women. Slaves are men and belong to a amazon household. No free men unattached to a amazon house hold exist. Some men particularly barbarians are invited to mate with amazons but many evoke gods for children which is why there are male cults in the city often run by eunuch priests and attached to greater temples to goddesses. Much of the city is enclosed and built over almost like a single colossal building around the great round ziggurat of the earth goddess. Statues of goddesses and women and childbirth are common, depictions of males are rate and mostly in shrines. The city is very ordered and clean and anything out of place has amazon myrmidons investigate. The queen is also the high priest of the earth goddess with a assembly of wise women, priestesses and generals. Women, religion and war are the cites main themes in art and. As a post monster epoch city it is modern and everything is in good condition since amazons settled 400 years ago. They still deal with their Sythron women tribal kin and people move between the city and the Sythron tribes frequently. The city favours goddesses but some male gods feature in their legends and even bring the amazons children. The city symbol is a unicorn. The greatest building ts the Ziggurat dedicated to the Amazons which predates their occupation of the site, a round breast shaped structure with intricate relief art.

Lesser Cults of Kassus
Ea lord of water and wisdom
Tammuz lord of fertility
Girra god of fire and purity
Tiamat the dragon queen
Sin the moon god
Nammu mother of primal waters
Anu the pole star, lord of the upper heavens
Ninkasi the tavern barmaid and brewer goddess
Ninshubar the servant of Ishtar who aids the goddess and is her best friend

Sakasis
Snakehome, City of the good snake gods, once snake city now free
Labyrinthine ancient city was ruled by serpent man for an aeon and the remains and ruins of their works are every in the city. While evil reptilian gods are long banished their works are everywhere. Snake charmers and pet snakes are everywhere in the crowded streets. Canals and irrigation ditches are everywhere. Naga and hydra live in some temples worshipped as divine. The snake market sells snakes as rat catchers and home security. Mongooses are popular also as protectors against bad snakes. The city has greatest orchards and fertile farmlands. Cutting of trees is forbidden here and hurting snakes not attacking you is bad luck. Wine, drugs, dried fruit and medicine are used in rituals and exported. Naga and other snake beings are used as guards, tutors, healers and are used in the cities defence. The city has ancient libraries going back to the dawn age.

Many gods have a serpentine aspect with underworld qualities. The city symbol is a horned snake often with a beard sometimes a hydra. All kinds of snake creatures are kept in holy places but snake men mostly reviled now. Some evil snake cults survive. The greatest building is the Ziggerat to Ningizzidda with temples to Tammuz and Geshtianna.

Greater Cults of Sakasis
Ningizzida lord of the good tree, god of underworld, vegetation, healing and wisdom
Tammuz god of vegetation, herds and fertility
Geshtianna scribe of heaven and the underworld, goddess of dreams and wine

Lesser Cults of Sakasis
Ninurta the monster hunter, helper of farmers, drove away the bad snakes
Ishtar goddess of love and war
Ishtaran god of Justice and borders, linked to snakes, scorpions and soothsayers
Gula the healer and mother of dogs, wife of ninurta
Tiamat the dragon mother goddess, underworlds
Ninanzu draconic underworld farmer war god father of snakes
Ninhursag the earth mother goddess often portrayed with a snake head
Ea the water god in his form as a ram horned snake or turtle
Naga cults worship these common lesser divinities kept in sanctuaries and shrines
Posted by Konsumterra at Monday, December 17, 2018